Midweek Miscellanea: The Cream Is Already Rising to the Top

Only three weeks in, and in my mind the pecking order is already set, with the Chiefs and 49ers occupying the top tier; tier 2: Packers, Seahawks, Bills, Steelers, and Titans (all 3-0), and the Ravens (2-1) and Saints. The Bears (with Foles at QB), and Cowboys (with a wealth of talent), join the Rams, Cardinals, and the 1-2 Saints in Tier 3. Injuries of course are bound to cause some shuffling to occur in the course of the season.

The first half of the Pack’s 2020 schedule was supposed to be more challenging than the second half. But that was before the Pack nailed down wins in two of the league’s (previously) loudest venues: Minnesota and NOLA. There’s Houston, but they are surprisingly winless, on Week 7 and the Niners in Week 9 – both away games. Otherwise, things look fairly smooth the rest of the way: no Seahawks, Bills, Chiefs, Steelers, Ravens, or Rams. The schedule does have two meetings with the (3-0) Bears, and one with the 3-0 Titans, as well as an encounter with Tom Brady and the Bucs (2-1). All in all, a repeat of last year’s 13-3 isn’t out of the question.

League parity seems to be lacking this year. After three weeks, there are still seven undefeated teams and seven winless ones. 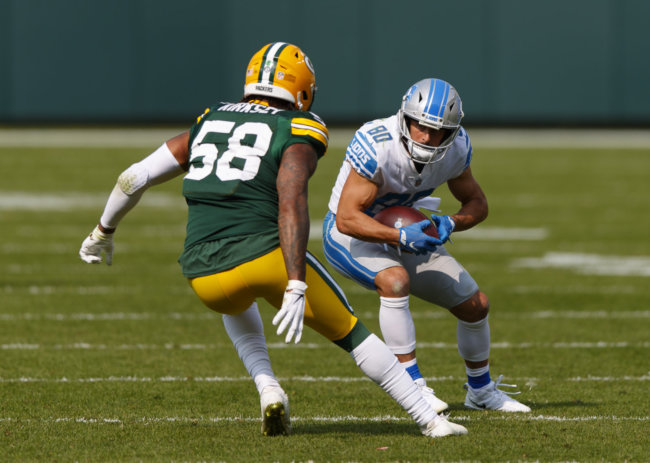 The news that Christian Kirksey, who’s essentially the team’s middle linebacker, will miss a number of weeks due to a shoulder injury is devastating, but there is some time to regroup and make adjustments. Speaking of replacement needs, let’s credit commenter extraordinaire Howard with this prescient posting, which TP ran on September 17: “ If Clark is gone for an extended time, and hopefully that is not the case we should maybe look or hope for Billy Winn to be a good FA pickup. Winn may help in plugging the middle of the run defense, if he can stay healthy.” Lo and behold, the 8-year veteran soon joined the Pack’s practice squad, and then was elevated to the team roster on September 26. The big defensive lineman missed all of last season with a triceps injury. Winn did get six reps against the Saints, and the 305-pounder even made the stat sheet, with one pass defended.

Referring to my Packers alumni report, “Rick” replied with a further list of ex-Packers, who I believe are mostly on other teams’ practice squads. He included Jake Kumerow and labeled him as being with the Bills. While he wasn’t on the original practice squad group formed on September 6, media reports say he was officially added on September 8. If he gets released, I would think the Pack would retrieve him, as they are woefully thin at wide receiver.

After three games, Green Bay is the only team without a giveaway – how’s that for discipline and precision? With their two interceptions and one fumble recovery, the Packers are +3 in turnover differential.

Is it just me, or are Green Bay’s edge rushers, who I assume are primarily the Smiths, consistently looping to the outside and trying to come up on QBs from behind? This leaves QBs with clear lines of vision, prevents rushers from knocking down passes, and allows QBs with running ability to take off running at will. Especially with a QB like Brees, you’ve got to take a more direct route. We need more bull rushes, spin moves, hand to hand combat, and stunts to get by blockers. Preston Smith (6 tackles, 1 QB hit on the season), in particular, looks to be in a rut.

On Monday the leagues’ top-scoring offense (our guys, at 40.7 points per game) goes up against the worst defense, Atlanta, averaging 36.0 points allowed. Rodgers and his troops must be salivating over the prospect. On the other hand, the Falcons lost by only one point to the Cowboys, 4 points to the Bears, and 13 to the Seahawks – three opponents with a combined 8-1 record. Matt Ryan, who’s a year younger than Rodgers, has passed for 961 yards, behind only Dak Prescott (DAL) and Josh Allen (BUF). Rodgers, at 887 yards, sits comfortably – especially for a run-oriented team – in sixth place.