Looking Ahead to Packers vs Vikings

The Packers enter the game coming off a 35-20 win against the Houston Texans. At 5-1, the Packers lead the NFC North by a half-game over the Chicago Bears. The Vikings have lost two straight and are in the basement in the division at 1-5. Green Bay has won the last three games between the two teams, including a 43-34 shootout earlier this season. Nothing is guaranteed in this sport, but the odds strongly favor on the Packers on sites like bet-nj.com

Comparing the two teams statistically, the Packers average 32.8 points per game and allow 26.5. The Vikings average 25.8 and are among the worst defensively, giving up 32 points per game. The Packers are 6 ½ -point home favorites in this game.
Aaron Rodgers is having another stellar season, throwing for 1657 yards, 17 touchdowns and only two interceptions. His favorite target continues to be Davante Adams, who has 36 catches for 449 yards and four touchdowns, despite missing time due to injury.

On the ground, Aaron Jones is averaging 5.2 yards per carry and has 389 yards. However, he missed last week’s game and did not practice so far this week due to a calf injury. Jamaal Williams stepped in for Jones and has 219 yards on the season, averaging 4.2 per carry.

On the defensive side of the ball, Za’Darius Smith leads the Packers with six of the team’s 15 sacks. The Packers haven’t been adept at forcing the turnover, having intercepted only two passes with five forced fumbles. The kicking game is in the reliable right leg of Mason Crosby, who has converted on all nine field goal attempts.

For the Vikings, quarterback Kirk Cousins has thrown for 1475 yards and 10 touchdowns, but he has been intercepted 10 times and sacked 14 times. Adam Thielen is the obvious main target, with 32 receptions and seven touchdowns. Justin Jefferson provides a deep threat with 28 catches for 537 yards, but no other receiver has more than 10 receptions for the season.

On the ground, the Vikings like to feed the ball to Dalvin Cook as often as possible. He leads the team with 489 yards with a 5.3 average gain per attempt. Alexander Mattison has been an excellent complimentary back, rushing for 245 yards on 54 carries.

Defensively, the Vikings rely on a pass rush led by Yannick Ngakoue, who has five of the team’s 13 sacks. The team has three interceptions and six forced fumbles, but have been porous all year, ranking low in yards per game and scoring allowed. Kicker Dan Bailey has been inconsistent, hitting six field goals, but missing twice.

The Vikings need to find a way to pull off an upset or the season will be all but over less than half way in. Their best chance is to control the ball with the run, eliminate turnovers and keep Aaron Rodgers and company off the field as much as possible. 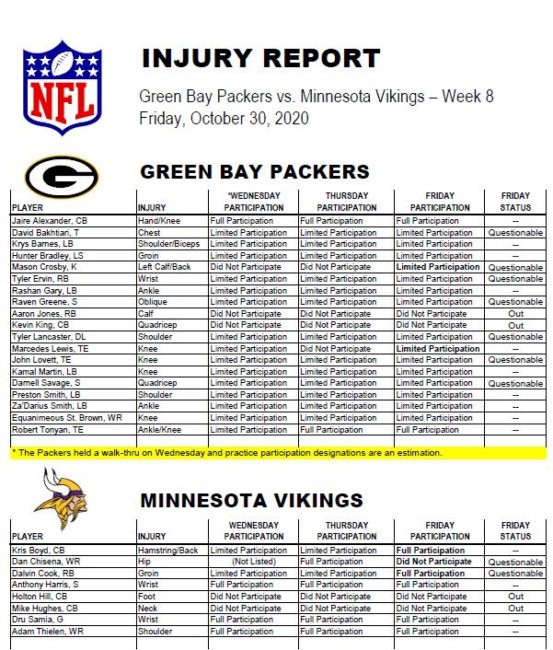 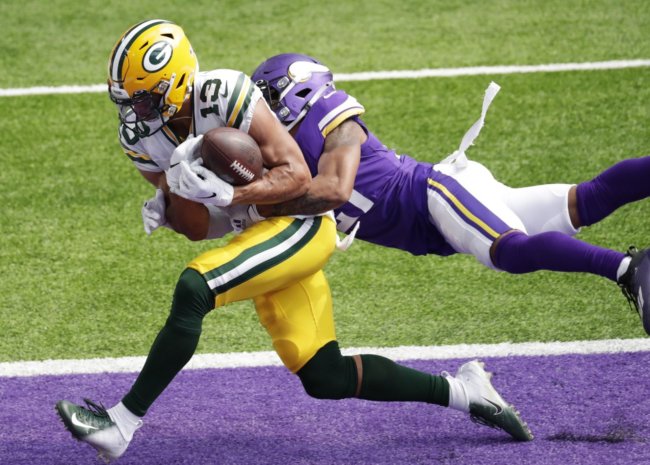