The Green Bay Packers are coming off a 43-34 victory over the Minnesota Vikings. They are a six-point home favorite this weekend against the Detroit Lions, who fell to the Chicago Bears by the score of 27-23. Always a great match up, the Packers won both games between the teams last season by tight margins of 23-22 and 23-20.

Aaron Rodgers and the Packers’ offense got off to a blistering start in week one. Rodgers threw for 364 yards and four touchdowns, completing a gaudy 72.7 percent of his passes. The attack was well-balanced as Aaron Jones led the team with 66 of their 159 yards on the ground. Davante Adams had a career day, hauling in 14 passes for 156 yards and two touchdowns. Marquez Valdes-Scantling and Allen Lazard combined for 10 catches and for 159 yards and two touchdowns. Mason Crosby was in midseason form, drilling both field goal attempts.

Defensively, the Packers showed weakness against the run, allowing 134 yards and two touchdowns at 6.1 yards per carry. That could be troublesome against the Lions, who ran for 138 yards against the Bears with newly acquired future Hall of Famer Adrian Peterson accounting for 93 yards on 14 carries.

The Lions offensive attack is led by quarterback Matthew Stafford, who passed for 297 yards and a touchdown to tight end T.J. Hockenson, who was on the receiving end of five passes for 56 yards. Danny Amendola also had five receptions, stretching the field for 81 yards. Kicker Matt Prater hit three field goals, but missed on an attempt from outside of 50. Detroit had a difficult time getting pressure on the quarterback last week, which means Rodgers could have another field day.

The over/under on this game sits at 49, which is a little above last year’s average combined scoring output between the teams in their two games. There is little to indicate the Lions can slow down the Packers dominant passing game. They also allowed over 150 yards on the ground. Similarly, Detroit likely will be able to move the ball as well. The game has the feeling of one that will go deep into the fourth quarter with the outcome in question. But that is typical for a NFC North contest, right?

The Packers enter Week 2 on a six-game regular season win streak, the longest current streak in the NFC

Last season, Green Bay swept the regular-season series with Detroit for the first time since 2016 and for the 11th time in the last 20 seasons (since 2000)

QB Aaron Rodgers has led Green Bay to eight wins in 10 starts at home against Detroit, throwing 19 touchdowns with just four interceptions and a passer rating of 106.8 in those games

WR Davante Adams has five receiving TDs in eight games played against the Lions, including one in each of the last two games he played against Detroit

In his first season leading the Packers in 2019, because the first coach in club history to lead the team to the playoffs in his debut season. LaFleur also led the largest one-year win improvement in team history (plus-seven wins) 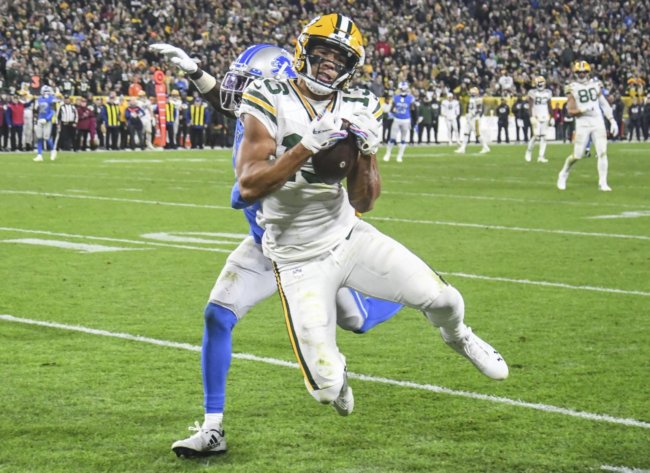