Having already seen off a pair of division rivals in the opening two weeks of the season, the Green Bay Packers face their toughest task of the campaign on Sunday Night Football as they travel to New Orleans to take on the Saints.

The hosts opened as a 6.5 point favorite when the first odds were released, but after the 34-24 defeat to the Las Vegas Raiders on Monday night, the line is now at 3.5. Even though three points have been taken away from Green Bay in the point spread market, there still may be some value in backing the Packers given the offensive prowess they have shown thus far.

Things are continuing to look up for Matt LeFleur, who hasn’t overseen a regular season defeat as Green Bay’s head coach since the San Francisco 49ers – who also knocked the Packers out of the playoffs in January – beat them in November 2019.

Tight end Robert Tonyan caught a touchdown pass, and Chandon Sullivan’s pick six completed a satisfactory overall performance from the Pack albeit not against the toughest opponent they’ll face all year.

The sportsbooks are clearly impressed, though. Having been +2800 for the Super Bowl at the start of the season, Bet365 have cut the Packers’ odds to +1600 to lift the Vince Lombardi trophy in February.

New Orleans are +1400 to win their first chip since 2009, which is a drift from the +900 price that was on offer before the Raiders game. The injury to Michael Thomas certainly doesn’t help them in the short to mid term, and the Saints know they need to avoid rushing him back, as high ankle sprains are not easy to fully shake off.

Alvin Kamara, on the other hand, is fully fit and in fine form, and that is something that must remain the case if the Saints are to seriously contend this season. With both Green Bay and New Orleans possessing elite running backs and future Hall of Fame quarterbacks, prime time viewers on Sunday night are sure to be entertained.

The total points over/under line is currently 51.5 points. The over has landed in each of the teams’ first two games of the campaign, and it would be no surprise to see that trend continue this weekend.

You can back the Packers at +160 to win the game, and if they can do so, they would move to 3-0 and remain in pole position in the NFC North.

Many considered the Minnesota Vikings to pose the greatest threat to Green Bay winning the division, but it is in fact the Chicago Bears who joined the Packers at 2-0 thanks to their 17-13 triumph against the New York Giants on Sunday afternoon at Soldier Field. 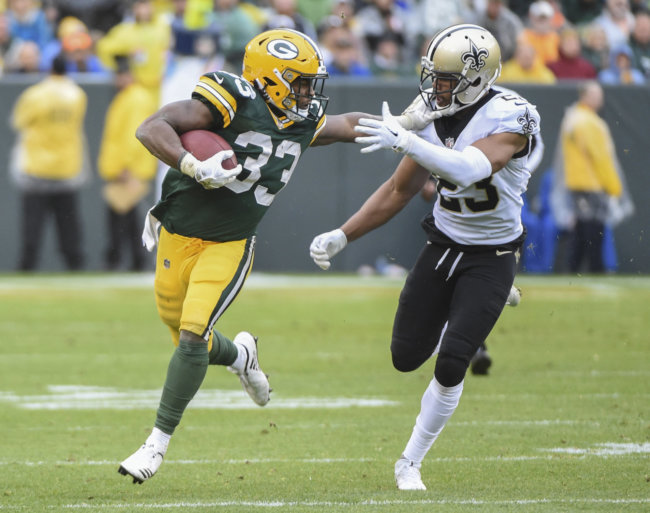 Previous Article
A Surgical Look at Aaron Rodgers’ 2020 Performance
Next Article
Midweek Miscellanea: Without Michael Thomas, the Saints Are Vulnerable