Let’s Salute Nine Guys Who Overachieved in the Big Easy

Each NFL roster has its share of non-achievers. Some are just out of college, or have gotten precious little playing time in the pros. Some are players fans have never heard of – and from colleges without strong football programs. Some probably lack the size, strength, or speed to ever become other than standbys or fill-ins.

They are misfits, also-rans, hangers-on, marginally ping-ponging back and forth between the team’s practice squad and roster. They don’t appear to have what it takes to scratch out a career in the big league.

Well, on Saturday evening, it was a motley crew of Packer no-names who emerged from the depths of obscurity to play meaningful roles on Sunday evening. By my count, nine such overachievers contributed to one of Green Bay’s most stirring wins of the last five years.

I think Ty Summers got his first-ever snaps with the defensive unit – he wound up on the field for 44 out of 58 defensive plays. Out of TCU, he was plucked in the final round of the 2019 draft. All he did in quite limited time was tie for making the most tackles at nine, six of which were solo efforts.

The there’s Krys Barnes, a complete unknown when the season got underway. The undrafted rookie, who seems to have come out of nowhere (though actually UCLA), matched Summers’ nine tackles, and did so in limited defensive snaps (28%).

Contributing four tackles to the cause were a couple of others who have seldom previously made significant contributions. One was Will Redmond, who’s been hanging on by a thread in the pros since being drafted by the 49ers in the third round in 2016.

Also recording four tackles was a guy who’s been a whipping boy for pundits and fans alike since being drafted in the third round in 2018 by GM Gutekunst. Out of Vanderbilt, Burks began his third year with the team as a non-entity. He changed that, at least for this one shining game. Well done, Oren Burks.

Who was the Pack’s premier pass rusher on the night? Not Smith or Smith. Instead, the guy getting two sacks – the only two sacks of the quick-pass king on the night – was none other than Kingsley Keke, who was selected in round five in 2019, and who barely got onto the field in his rookie season.

Last, but not least, of Green Bay’s unsung defenders is Chandon Sullivan, a third-year man who went undrafted out of that powerhouse, Georgia State. Though he was only credited with two tackles, he’s been out there for at least 69 percent of the defensive snaps for all three of this season’s wins.

On the offensive side, let’s start with Allen Lazard. Though he’s been called upon increasingly since Week 6 of 2019, not many would have thought he was ready to step right into the shoes of Davante Adams, WR1. Allen went undrafted a year ago despite having a fine career at Iowa State. He even initially failed to make it onto the team’s roster a year ago. The target of eight of Rodgers’ lasers and bombs, he put up these numbers: six catches for 146 yards and one TD, including a 72-yard game breaker right after the start of the second half. His previous highs were five catches and 103 yards.

Robert Tonyan, in his third year out of Indiana State, is yet another undrafted member of the team. His previous best production had been 28 yards, in Game 1 of last year, and his NFL total going into Sunday’s contest was but 12 catches, for 125 yards. Big Bob busted out against the Saints, with five grabs in as many targets, and for 50 yards and a TD. Between them, Lazard and Tonyan accounted for 196 of the Packers’ 283 passing yards.

The Packers’ third best receiver on the night is my ninth over-achiever: Jace Sternberger. Not only did he hold onto his first NFL regular season reception, he was a perfect three out of three, winding up with 36 valuable yards. Aaron Rodgers singled out the importance of his play for the future, saying that both the receiver and Aaron himself were starting to lose confidence in a player who Gutekunst invested a third round draft selection a year ago.

It was Lazard who set up Green Bay’s first TD with his 48-yard reception, and who hauled in the 72-yard bomb setting up the go-ahead score early in the third quarter. And it was Tonyan who delivered the dagger with his 5-yard TD with two minutes left in the game. There simply aren’t enough game balls to go around. 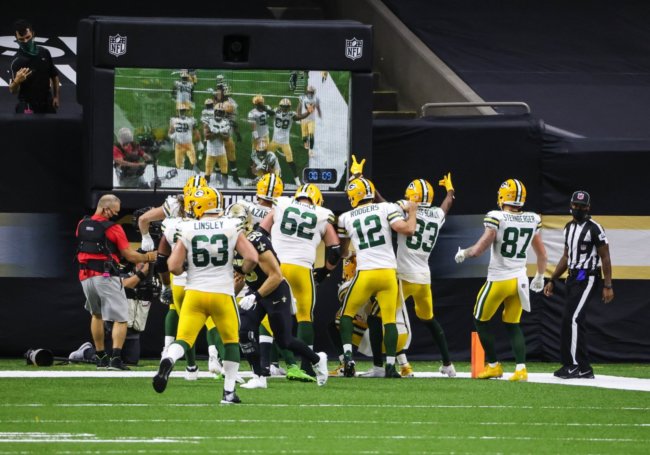 Sep 27, 2020; New Orleans, Louisiana, USA; Green Bay Packers players celebrate in front of the showtime cam after a touchdown against the New Orleans Saints during the second half at the Mercedes-Benz Superdome. Derick E. Hingle-USA TODAY Sports

A number of these players might not even make the team’s roster next year. Few are likely to have an NFL career of more than five years. But for now that doesn’t matter. On this one glorious evening in the Superdome, these nine guys rose to the occasion, catapulting the team to a 3 and 0 start, and positioning the group as an early and strong favorite to win the division and advance deep into the playoffs.

Just 15 days into the season, the Pack are tied with the Bears, who have pulled off three near-miracle comebacks – by a margin of four points each. The Pack is already two games ahead of the Lions, and yes, they have a 3-game lead over the reeling – and pretty much defenseless – Vikings, who were favored by some to win the division.

The Packers won’t face the Bears until November 29 at Lambeau, and then again to close out the regular season on January 3.