Midweek Miscellanea: Without Michael Thomas, the Saints Are Vulnerable

Note: Hey TP readers, there’s so much going on in this unprecedented NFL season that throughout the season I’m going to try to provide a midweek post (usually on Wednesdays) consisting of lots of various stats, quotes, and other brief tidbits that might be of interest to Packer fans. By doing so midweek, I’ll be able to take a look back on last weekend’s games and a look forward to the Packers’ (and others’) upcoming opponent.

Saints are minus Michael Thomas. I’m sensing déjà vu. In Coach LaFleur’s rookie season, he got a big break when the team traveled to Kansas City in Week 8 to face the powerful Chiefs. The Chiefs were without the league’s best QB, and the underdog Packers went away with a 31-24 win. On Sunday, the Pack travels to New Orleans, and the Saints will almost certainly be without the services of the league’s top receiver, Michael Thomas. Just a week ago, his injury, reportedly a high ankle sprain, was said to require weeks of rest. . .Besides missing Thomas, the Saints should be without their cherished home field advantage. Though the State of Louisiana said it would allow fans, Mayor LaToya Cantrell is holding firm on her edict of no fans while the city is in Phase 2 of its Covid-19 recovery response. Unlike the bigwigs of the Big Ten, it doesn’t look like she’ll back down. 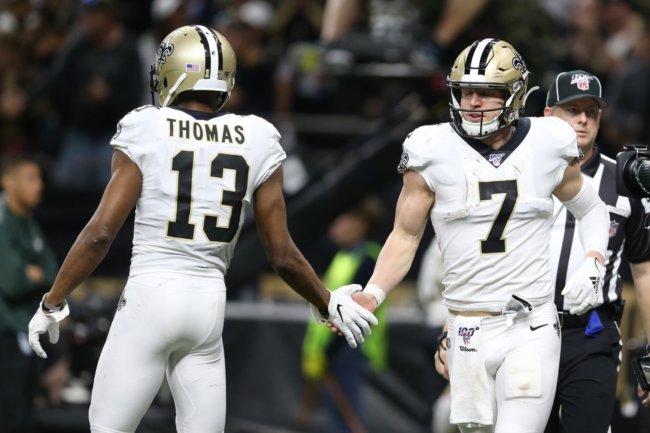 Cousins lays an egg. How bad was it for Minnesota’s Kirk Cousins in Week 2 against the Colts? The QB had a zero passer rating until late in the game when he rallied and finished at 15.9. His line was 11 of 26 for 113 yards and three interceptions. The Colts, by the way, went only 7-9 last year. As Coach Zimmer explained, Cousins “didn’t play very good.” He added “Right now we’re not very good at anything.” Way to rally the Troops, Zim!

Speedy Gonzalez. Last week I reported that four Green Bay players were in the top 16 of Next Gen Stats’ “Fastest Ball Carriers” list of Week 1. In Week 2, a fifth Packer made the list, at number 8: Aaron Jones was measured at 20.66 mph during his 75-yard TD romp. Forget about his NFL Combine dash time of 4.56 seconds – Aaron doesn’t get caught from behind.

Last-second wins. Both Seattle and Dallas avoided losses with game-ending heroics. New Patriots’ QB Cam Newton had his new team on the one-yard line with three seconds to go and down by 5 points in Seattle. They chose to have Newton take the snap from the shotgun in an essentially empty backfield, and Newton was flipped onto his back behind the line of scrimmage. . .In Dallas, the Cowboys needed an on-side kick recovery with under two minutes to go to set up a field goal on the game’s final play for a 40-39 win. The hapless Falcons special team watched as the on-side effort dribbled until it went ten yards, and the Cowboys then fell on the ball.

LaFleur’s fast starts. Some of us predicted that the Packers varied offense wouldn’t be fully operational until Coach Matt’s second season. Two weeks in, the Pack has produced 1,010 yards of offense, which leads second-place Dallas by 60 yards. They rank first in rushing yardage (417) and fifth in passing (593). They also got off to a fast start in 2019 – while facing these same two teams to open last season, they compiled 967 yards, 403 on the ground and 564 in the air.

I’m not joshing you. How high was Ted Thompson on safety Josh Jones, his second round draft pick in 2017, his final year as Packers’ GM? “He’s athletic, he can run like the wind, he can be used in the slot as a cover guy, he can be used in the box as a run defender. He can be in the deep part of the defense and play in the deep middle. I think he’s going to surprise people when they see what he can do,” said Ted after that draft. Two short years later, the team cut ties with the embattled player, releasing him with a non-football illness designation. . .But wait, starting at strong safety on Sunday -but for the Jaguars – Jones recorded seven tackles. I guess it just took a while.

More bad news in Minnesota. That Vikings “new-look” defense is looking worse and even worse. Following their loss to the Colts on Monday, the team announced that linebacker Anthony Barr tore a pectoral muscle and will go on Injured Reserve and miss the remainder of the season.

A reunion in New Orleans. Drew Brees might be throwing to as many as three ex-Packers on Sunday. Jared Cook has 7 catches for 93 yards and one TD after two weeks. Ty Montgomery has two catches for 25 yards. Taysom Hill has one catch for 14 yards, and he’s also rushed five times for 21 yards. Additionally, he’s completed his only pass attempt – on a trick play to Alvin Kamara for 38 yards.