Looking Back, and Looking Forward to Week 2

It’s that time of year that I don’t get a lot of sleep – I keep waking up to images of green and gold.

Week 1 went almost too smoothly for the NFL. We’ve seen any number of colleges suddenly have half a dozen or more of its football players test positive for the virus. We’re bound to eventually have such an outbreak in the NFL – I’d put the L.V. Raiders high on that potential list. To have that many players go into quarantine for two weeks or more would be a deadly blow to any team’s prospects. However, following Week1, I don’t believe any NFL player tested positive for the virus.

Even in a game as critical as the opener against the Vikes, Coaches LaFleur and Pettine were determined to give some reps to as many players as possible. Could it be that LaFleur is so forward-thinking that he’s trying to have second-stringers prepared to solidly contribute should such a calamity occur?

I suspect that all teams are doing their best to keep players’ off-field interactions to a minimum during their non-team free time. I wouldn’t be surprised if teams go back to the nightly bed checks that Lombardi used back in the 60’s – not that they kept Hornung or McGee in check. Here’s a new aspect of “teamwork”: every player has a personal responsibility to not bring in a virus from the outside that runs rampant through the locker room.

A final thought on the game in Minnesota. On December 23, Green Bay snuck up a bit on the Vikings, whose record at U.S. Bank Stadium since it opened in 2016 had been a daunting 23-7, and 3-0 against the Packers. Green Bay’s convincing 23-10 win obliterated Minnesota’s home-field dominance.

As of Sunday afternoon, Zimmer’s guys now sport a 3-game losing streak in their mammoth enclosure – as well a 3-game bad streak versus the Packers. You take away that home-field edge – which LaFleur’s guys have done – and the Vikings are an ordinary team. 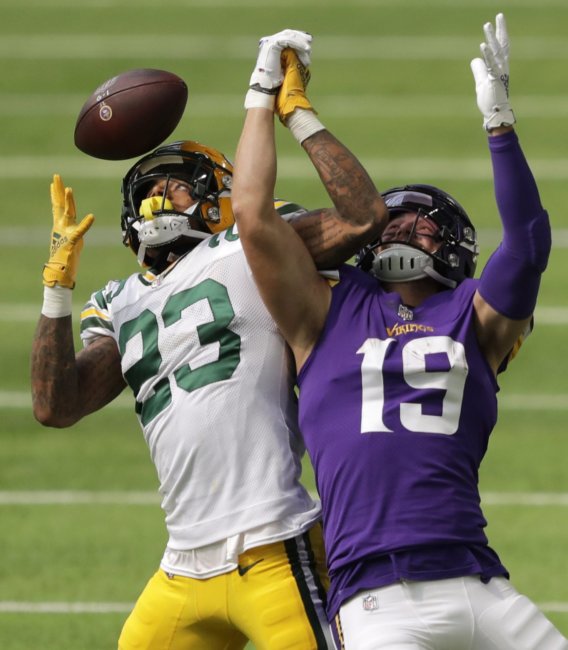 Make no mistake, ever since QB Matthew Stafford started in his very first game with the Lions in 2009, he’s been the engine that makes Detroit go, or stumble. Whether under Coach Jim Schwartz (5 years), Jim Caldwell (4 years), and now Matt Patricia (3 full years), the Lions live or die based on their passing game.

After a down year in 2018, in which Stafford failed to pass for his customary 4,000 yards, he was having a bounce-back campaign in 2019 until he suffered spinal fractures which sidelined him for half the season. Until then, Stafford had started 136 straight regular-season games – the sixth longest streak ever by an NFL QB. Stafford’s career passer rating of 89.3 is so-so – he’s only reached triple figures once, in his truncated 2019 season, at 106.0.

Despite all his passing exploits, Stafford has led the Lions into the postseason only three times. Now in his twelfth season, he’s still winless in the playoffs.

Stafford has found a new star receiver in Kenny Galladay .The three-year veteran, drafted in the third round out of North Dakota and Northern Illinois, has put together two consecutive 1,000-yard seasons. Last year he had a mediocre 65 catches out of 116 targets, but he averaged 18.3 yards per catch and scored 11 touchdowns. He’s an average athlete, but a big target at 6’4” and 216 pounds.

Due to a hamstring injury, Galladay missed the team’s narrow loss to the Bears last week. As of Thursday, he was reported as “making progress but still not practicing.” If he plays at all on Sunday, he should be quite limited.

Against the Bears, Stafford had to settle for throwing to 34-year-old Danny Amendola (5 catches for 81 yards), second-year TE T.J. Hockenson (5 for 56, 1 TD), and veteran Marvin Jones Jr. (4 for 55). Detroit’s top rusher is none other than 35-year-old Adrian Peterson, who gained 93 yards on the ground in 14 carries, for a fine 6.6-yard average – I guess he still has some juice.

Unless the Packers’ defensive backs let us down, the Packers should celebrate a solid win in their empty stadium. The team also needs to have a steady and effective pass rush against Stafford, however, as he can stack up strings of completions when he gets comfortable in the pocket.

The Friday Injury Reports are in. For the Lions, both WR Kenny Golladay and 30-year-old CB Desmond Traufant did not practice on Friday, and each is reported to be “out” against the Packers. Due to injuries, Lions’ rookie cornerback Based on the team’s depth chart replacing Golladay will likely be Quintez Cephus, drafted in the fifth round this spring.

Replacing Traufant could be Darryl Roberts, a seventh-round pick in 2015 – or rookie Jeff Okudah might get his first NFL start. Out of Ohio State, Okudah isn’t your typical rook – he was the third overall selection in this year’s draft.

For the Pack, Kenny Clark and Josiah Deguara did not practice on Friday. Clark has been ruled out, though I believe such a determination has been made for Deguara. However, the injury picture favors Green Bay, which has experienced replacements at both positions (though not of Clark’s caliber), while the Lions lack players of similar ability or experience to replace Golladay or Traufant.

The Packers look to catch a break in Week 3 when they travel to New Orleans: the league’s top wide receiver, Michael Thomas, reportedly will miss the next few games with a high ankle sprain. In his absence, Davante Adams arguably takes over as the league’s top healthy WR – some notoriety he has richly earned. Fans of Atlanta’s Julio Jones might disagree, but it’s about time for the 10-year vet to pass on the torch.

Did you catch A.J. Dillon’s first NFL carry? With 6:04 left in the first half, he headed upfield and moved back both of All-pro linebacker Eric Kendrick’s feet by a by a yard. Dillon outweighs Kendricks by a good 15 pounds – think of what he’ll do when he’s one-on-one with a defensive back.