I’d say the opening week of the NFL season was worth the wait.

The two opponents the Packers are likely most concerned about are the Vikings and the 49ers. In the space of a few hours, each of those rivals suffered a loss – and in each case it was a home defeat.

Most of the Packers’ toughest matchups occur in the first half of the season. If Green Bay reaches the midway mark at 5-3 or 6-2, they might well match their 13-3 regular season record that LaFleur achieved in his first year as head coach. A lot of prognosticators who picked the Packers to go 8-8 in 2020 appear to be underestimating Coach Matt’s abilities.

With all the unknowns caused by the virus, such as an abbreviated training camp and no preseason games, I figured that the teams with the most organized, disciplined, and savvy head coaches would come out of the blocks the fastest. LaFleur has all those traits, so I anticipated he’d handle these unique challenges particularly well, and he didn’t disappoint on Sunday.

Green Bay was ready to go. The offensive game plan that all teams have months to work up for the first game of the season was top notch. It was loaded with unexpected and innovative play calls. For example, in just four well-timed end-around calls, receivers Tyler Ervin and Allen Lazard produced 57 yards.

The Vikings gave lots of playing time to three cornerbacks who are age 23 or under: Holton Hill and Mike Hughes are 23, and Cameron Dantzler is 22. Aaron Rodgers targeted the hell out of the youngsters, which negated the Vikes’ strength at safety. 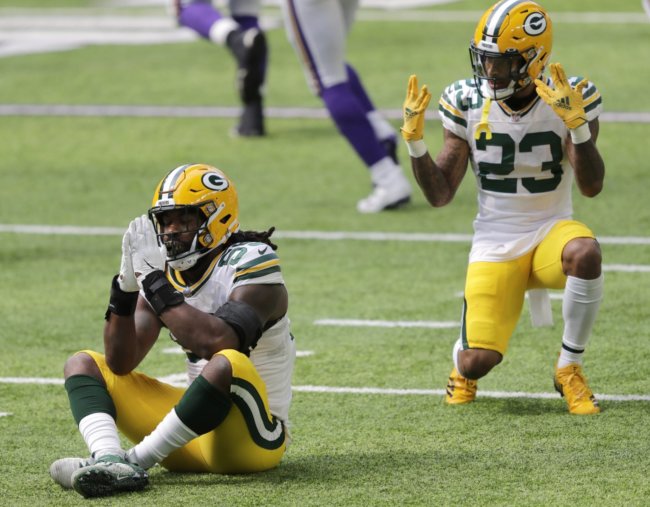 The final score didn’t accurately reflect how dominant the Packers were in this game. Green Bay wound up running 76 offensive plays, versus the Vikes’ 49. The Pack racked up 522 yards gained, while allowing 382. The Pack’s third down efficiency of 6 for 11 wasn’t bad for the first time out – and against what had been one of the league’s top defenses for the past several years.

The last time the two teams played, on December 23 and also in Minnesota, the Pack outgained Mike Zimmer’s crew, 383 to 139 yards, and the time of possession gap was over 15 minutes. On Sunday the possession times were 41:16 to 18:44, a huge disparity of over 22 minutes. Green Bay has been controlling and dominating its rival since LaFleur came to town. The fourth LaFleur-Zimmer butt-whuppin is scheduled for November 1 – by which time there had better be fans on the Lambeau Field benches.

Player preparation was excellent. The Packers had six penalties and no turnovers, with the only other obvious flaws being some drops by Marquez Valdes-Scantling and, yes, even by Davante Adams. There were few assignment mixups, communication errors, or poor play calls. Considering the nearly no-heavy-contact training camp, the tackling was pretty crisp.

Clock management was well done, with the jarring exceptions that with big leads the Pack’s defense three times allowed very quick scoring drives. It appeared they went into a prevent-big-plays mode, but this achieved the very opposite result. Defensive coordinator Mike Pettine has lots of work to do, but he seems to have better personnel to work with this season – it’s mostly a young returning group with another year of experience under their belts.

With each succeeding game, LaFleur is providing more evidence of how gifted, and even precocious, he is. Aided by his example, this team is unified, goal-oriented, and playing with ever-rising confidence. Players even seem to be reflecting LaFleur’s style of calmness, control, and calculation. This isn’t a coach who runs up and down the sidelines ranting and raving at every dubious referee call. LaFleur is so cool he could be doing deodorant commercials. That green on white-over-green windbreaker he wore almost made him look like a marching band leader.

It became apparent to me last year that LaFleur was unable to install much of the offense he had in mind in just one season. To gain over 500 yards on Sunday, against a defense that features two-each all-star caliber safeties, linebackers, and defensive linemen suggests that we’re going to see a much more explosive and creative Packers offense during LaFleur’s second campaign.

Despite injuries to offensive linemen Billy Turner (who was inactive), Lane Taylor, and Lucas Patrick, the team was prepared – they’d been shifting their O-linemen around all preseason. Elgton Jenkins, likely to be named an All-pro this year, was moved to right tackle, new acquisition Rick Wagner got 46 offensive snaps, and rookie guard Jon Runyan stepped right in and looked NFL-ready in his 15 snaps.

No matter who the blockers were, Aaron Rodgers had excellent protection all game long. The stats indicate he suffered only two QB hits and no sacks – I’m having difficulty finding out when was the last time that happened. That protection led the way to Aaron’s very fine 127.5 passer rating.

Throw in the solid debut of ILB Kirksey (all 52 defensive snaps, 12 tackles), and all the times MVS and Allen Lazard got wide open, and this team was humming. Pending Monday night’s two games, Green Bay’s 43 points was the league’s highest scoring output coming out of the shortened preseason.

The coaching staff saved one big surprise for us fans. Who was going to be the other inside linebacker, beside Christian Kirksey, in the base defense? Some figured it to be third-year man Oren Burks, though most felt Chandon Sullivan would get the call. Instead, the defensive coaching cabal started 22-year-old Krys Barnes. Barnes, a lightweight at 229 pounds, was an undrafted free agent, after being a three-year starter during his four little-heralded years at UCLA.

The Packers appear to have hidden Barnes from the rest of the league, as there was next to no buzz on him throughout training camp, and he was cut a week before the home opener. After being signed up to the practice squad, he was only added to the active roster one day before the Vikings game. Barnes proceeded to start the game on Sunday. In limited playing time (15 snaps), he responded with seven tackles, five solo and two for lost yardage! That’s some debut for the stealth ILB!

It was also encouraging to see other rookies getting playing time. A.J. Dillon was in for five snaps, gaining 14 yards in two carries. TE Josiah Deguara, in his 24 snaps, showed considerable blocking talent, and he had one 12-yard catch out of two targets. Jonathan Garvin also got six snaps at outside linebacker.

Matt LaFleur is 40 years old, and still getting his feet wet as a head coach. Mike Zimmer, the disagreeable 64-year-old Vikings boss man, has a nice regular-season record of 57-38-1 in his six years of head coaching; however, he’s only 2-3 in the postseason. His best days appear to be behind him.

Despite this, last year in late July he signed a three-year contract extension through 2023 – by which time he’ll be 68. The two head coaches in this intense NFC Central rivalry are headed in opposite directions. My guess is that Zimmer will be relieved of duties before his new deal runs out.

Did anyone see whether Zimmer sportingly shook LaFleur’s hand (or elbow bumped) after the game? All I saw was Matt trotting out and shaking hands with Viking players, while Zimmer reluctantly slow-walked his way onto the field.

A final thought on how great Week 1 has been for the Packers. Sporting News forecasted seven NFC teams, besides Green Bay, to have winning records in 2020. Of those seven, five already have incurred a loss: the Vikes, the Niners, the Cowboys, the Buccaneers, and the Eagles. I’ll be told that’s it’s too early, but the NFC top tier already appears to be Green Bay, Seattle and the L.A. Rams.

All this, and Rodgers, with Davante’s huge assist, put on a show in Week 1 that hearkened back to his last great year, 2014. If you’re a Packers fan who’s still not feeling optimistic, it might be time to see a therapist. This was a big and dominating win: celebrate!