Obviously, this does not apply to all fans or all white people. However, in light of recent events, it is difficult not to notice the flurry of social media posts from white folks expressing sadness and anger over destroyed property — these are mostly the same people that have remained silent over the decades as lives have been shattered by the law enforcement community of this country. The recent protests reflect not only the anger over the murder of George Floyd in broad daylight, but the centuries of racism in a country that touts itself on the international stage as the “Land of the Free”. Bullshit.

For years, peaceful protests against police brutality and racism in America have been mocked and ridiculed. Nothing changed as a result. The most notable peaceful organizer in American history, Martin Luther King Jr., was assassinated by one of the very racists he peacefully protested against.

While some are unabashed racists, the issue really is not with most of the police officers themselves, it’s their unions and the overall police culture in this country that runs on a cowboy cop mentality. A “good cop” can not stand up for themselves and speak out against “bad cops” because, if they do, their chances of rank promotion will disappear immediately — assuming they even keep their job.

Meanwhile, instead of utilizing proven de-escalation techniques, many departments are further antagonizing protesters and attacking members of the media:

This just happened on live tv. Wow, what a douche bag. pic.twitter.com/dQKheEcCvb

There are frequent reports that a lot of the destruction around the protests are from outside influences that are using the events for their own gain — and in some cases, to stir up dissent against the protests themselves. Even when you do consider that there certainly are protesters that were violent: does this change the fact that black Americans live like second class citizens? Are you really more worried about buildings and consumer bullshit than fellow human beings’ well being?

Let’s be clear: property can be restored and rebuilt. Lives taken by the militant police in the United States can not. Let us mourn for our fallen brothers and sisters that have fallen victim to police brutality the way some of us mourn the injury of our favorite players and the destruction of some brick and mortar.

Now, more than ever, is a time for our country to embrace empathy for one another and for non-black folks to put ourselves in the shoes of those that struggle on a daily basis in a country that still does not take them seriously unless they are entertaining white people.

For those calling for law & order: when they have their justice, only then will you have your peace. 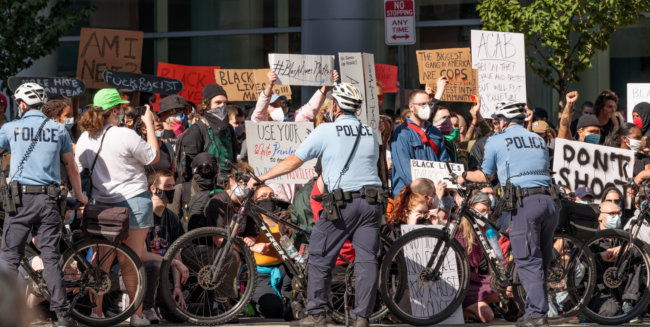 Previous Article
Packers Should Make Room in the Backfield for A.J. Dillon
Next Article
A New Era in the National Football League