Post-Draft, Looking on the Bright Side – Part 5

The two constants in the last half-dozen years of Super Bowl games are Tom Brady and Bill Belichick – but that partnership is now kaput. The Pats made four SB appearances in the past six years, including three victories in a span of five years.

Take away the Pats, and since the 2014 season there have been eight teams that have made it to the final game – once each. Due to the salary cap structure and the way draft picks are allotted, few NFL dynasties have all but been replaced in recent years.

We now have parity – and Packer fans, who’ve gotten spoiled, would be well advised to get used to this pro football fact of life.

If you don’t have Tom Brady on your roster, what other strategies can you employ to get to the championship game?

In 2014, the Seahawks had major talent on offense. Marshawn Lynch accounted for 1,673 yards and 17 touchdowns on the season. He rushed 280 times, for 1,306 yards, and a 4.7 yards per carry average. Russell Wilson was part of the supporting cast that year; his 3,475 passing yards ranked only 15th during the regular season. The team’s signature was its smashmouth run game.

In 2015, the victorious Broncos compiled a 15-4 record without a standout offensive star. As the season wore on, Brock Osweiler replaced aging and ailing Peyton Manning at QB. Manning was chosen to be the Super Bowl starter, though his efforts were anemic: 13 of 23 for 141 yards and no TDs – and a terrible passer rating of 56.6.

Running back C.J. Anderson is the closest the Broncs came to having an offensive star in the big game: his line was 23 carries for 90 yards (3.9 ave.) and one TD, along with 4 catches for a measly 10 yards. Denver accumulated only 194 yards of offense; the Panthers, meanwhile, racked up 315. The Broncos won despite possessing a listless offense. Over the regular season, the Denver offense averaged 355.4 yards, 16th best in the league. Defense ruled in 2015.

In 2016, the Falcons put together a unit that matched Belichick’s team score for score for four quarters. This was Matt Ryan’s year in the spotlight, and he had the incomparable Julio Jones as his primary receiver. Ryan was the league’s Offensive Player of the Year and MVP. The third overall pick in 2008 put it all together for one magical year. Alas, Tom Brady won the head-to-head battle between two superb quarterbacks.

In 2017, both youth and experience were served. Carson Wentz, the second overall draft pick a year earlier, went 11-2 in the regular season, leading a pretty undistinguished team into the playoffs. But Wentz finished the year on the sidelines with a back injury – allowing veteran QB Nick Foles his moment of glory. Foles and the Eagles won all three of their playoff games, with Nick recording a 115.7 passer rating in the playoffs.

In 2018, it was the Rams’ turn to challenge the mighty Patriots. Young head coach Sean McVay’s balanced offensive attack led the team to a 13-3 record. For the second year in a row, an unproven QB – Jared Goff, the top overall pick three years earlier – made it to the Super Bowl.

Todd Gurley rushed for 1,251 yards in only 14 regular season games – but a knee injury hampered him in the postseason. Without Gurley being healthy, the Rams were only able to put three points on the scoreboard.

Last season, after two years of fluky hot seasons by middle-range quarterbacks, normalcy returned to the Super Bowl: the Chiefs’ pass attack, led by the great Patrick Mahomes (though his SB statistics were sub-par), was too much for the creative ground attack of Mike Shanahan’s 49ers.

For the most part in the last six years, it’s been star quarterbacks, and high-powered passing attacks, that have catapulted teams into the Super Bowl: Tom Brady, Russell Wilson, Peyton Manning, Cam Newton, Matt Ryan, and Patrick Mahomes. Though Carson Wentz and Jared Goff have yet to establish greatness, each has used one transcendent year to aid his team in reaching the championship game.

In the past couple years, however, we’ve seen the rise of the run game. It was running back Todd Gurley who propelled the Rams into the Super Bowl two years ago, and it was the ground attack of the 49ers that got them into the big game last year.

By wading through a bunch of team stats, one can get a better sense of how ascendant is the run game in the NFL. Let’s do it.

Based on the above, we can describe KC, NO, and NE as pass-reliant teams. BAL, SF, SEA, MIN, BUF, and HOU were run-reliant. The one and only “balanced” Top-10 team was the Packers, who ranked 15th in rushing and 17th in passing.

This methodology suggests that in 2019 there were twice as many run-reliant teams in the Top-10 as there were pass-reliant ones. Additionally, the top run team in the league, the Ravens, had the league’s best regular-season record. On the other hand, the Super Bowl champs had the most highly-ranked passing attack, but the lowest-ranked run attack, among the Top-10. 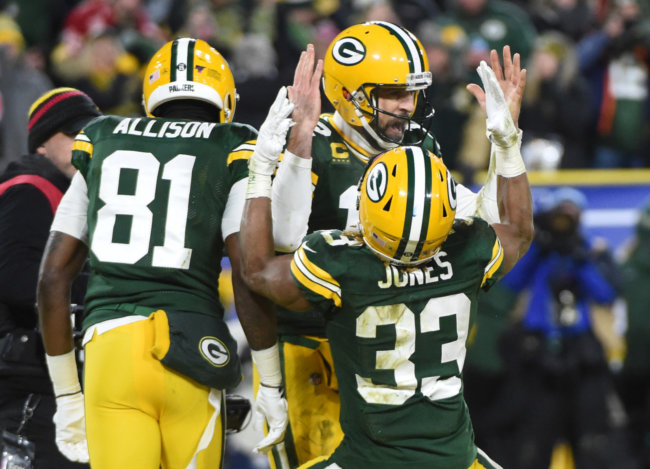 There’s a discernible trend in the NFL toward strong running teams compiling solid winning records – and going on to compete in the postseason. I’d add that the Packers will likely cross over to the list of run-heavy teams in 2020. That’s what Matt LaFleur repeatedly says is the type of offense he wants. It’s also what Brian Gutekunst’s recent draft choices suggest, with the exception of Jordan Love.

Here’s the bright side: in terms of offensive philosophy, Green Bay seems to be on the right track with the offensive direction it claims to have chosen.

Previous Article
2022 NFL Draft Confirmed for Las Vegas
Next Article
What Do Packers Have in Jordan Love & When Might They Move on From Aaron Rodgers?