From 1992 through last season, the Packers have had but two regular starting quarterbacks: Brett Favre and Aaron Rodgers. That’s right, for 28 years (and counting) we’ve had a combination of excellence and continuity at the key position in football. I assume such a run is unique in league history.

I probably left a few out, but that’s still 19 guys, and the only ones who gave us any longevity were Jermichael Finley (2008-2013) and Richard Rodgers (2014-17). Can we all agree that the Packers have failed at acquiring and keeping a quality tight end for over a decade now?

Just think, the Cowboys got themselves Jason Witten in 2003, and he gave them 16 stable and stellar years from then through 2019 (other than his brief retirement in 2018). Other than for Finley – who came with plenty of baggage – neither Brett nor Aaron have had prolonged passing success with a tight end since Mark Chmura was here from 1992-99. This includes when Bubba Franks was the starting tight end from 2000-07 – he averaged a mere 32 catches and 288 receiving yards per season.

In contrast, the two QBs did, however, share time for 14 years with a wide receiver who was far from the most talented of players, but whose consistency and synergy (thanks Mitch) with his QBs bore great dividends: Donald Driver.

My point is that there is great value in having a roster featuring skills players who return year after year. Such players become intimate with the team’s plays, teammates, and overall system and culture – making everyone’s jobs easier. Such familiarity is especially favorable when it comes to quarterbacks and receivers.

But I digress from the topic of tight ends. Wouldn’t it have made good sense, at some point, for the Packers to have expended a relatively high draft choice, or made a trade, to get a young tight end who likely would spend much of his career with the Packers?

In 2016, Thompson decided to change tactics. He signed up an established 7-year veteran, Jared Cook. His mistake was securing him for only one year, at a low price of $2.75 million. It was an open invitation to Jared to go elsewhere if he were to have a good year – he did, and he quickly flew the coop. Jared has had some fine seasons with Oakland and New Orleans since leaving Green Bay.

Thompson followed up in 2017 by signing up a more established veteran, Martellus Bennett, this time for three years and $21M. Suffice it to say he picked the wrong guy – and someone known to be a disruptive force.

Thompson’s successor, GM Brian Gutekunst, then upped the ante, getting 8-year veteran Jimmy Graham – a future Hall of Famer – for $30 million for three years. As I recall, this made him the highest paid tight end in the league. Graham proved to be injury-prone, and he was rapidly slowing down. Graham hauled in only 93 passes for 1,083 yards in his two years here – he was known to do better than that in a single season with the Saints. In 2020 he’ll try to rebound with his fourth team, the Bears, who are paying him $16M for two years. Several pundits have panned the Bears for this contract. 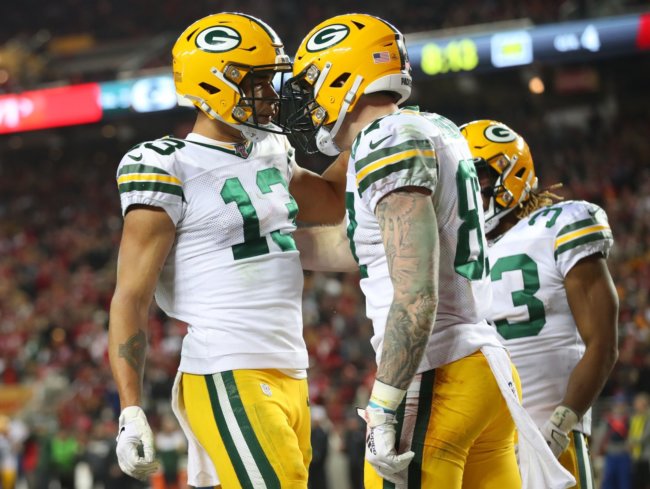 As the 2020 draft approaches, the Packers have four tight ends on the roster: veteran Marcedes Lewis, and the inexperienced Robert Tonyan, Evan Baylis, and Jace Sternberger. Many fans think the Packers should go after a tight end in the first two or three rounds.

I’m not among them. I believe that Jace Sternberger is the tight end the Packers have been looking for over the last couple of decades.

Jace played one year of college ball for Texas A&M, after previously wasting his time at Northeastern Oklahoma A&M and Kansas. Last year Gutekunst chose Sternberger in the third round, the 75th overall pick – a considerable investment.

Though almost all of his college promise comes from his only year at A&M, that year was a doozy. Here’s a lengthy quote from Wikipedia on honors he received while there:

During the 2018 season, Sternberger received midseason All-America honors from CBS Sports, the Associated Press, Sports Illustrated, Athlon Sports and ESPN. He was named one of eight semi-finalists for the John Mackey Award, given to the nation’s top collegiate tight end. He was not selected as a finalist for the award, even though he had more touchdowns, receiving yards, and yards per reception than each of the three finalists. Despite not being selected as a Mackey Award finalist, Sternberger received first team all-SEC honors and first team All-America honors from the Associated Press, Athlon Sports, CBS Sports, Football Writers Association of America, and Sporting News, Sports Illustrated, and the Walter Camp Football Foundation. He earned second-team All-American honors from USA Today. Since Sternberger was recognized by at least two of the five NCAA-recognized All-America team selectors (AP, AFCA, FWAA, TSN, and the WCFF), he became a consensus All-American.

Did you know what constitutes a “consensus” All-American? I didn’t. Did you realize the Pack drafted a tight end with such strong credentials last year? He probably fell to Round 3 because of having only one notable collegiate season, but I’m very pleased he did. I have high hopes that Sternberger will prove to be a draft steal. Given Sternberger’s potential, you sure don’t want to use up another draft choice one year later on another TE.

In his sole year at A&M, Jace had 48 catches for 832 yards (17.3 average) and 10 TDs. Jace then fave up his final year of college eligibility and declared for the 2019 draft. His NFL Combine scores were middle of the road, though his 40-yard dash time of 4.75 seconds was acceptable at 57th percentile. 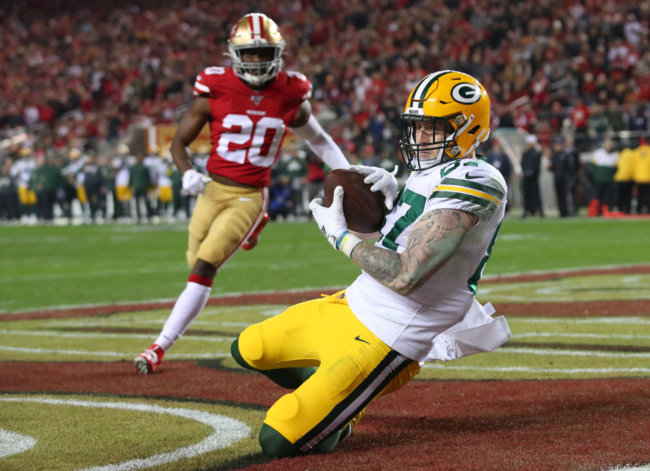 If Packer fans don’t know much about Jace Sternberger (not to be confused with Jake Stoneburner), it’s probably because he started the 2019 season on injured reserve. He badly hurt his ankle in the preseason finale, though he also scored a touchdown in that game. You might also recall that he missed three weeks of training camp after he suffered a concussion and jaw injury during the team’s joint practices with the Texans – the result of a cheap shot by a rookie Texan cornerback.

He wasn’t activated until November 2, he only started one regular season game, and he dropped the only pass he was thrown. Performance-wise, it was a lost year, though he now knows the team’s play book and has a feel for what it takes to compete in the league.

The good news is that the people who count the most are apparently sold on Jace. One reason for thinking so is because he was given the start in the playoff game versus the 49ers – in which he caught his first pro pass, for an 8-yard touchdown, temporarily closing the gap to 34-20 with eight minutes to go.

A better reason is that people in the best position to apprize the 23-year-old despite his thin resume are bonkers over him.

Matt LaFleur got animated when talking about Jace in early March:

“Here’s what I love about Jace Sternberger: I know the game’s not too big for him. He loves to compete, and he’s so versatile. Whether it’s inline, or it’s moving into an H-back, fullback-type position. The guy has contact courage. He’s not afraid to put his face on people. He’s a much better blocker than anyone ever thought he was coming out of Texas A&M. I’m just excited for his future.”

The head coach went on to cite his competitiveness, surprising effectiveness as a blocker, and potential as a downfield receiver as reasons for his optimism.

So, we might see Sternberger playing some fullback? That’s thinking out of the box that Packer fans have seldom seen. I won’t hold my breath on this one. Fans got all excited the last two years over a fullback, Danny Vitale, who was doing well at everything asked of him. Then the team stopped asking, and he’s now the property of the Patriots.

GM Brian Gutekunst chimed in with a similar perspective:

It’s high time the Packers stop the revolving door of tight ends. Green Bay needs to commit to a player who they so strongly believe in – which means putting him on the field and regularly getting him the ball. I’m hopeful that Sternberger will be the Pack’s starting tight end to start the season. Even if he’s slow to come around (think Davante Adams, who took two full years) Jace should be given ample playing time and experience in 2020.

If the Packers make Jace a prime component of the passing game this season, I’ll go out on a limb: I predict he’ll approach or exceed Finley’s best annual receiving yardage of 767 in 2011.

A cautionary note: commitment by the GM and head coach isn’t enough. QB Rodgers must also embrace the plan.

The team’s tight end annual receiving record, a modest 814 yards, set by Paul Coffman in 1983, might also be within reach. Nowadays, 1,000-yard seasons by tights ends are even quite frequent. In 2019, for instance, the Chiefs’ Travis Kelce went for 1,229, the Raiders’ Darren Waller had 1,145, and the Niners’ George Kittle had 1,053. Waller, a sixth rounder in 2015, had 18 catches in three years before being thrown to 117 times by Derek Carr, and catching 90 of them, last season. If Carr and Waller can bust out like this, so can Aaron and Jace.

Should Sternberger get injured or fail to perform well, the Packers have adequate backups in Lewis, Tonyan, and Baylis. Securing the services of Marcedes Lewis for another year was a wise move – though he’ll be 36 in May, he remains a fine blocker and a super-reliable professional.

There’s no need to draft a tight end later this month – my advice is for Green Bay to put full faith in Jace.