My appraisal of the Pack’s prospects for 2020 is that the roster is shaping up to be inferior to that of the previous year. Some of the newly acquired players look like a step down in quality. I hope I’m wrong, and maybe I am. Otherwise, though, let’s hope that three or four guys are in store for that coveted “breakout” year.

If three or four of over a half dozen candidates manage to exceed current expectations, I think we’re back in the postseason business. In coming days I’ll be looking at some of the guys who could be welcome surprises – and propel head coach Matt LaFleur to going two for two in getting Green Bay into the playoffs. That’s a sufficient goal at this stage.

Could wide receiver Reggie Begelton be one of the guys who’ll give this team a giant, and presumably unexpected, boost? Of all the players on the roster, he’s got to be the most unknown quantity. He also comes with an underdog story the likes of which the NFL seldom sees.

Begelton hails from Beaumont, Texas, a city of 117,000 (2010 census) near to the Gulf Coast and the Louisiana border. He probably wouldn’t have even played college ball, except that Lamar University, after disbanding its football program in 1989, decided to re-instate the program in 2010. 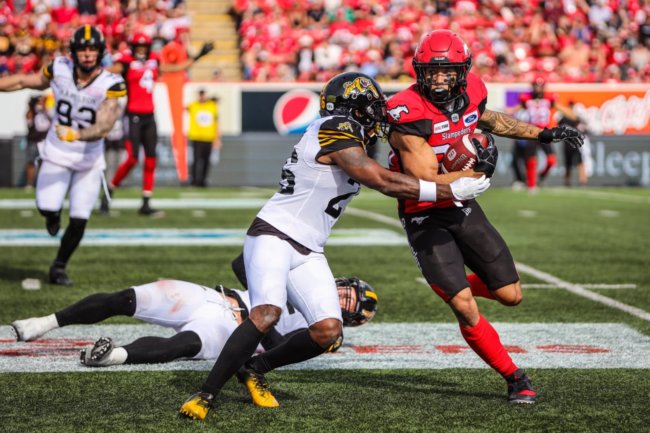 Sep 14, 2019; Calgary, Alberta, CAN; Hamilton Tiger-Cats defensive back Cariel Brooks (26) tackles Calgary Stampeders wide receiver Reggie Begelton (84) as he runs with the ball in the second half during a Canadian Football League game at McMahon Stadium. Sergei Belski-USA TODAY Sports

Reggie, a native of Beaumont, finished his little-noticed high school career and graduated in 2011. He didn’t get any substantial scholarship offers, so he decided to become a walk-on at his home-town college. As Reggie tells it:

“I came here to get a degree in chemical engineering, as this school is very good for engineering. I played football just to play it. . .I was a walk-on for two years, and at that point my dad was paying out of pocket for me to go here because I couldn’t get financial aid. I had to make a choice whether to quit football or at least ask the coach for a partial scholarship — if I couldn’t get that I was going to have to quit football or a few classes. [My former head coach and wide receivers’ coach] saw something in me and gave me a half scholarship. I can easily say after that I took off. That was a blessing all in itself, because I wouldn’t be here today without that half scholarship. I graduated in fall 2015 with a bachelor’s degree in business.”

Playing for the Division 1 (FCS) Lamar Cardinals, Reggie finished his collegiate days with decent, but not eye-popping, stats: 227 receptions for 2,435 yards and 20 touchdowns. He went undrafted by the NFL in 2016.

He didn’t get invited to the NFL Combine, though he did attend a Pro Day event at his school. I haven’t been able to get those scores and times, other than seeing one reference to his vertical jump being almost 40 inches. One source says three NFL teams showed up for that Pro Day, while another says five did – including the Green Bay Packers.

At any rate, little interest was registered at the time, and Begelton’s football days appeared to have ended. He took a job in his home town at Universal Coin and Bullion. Reggie credits that short-term job with re-kindling his efforts to play professional football:

“The people in that company were one of the biggest influences on me to move forward in my future with football,” he said. “They taught me how to battle adversity mentally and, honestly, it was the stepping stone I needed to get out of my comfort zone.”

After his brief retirement from the game at age 22, Reggie looked north – a long way north from Beaumont. In May of 2017 he signed on with the Calgary Stampeders in the Canadian Football League.

After barely making the squad in his first season, he broke his arm in the seventh game of this second year – but in those seven games he was productive: 25 catches for 488 yards with one touchdown. The Stampeders went on that year to beat the Ottawa Redblacks to win the CFL’s 106th Grey Cup. I guess that makes the CFL older than the NFL.

In 2019, it all came together for Reggie. He recorded 102 catches, for 1,444 yards and 10 touchdowns. He finished second in the league in receptions and third in receiving yardage, and he was the unanimous selection as the team’s Most Outstanding Player.

Following the end of the CFL’s season in early November, the NFL came calling. Begelton had tryouts with the Vikings, Colts, Bengals, Giants, Cardinals, and Saints. In New Orleans, he was surprised to find himself working out alongside a better-known receiver: Antonio Brown. That experience was an eyeful for him:

“He’s a beast. Coming off the line, it’s like he’s shooting out of a cannon. That humbled me right there because he’s a different kind of fast. I actually got to see what elite looks like in person. It makes me motivated to work and to get to that level.”

After the workout ended, Begelton sent a brief tweet of encouragement to Brown and was surprised when Brown tweeted back: “Great workout fam you was snapping down nice coming back to the ball with the js on! Respect.”

Then, on New Year’s Eve, two days after the Pack finished its regular season at 13-3, Reggie had a tryout with the Packers. He didn’t have to wait long for a follow-up. The Packers signed him to a reserve/future contract on January 6. In the midst of preparing for the playoffs, GM Brian Gutekunst inked him to a three-year deal, for $2.292 million – that’s undoubtedly a step up from what he was making at the coin and bullion place (whatever bullion is).

The Packers list the 26-year-old Begelton at 6’ and 200 pounds, though Wikipedia has him at 6’2” and 205. That puts him close in size to Davante Adams, though on film Reggie seems a bit taller, lankier, and with a more muscled upper body. It’s easy to find his lengthy CFL highlight reels online – one runs five and a half minutes and another is more than twice as long.

He’s got great hands and an agile body, and some subtle moves which enable him to get lots of yards after the catch. His speed appears to be average at best. He does a lot of his damage across the middle, usually 15 yards or so downfield – he might make a suitable slot receiver. In 2019, two quarterbacks split the duties for Calgary, with each having no trouble hooking up with him. He’s athletic, smart, energetic, and doesn’t shy away from contact.

Stampeders’ longtime receivers coach Pete Costanza had this to say:

“In Reggie’s first year he showed a whole bunch of flashes in training camp, We all knew then that he had the ability to become a playmaker. . .The more he played, the more his confidence continued to grow. We always knew he had the athletic ability. It was more about getting him that chance. . .The one thing that you notice about Reggie when he plays the game, he’s definitely not afraid to catch the ball in traffic. He’s got very good hand-eye coordination. The one thing I thought his game really improved on this past season was his ability to catch the ball, understand the situation and help us move the chains.”

Reggie knows playing in the NFL will be challenging, but he also realizes he’s got a rare opportunity for fame and fortune.

“Moving forward, I know it’s not going to be easy even though I’m doing all the right things. Not everybody’s path is the same. Just because I didn’t get my opportunity at the age of 21 like other big college people, doesn’t mean that’s my path.”

If you compare receiving yardages from last year, Reggie’s 1,444 stands out – and even exceeds anything Adams has ever done. How about this: I have Reggie’s above eight rivals gaining 1,195 yards through the air last season – combined. Okay, CFL teams play eighteen regular season games, but still! Yeah, the Pack is currently a wee bit thin at wide receiver.

Whether you think Reggie is up to the task likely depends on how you rate the quality of CFL football. I’m unable to assess that, though it does seem that CFL players rarely make it onto NFL rosters. While many readers are likely to be dismissive of Reggie’s chances, Gutekunst doesn’t appear to be among that group – otherwise why would he have locked up Reggie’s services through 2023?