To the extent one can render an educated guess as to whom an NFL Club is likely to draft, picking the round 1 choice is usually the easiest. This year, however, I’d say that all bets are off. There isn’t even any consensus on what position the Packers will choose when their chance, at selection number 30, comes up.

Often, you can get a clue to what a team is thinking by looking at which college prospects a team has interviewed, conducted a workout with, or otherwise met or spoken with. But even that doesn’t help much in this year of the virus. While the NFL Combine was successfully held, from February 24 through March 1, teams who didn’t schedule interviews by then probably have had a phone interview as their only option.

Still, most teams have by now managed to have some sort of “visit” with the players they are eyeing. One source that tracks such visits is walterfootball.com. At this writing, they’ve compiled a list of 43 players who the Packers have at least spoken with. Some meet-ups were at the Senior Bowl, the East-West Shrine game, the NFL Combine, a Pro Day event, private workouts or tryouts, or telephonically.

According to Walter Football’s list, here’s the breakdown, by position of players who have met with Green Bay: CBs, 11; LBs, 6; WRs, 5, Safeties, 4; RBs, QBs, DEs, and DTs, 3; OTs and TEs, 2; and Guards, 1. This of course gives us no clue as to what round the Packers think they might be drafted in. In fact, each year the Packers interview many players who they think will go undrafted – so they can pounce on them right after the draft concludes.

The visit list breaks down into 27 defensive guys and 16 offensive ones. One of the things that can be gleaned from the above info is that the Packers, like everyone else, are always on the lookout for defensive backs. The list suggests that Gutekunst and Co. don’t think they have great depth at any defensive position. The Packers appear to believe they are in good shape on the offensive line, and in pretty fair shape at running back and tight end.

The three quarterbacks who made the list are: Jordan Love (Utah State), Tommy Stevens (Mississippi State), and Kevin Davidson (Princeton). Davidson is projected as a seventh round choice, and Stevens as going undrafted. Love will probably be gone by pick #30. 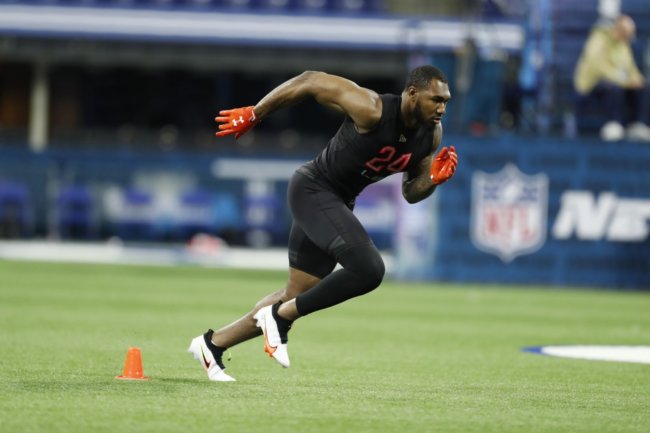 Very few of these 43 players are viewed by experts as being first round prospects. Those few seem to me to be:

This list is all over the map: three on offense and three on defense. Predicting what GM Gutekunst will do is a real crapshoot this year.

The Packers would not bother interviewing such prime prospects unless they had some serious interest in them. It’s likely that two or three of them will have already been chosen by the time Green Bay gets to choose at #30, with the most likely ones being Jordan Love and Patrick Queen.

My sense about QB Love is the Packers interest is based on their thought that he’s a top-20 draftee, but he’d be an intriguing value in the event he’s still available at #30. I just don’t see the Packers in dire need of a quarterback, tackle, or cornerback. That leads me to believe the Packers are most focused on using that first choice on a linebacker or receiver.

Bear in mind that this is anything but a comprehensive list of the Packers best prospects. It is merely a look at positions, and a few individuals, that the team has shown enough interest in to have met with in some fashion.

Place your bets fans – and enjoy a very uncertain, but critical, few days in front of the telly.