The Dilemma that Jonathan Taylor Poses

It’s hours from the start of the draft, and I’m panicking.

I’ve noted the groundswell of support for Jonathan Taylor, who so many Wisconsin residents and Badger fans would like to see wearing the green and gold. Several mock drafts indicate Taylor will still be available when Green Bay goes on the clock at #30.

I’ve finally viewed the highlight reels. They are sur-reel. I’m getting tugged every which way.

I value a guy who’s been a dominant college player, and JT fits the description. Taylor is the kind of athletic freak who gets me woozy – such a stud comes along just once or twice in a decade.

On the other hand, I love Aaron Jones, and I can’t say that a running back is a pressing need.

Then again, Matt LaFleur has indicated that his entire offensive philosophy centers around a strong ground game – and picking Taylor would leave us set in that department for the next five years – and we also wouldn’t be faced with paying Jones $10M or more if we want to retain him after this season.

On the downside, though, taking Taylor would mean not using the club’s top pick to fill one of the roster holes that we need to address, such as WR, LB, or OT.

But none of these considerations has been what sways me.

Remember, I’m the guy who advised that the Packers should have those two massacres at the hands of the 49ers season strongly in mind at draft time. Well, guess who gets to pick right after the Packers? The Niners.

You think that run-scheming genius Kyle Shanahan has a fearsome ground game now? You think NFL Executive of the Year John Lynch can’t see what Taylor has to offer? Imagine what happens if the Niners get their mitts on Jonathan Taylor.

At the moment, Shanahan has three running backs who the Packers are no match for. But it’s Shanahan’s schemes, not the talents of his current RBs, which gets these guys into open spaces. The RBs he has now were just trying to hang onto an NFL roster when Shanahan found them and inserted them into his lineup. You put Taylor into the SF backfield, and it’s lights out for the rest of the league.

It’s a real likelihood if SF will pick Taylor if the Packers pass on him. Bear in mind that the Niners’ roster is already stacked. They’ve got the best group of pass rushers, best tight end, maybe the best O-line, Pro Football Focus’s highest-rated cornerback, and so on. They could select Taylor, and then trade away (for good value) two of their three current RBs.

And if the Niners let him get by, the nightmare still doesn’t end. The opportunity would then pass to the current Super Bowl champs – whose only glaring roster weakness appears to be at running back, where Damien Williams, who went undrafted in 2014, and gained fewer than 500 yards last year, is the starter.

I’ve made up my mind: if Taylor is around when the Packers come up late in Round 1, I’m fine with the Packers choosing him. I can’t bear the thought of allowing a guy like this to be added to the 49ers arsenal – or for that matter to the Chiefs. 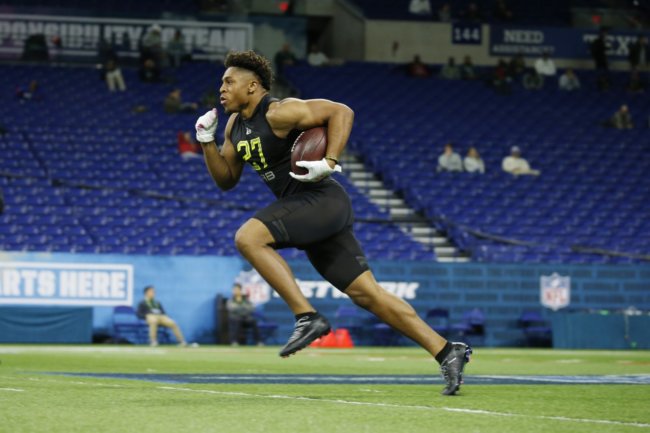