Picking the Best Draft Choices: Even an Amateur Can Do It

As the 2019 NFL draft approached, the Packers were sitting pretty, with draft picks 12, 21, 44, and 75 in the first three rounds. It was a good thing, as the Packers had some serious holes to fill in the roster. Foremost in my mind was the need to obtain a high-quality wide receiver.

I’m not a big fan of the college game, but last spring I decided to try my hand at picking which wide receiver the Packers should draft.

I didn’t obsess over every one of hundreds of college receivers. First I reviewed what several experts were saying: I went with WalterFootball, NBC Sports, CBS Sports, Drafttek.com, Bleacher Report, Sporting News.com, and Pro Football Focus.

Based solely on what those sources were saying about available receivers, I came up with a list of nine possibilities:

I then compiled lists of the players’ sizes, ages, and the college conferences they played in. I also explored their 40-yard dash times and other NFL Combine marks; their collegiate honors, and their body of college work (number of seasons, catches, yardages, catch averages, touchdowns).

I then quickly winnowed the candidate list down. I simply would not use a high draft pick on a receiver as small as Andy Isabella or Marquise Brown. I found the majority of these players to have college resumes that were surprisingly thin – but that was because most of them entered the draft so early.

All this information and data is included in my post of 4/14/19: Will Brian Gutekunst Take a Chance, or Play Safe?

When it came time to choosing, I selected N’Keal Harry as my second-runner up. My first runner-up was A.J. Brown – who I also felt at the time would be the most ready for immediate stardom. My top choice, however, was Brown’s teammate at Ole Miss: D.K. Metcalf. I went on record with my choices 11 days prior to the 2019 draft. 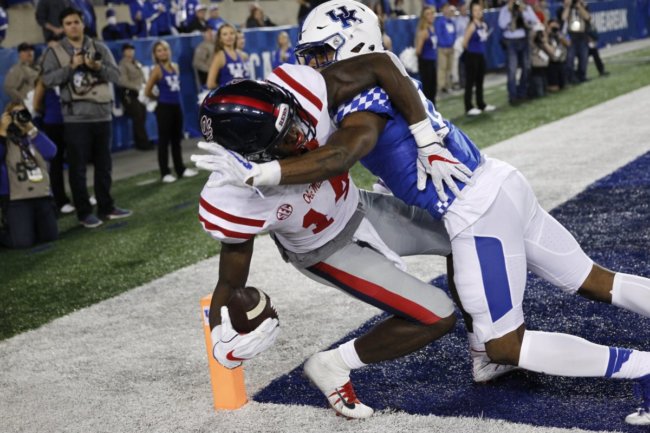 How Did They Do?

Here’s the sequence in which these guys were eventually drafted (overall picks), and by whom:

Here are how the above nine players actually fared in their rookie pro regular seasons, listed in order of their total receiving yardage:

Hakeem Butler – suffered a broken hand, and was placed on injured reserve August 25, causing him to miss the entire season

How Did the Robster Do?

My pick, super-athlete D.K. Metcalf, ranked second overall among all NFL rookies with 900 yards of regular-season receptions; this constituted the 34th best receiving yardage in the league. Counting the postseason, however, his stats were: 69 catches, 1,119 yards, 16.2 average, and 8 touchdowns – best among all rookie receivers. Metcalf just kept getting better in postseason play, though in a playoff loss to the Packers, he was held to 4 of 5 catches for 59 yards.

My second runner-up, N’keal Harry, was sidelined due to an injury for most of the season.

We can but wonder how the Packers would have finished had they used their 44th pick on Metcalf or Brown. Clearly, either ought to have started right away for the talent-starved Packers, and gotten 400 to 500 more than those who the Packers instead fielded behind Davante Adams.

There were of course a few players who performed beyond my expectations. It surprised me that speedster Marquise Brown was the first rookie receiver chosen, and even more that he was quite productive for the Ravens. Long term, we’ll see how long a 170-pounder (166 at the Combine) can hold up in a land of giants.

The biggest shock, however, was to see my man Metcalf go undrafted until the final pick of Round 2. That’s crazy.

Where I was way off target was in hazarding a guess that GM Gutekunst, aware that the team was in desperate need of quality receivers, would be drawn to Metcalf’s tremendous athleticism and potential and draft him. After both Metcalf and A.J. Brown were, incredibly, still available at draft pick #44, I was flummoxed to see Gutekunst pass on both of them.

Gutekunst then outdid himself even more, by failing to draft a receiver in any round. Many other general managers who had need of a good receiver were just as stupid – not ignorant, as Metcalf’s abilities were impossible to overlook, but flat-out stupid. Brian didn’t take a chance or play safe – he just played dumb.

All of my research and weighing of the most relevant factors took maybe six hours. Without the benefit of interviews, individual tryouts, or film study, I was able to pick out the top two rookie receivers of the draft class of 2019!

Can you blame me for thinking this scouting stuff isn’t as hard as it’s made out to be? Who was it that keeps saying: “Athleticism is important in athletic pursuits?” Oh, that would be me.

Previous Article
Dating Apps That Are Worth Paying Attention To
Next Article
Aaron Jones Deserves an Extension!