by Jason Parker
in News and Rumors
15

First of all, I miss all you folks. Sorry for the lack of communication, this site will never die. Do not worry.

It’s official: veteran TE Jimmy Graham, who was being paid top dollar by the Packers for mediocre performance, is released and will not be returning next season. I am Jack’s complete lack of surprise.

Packers are releasing TE Jimmy Graham on Thursday, per source. He will become an immediate free agent.

The last 2 years have certainly been interesting! A lot of memories, friendships and humbling moments that I will carry with me into the next opportunity. Thank you for the support during our exciting run this year toward that ever so elusive ring. ✌🏽 pic.twitter.com/7tQf7eQtzC

This frees up $8 million in salary cap for the Packers this season. Last season, Graham was the highest paid tight end in the league. He has not really done much since his days with the Saints to justify that pay so I do not imagine he will get close to that in free agency. 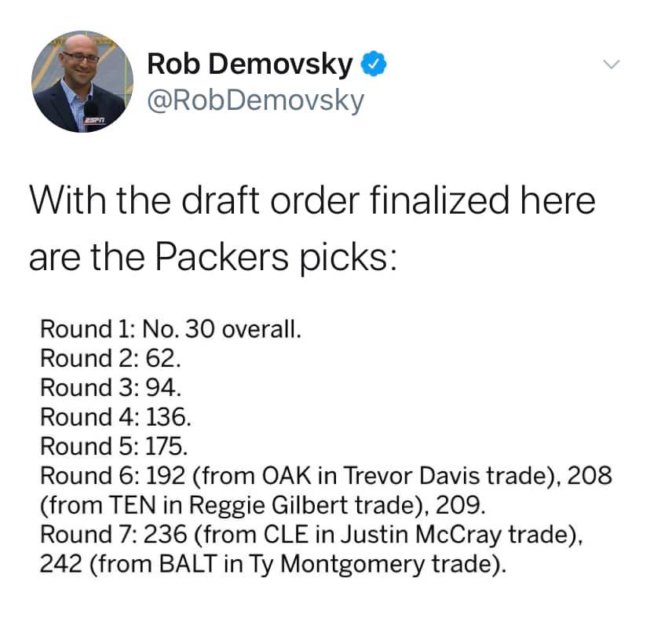 The 2020 NFL Draft begins on Thursday, April 23rd in Las Vegas(technically Paradise, NV). I was seriously considering going this year, but COVID-19 has put a damper on those plans. In fact, I wouldn’t be surprised if a lot of the public events around it are cancelled. Not saying they should or shouldn’t, just sharing my thoughts.

#Cowboys’ Byron Jones’ market *starts* at $16-$17 mil per season, according to teams I’ve spoken to. And that’s without factoring in whether it’s an Oklahoma land rush for him. Conservstive market on #Packers RT Bryan Bulaga is projecting to be $12 mil per. RTs about to get paid.

This further reduces the odds that he will get the type of deal he expects from the Packers on a new contract.

The Athletic quoted Bulaga earlier this month on his desire to return to the Packers(from an interview with ESPN Wisconsin):

I told this to Coach LaFleur in our exit interview, and I have no problem saying it. This was probably one of the more fun years I’ve had as a Packer.

It’s tough to think about. But obviously, I think anyone that knows me and knows my mindset about this, everyone knows that I would love to be back with the Green Bay Packers. I don’t think anyone questions that. It would be, to me, really cool to start and finish my career in the same spot.

I think that would be awesome. There’s no doubt about that. As I’ve told you guys many times, I grew up in Green Bay, essentially – having kids, getting married, a lot of ups and downs. A lot of great things happened in my 10 years in Green Bay and there’d be nothing better than to finish my career out as a Green Bay Packer.

But in the same light, you understand that this is a business, and I don’t know what’s going to happen going forward. I don’t know what the Packers’ plans are, and it’s one of those things that we’ll have to see. I’ve gotten a lot of (messages) from people on Twitter saying, ‘Just take a deal!’ Well, it’s not as simple as that, as you know. It’s just not as simple as that. So we’re going to have to see what happens and see what takes place in the coming months.

NBC Sports reported yesterday that the Milwaukee Journal indicated that the Packers haven’t really done much to reach out to him so do not be surprised.

Drafted in the third round of the 2014 NFL Draft by the Cleveland Browns, Kirksey was released by the team earlier this month.

Alex handwrote this clue just for you, @AaronRodgers12. pic.twitter.com/GBy2jxy0CP

You can watch the video of the full Football category here: