Notes: I’ve defined “momentous” as being most responsible for the success that was achieved by the team in the past season. I’ve grouped certain people or events where it seemed sensible. I’ve also taken the liberty of rating single-game heroics alongside season-long happenings, so the numerical rankings are highly subject to debate.

Despite the high price tags, edge rushers Za’Darius Smith and Preston Smith, strong safety Adrian Amos, and guard Billy Turner all proved to be great team additions. In particular, the two Smiths caused Green Bay to lead the league in pressures on the quarterback.

Jones established the following career bests: most rushing yards in a season (1,084): most receiving yards in a season (474); most games played (all 16); most carries (236); most rushing TDs; most receiving TDs; most receptions (49); highest average yards per catch (9.7); longest reception (67 yards); and most TD receptions (3). Pro Football Focus rated Jones second best running back in the National Football Conference, ahead even of Minnesota’s Dalvin Cook.

It’s impossible to say whether another head coach would have emerged with 13 wins with this group, but LaFleur certainly deserves a substantial amount of credit for the 13-win season. The Packers appeared to be well organized, arrived ready to play almost every week, and certainly found ways to win, even when they played sporadically on many occasions.

His play-action designs, play calls, and steady commitment to establishing a strong run game resulted in a rushing offense that by season’s end outshone the passing game. Under his overall supervision, the team’s defense and special teams each developed into strong units. LaFleur re-instilled a culture of winning and camaraderie.

LaFleur didn’t exploit the use of play action nearly as often or as effectively as did his fellow head coach, Kyle Shanahan. It took three years, however, for Shanahan to acquire the key offensive players he needed, and the practice time needed to fully implement play action in his first head-coaching job with the 49ers.

LaFleur has most of his key offensive players returning in 2020, so I would expect the Packers’ offense to take another step forward in Matt’s second season in Green Bay.

In what was arguably the biggest game for the team since the 2016 season, the Packers rolled into the Vikings’ stadium – where they had yet to win in three tries – and simply pummeled the home team. The Vikes were limited to 139 net yards of total offense, 57 on the ground and 82 in the air. QB Kirk Cousins was held to 16 completions in 31 throws, for 122 yards, 1 TD, 1 interception, and he was sacked five times for 40 yards of losses. His 58.8 passer rating was little more than half of his season average of 107.4.

This win – the fourth of five straight wins to conclude the regular season – made it possible for Green Bay to be seeded highly, get a bye week, and play at least one playoff game at home.

This comeback win secured the #2 seed in the NFC playoffs, gave the team a first round bye, and assured that the first playoff game would be played at Lambeau. Mason Crosby also provided the difference in the Week 6 game against the Lions with a field goal as time expired. This win turned the bye week, home field, and high seeding playoff possibilities into reality.

#7 Packers Offensive Line Was One of League’s Best

The offensive line was led by left tackle David Bakhtiari and right tackle Brian Bulaga, who were ranked by Pro Football Foccus as respectively the best and second best at their positions in the league. The others, center Corey Lindsey, and guards Billy Turner and Elgton Jenkins also played at a high level. In the past Green Bay’s O-line was renowned mostly for its pass blocking, but in 2019 they additionally demonstrated their ability to create great running lanes for Aaron Jones and Jamaal Williams.

After defeating the Lions the week before, the Packers stood 3-0 in their division, 5-1 on the year – and they were starting to believe they were a legitimate contender. The Raiders came to town, for the last game prior to the Packers playing the next four of five games on the road.

Out of nowhere came the sleeping giant. On the day, Aaron Rodgers completed 25 of 31 passes, for 439 yards, five touchdowns, and the maximum 158.3 passer rating. Five receivers caught passes for 40 yards or more, led by Marquez Valdes-Scantling with 3 for 133. The five TDs were distributed to five players, including running backs.

The game served as proof that when Rodgers’ game is on, this team is capable of beating anyone. It also served to show that the downturn in Rodgers’ game is not due to physical aging. For the 6-1 Packers, talk about making the playoffs was no longer considered premature. LaFleur’s guys became believers.

Going into the season, many of us realized the team was lacking in quality receivers other than Adams. After Davante suffered a turf toe injury late in the game with the Eagles, he entirely missed the next four games. Stepping into the breach was Allen Lazard, who hadn’t caught a pass in the NFL until Game 6. However, in Games 6 though 8 he proceeded to haul in 12 catches, in just 14 throws, for 149 yards and a touchdown.

In the final 11 games, the 6’5” 227-pound Lazard tallied 35 receptions for 477 yards and three touchdowns. Largely due to Lazard’s sudden rise, the Packers won all four games missed by Adams. Other than for Adams, Lazard has clearly become Rodgers’ go-to receiver. His blocking was also revealed to be excellent on several plays. Not bad for a guy who (inexplicably?) went undrafted in 2018 after establishing many school records at Iowa State.

When starting left guard Lane Taylor suffered a serious biceps injury in Week 2, and was placed on Injured Reserve on September 21, the Packers were fortunate to have chosen Jenkins 44th overall in the 2019 draft. Though it was foreseen than Jenkins would become the starting left guard in the course of the year, he played the rest of the way. Astoundingly, Pro Football Focus recorded him as not giving up a single sack in over 500 offensive snaps.

Darnell Savage was the starting free safety in Week 1, and he never let up. Though he missed some action in Week 5 and all of Weeks 6 and 7, due to an ankle injury, he finished the year strongly, missing no snaps in the last five wins. He also was on special teams for 100 snaps.

For their efforts, both rookies were named to several All-Rookie teams. 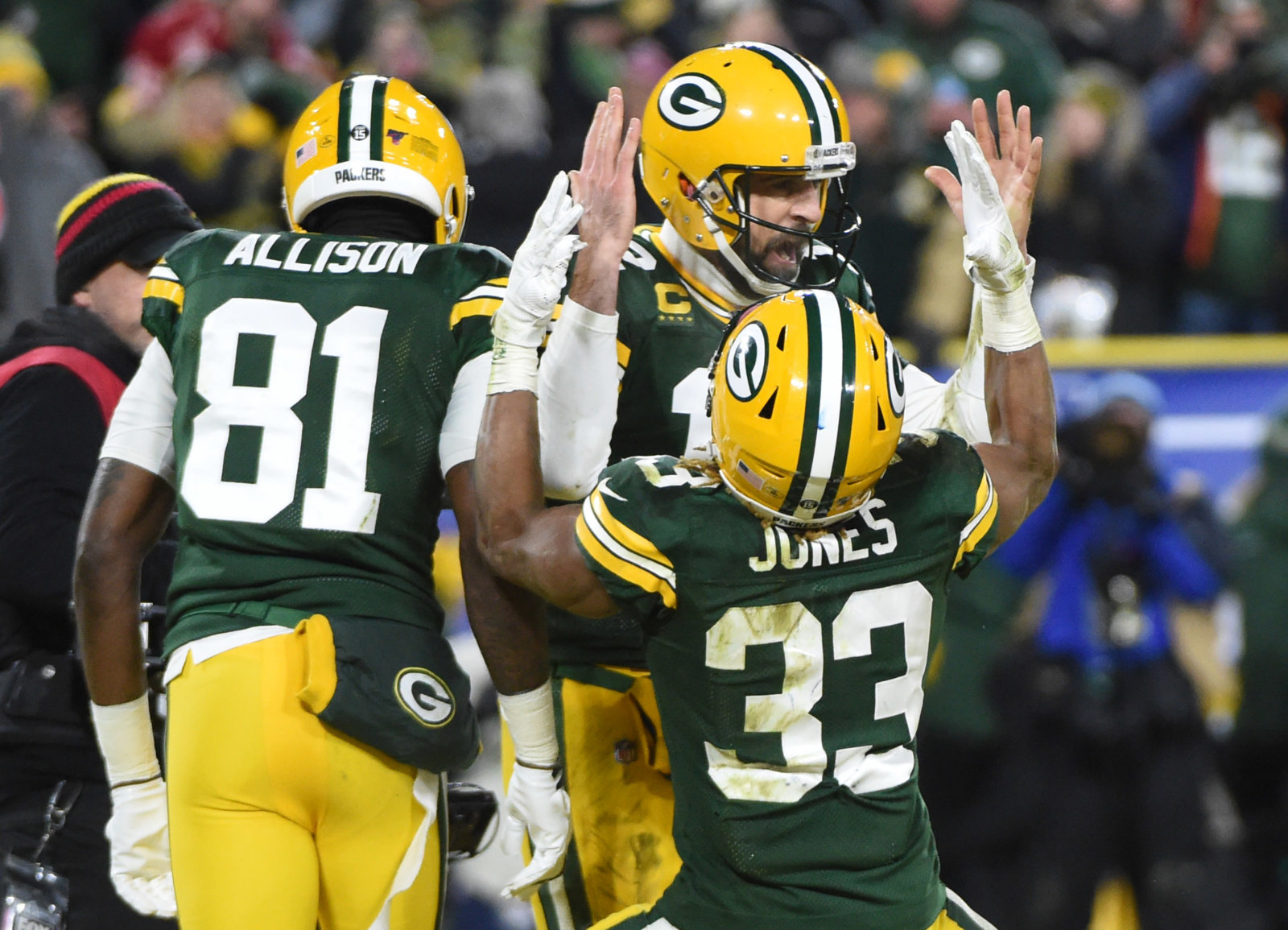 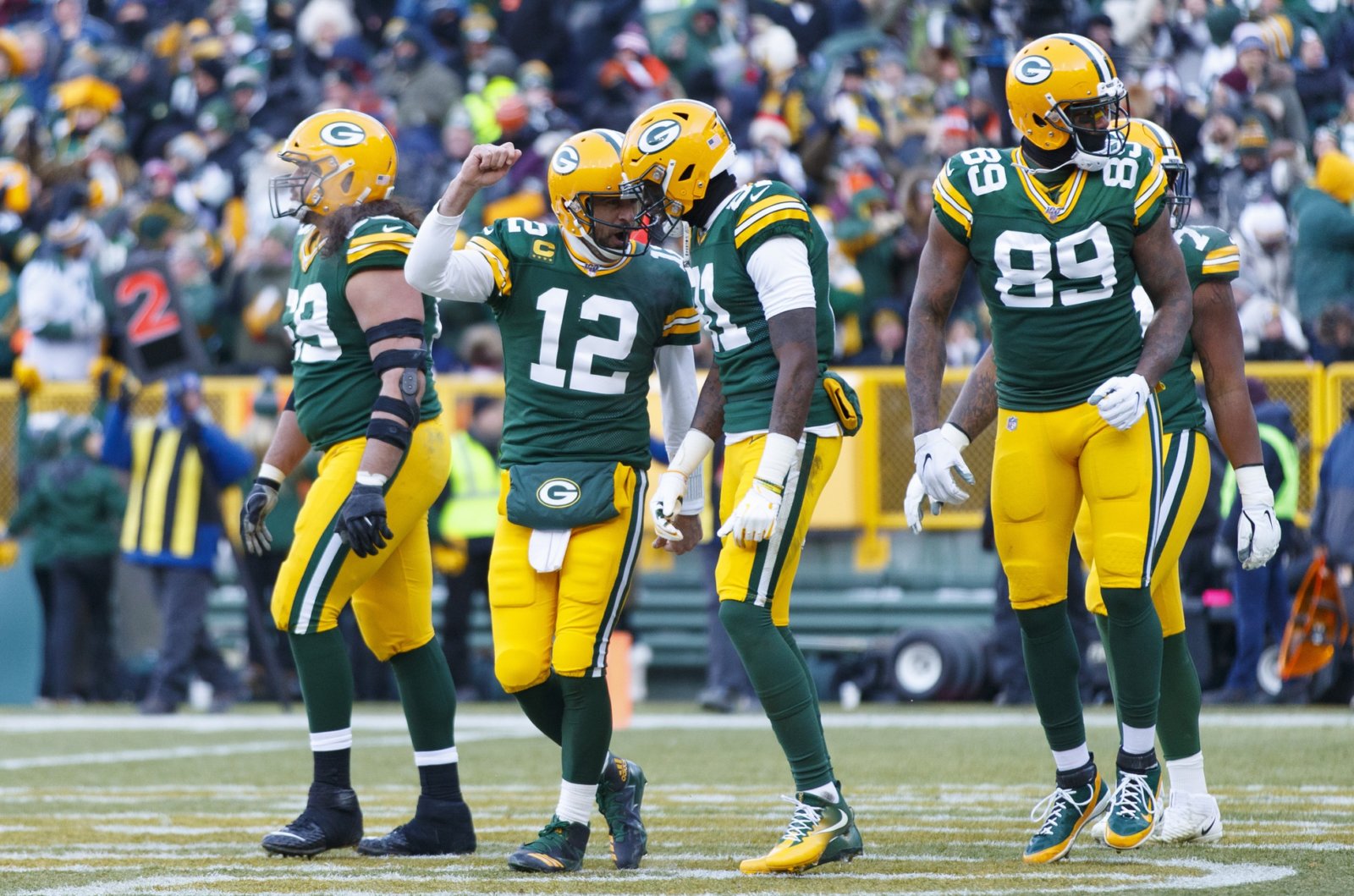 A Realistic Goal for Aaron Rodgers on Sunday