For those unfamiliar with the Seahawks’ insane penchant for fourth-quarter comebacks, games against them are usually all but meaningless until around the ten-minute mark of the fourth quarter. If Russell Wilson would look to run throughout the game, and not until his team has fallen ten to twenty points behind, I’m not sure they’d ever lose – it must be an injury thing. 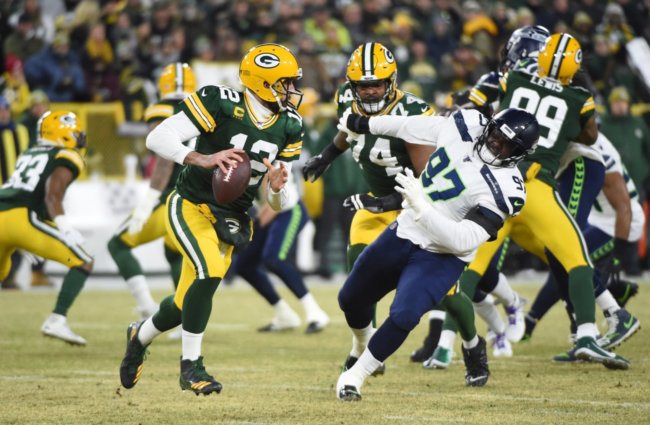 Even to my untrained eye, Mike Pettine’s plan was obvious: keep Russell Wilson from escaping the pocket. Play after play, we saw four pairs of Seahawk blockers and Packer pass rushers embracing in mirror-like symmetry. The rushers were simply trying to maintain, and slowly compress, the pocket, without opening up running lanes for Wilson. And for half of the game it worked.

Seattle adjusted in the second half. Though the horseshoe didn’t break down, instead of passing after three to four luxurious seconds, Wilson began slipping out of the back of the horseshoe, and heading usually to the right flat – where the 5’11” wonder now had unobstructed vision, open running lanes, and another two to four seconds to spot a free-ranging receiver.

The Seahawks used high-percentage passes and Wilson’s run-and-slides to move downfield quickly and at will. I can only once recall a Packers’ defense being in such a helpless predicament: in the Super Bowl following the 1996 season, the Packers could find no way to stop Hall of Famer (and SB MVP) Terrell Davis from gobbling up yardage.

Against Wilson, it became painfully obvious that either the Packers had to score more than 28 points or the Packers D had to somehow stop a Seahawks drive.

Here’s how they did it. With 4:54 remaining and the score 28 to 23, the Hawks offense took over, after a lousy 25-yard punt, on their own 23-yard line. After a 14-yard completion to Lockett, the Pack gets the break they need. With the Packers defenders playing soft and apparently terrified of a big play, receiver Malik Turner drops a perfect pass from Wilson – it should have been at least another 14-yard completion.

Second and ten, 4:08 left. With the coverage finally tightening, Wilson dumps it off to tight end Jacob Hollister, but a sure tackle by Kevin King limits him to a 5-yard gain.

Third and five, 3:22 left. Wilson, from the shotgun, fails to spot Preston Smith, who, despite playing on an injured ankle, gets around Hollister and makes a beeline toward Wilson. The result is a sack, a 6-yard loss, and a fourth down with 11 yards to go.

I expected Carroll to go for it, but he instead elected to punt. His decision was almost borne out to be a smart move. 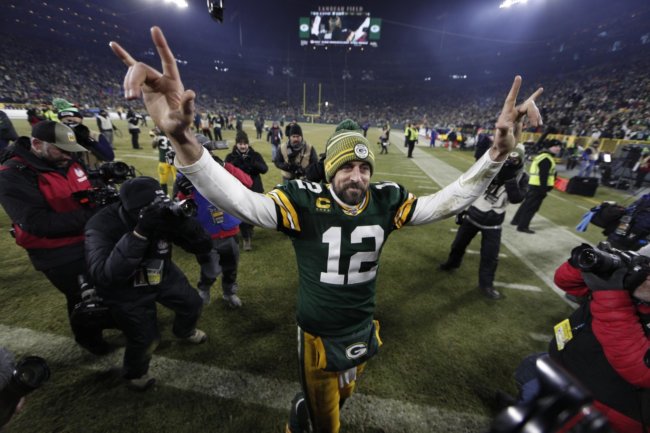 For the final 2:32, it was vintage Aaron Rodgers: a third-and-eight feather-light pinpoint pass to Adams for 32 yards, and then, right at the 2-minute mark, a third-and-nine throw, under a heavy blitz, to Jimmy Graham, who reaches low for the catch and stumbles forward to the invisible first-down marker.

For the game, Rodgers recorded a passer rating of 113.7, slightly surpassing Wilson and his 106.5 tally.

You might recall that after the play was upheld, the main ref went back and looked at “additional footage that came in” and announced for a second time that the play was upheld. The furious antics of Pete Carroll apparently convinced the officials to take such unprecedented action. Carroll will undoubtedly be complaining about that spot for the next five years.

Postgame, the sports broadcasters on the Seattle TV stations in fact issued a whole list of faults they found with the officiating – it’s become part of the Seahawks’ culture to resort to excuse-making.

The players of each team, however, showed nothing but class as they hugged their opponents as much as they celebrated the outcome with their teammates – a fine show of respect after such hard-fought combat.

The first thing I did after the game was to check to see if the Seahawks – and Wilson – play the Packers in the 2020 regular season. Thank God, they do not – but it’s a good bet they’ll renew the rivalry in that postseason.

It’s on to the stadium named after blue jeans, Levi’s in Santa Clara, for a rematch with the 49ers. Matt LaFleur gets a chance for redemption, as he was thoroughly out-coached by close friend Kyle Shanahan in Week 12. In an upcoming post I’ll present some reasons to believe things will be much more competitive the second time around.

In the meantime, let’s enjoy a team that continues in the first year of the Matt LaFleur era to outperform all expectations.