by Jason Parker
in Articles & Analysis, News and Rumors
40

With the Packers back on top of the NFC North, and the Vikings eliminated as a wild card team, it was already a pretty satisfying day for Packer fans even before the kickoff at Lambeau yesterday. Improving upon the last couple seasons of disappointing mediocrity is all most reasonable fans expected from new head coach Matt LaFleur and also GM Brian Gutekunst. But to make it to the NFC Championship is pretty damn satisfying.

It’s only fitting that the first play of the first Packers drive was a 33-yard run by #33 RB Aaron Jones — if anything, his spotlight just isn’t bright enough. Whatever the reason, we did not see much from RB Jamaal Williams last night, but Jones was more than able to carry the running game. I’ve mentioned it before, but Jones is our modern Ahman Green and it shows in this postseason.

Aaron Rodgers seemed to play well and keep his head in the game and his emotions in check. He and WR Davante Adams wreaked havoc on the Seahawks’ defense with Adams claiming 160-yards receiving along with 2 touchdowns. Historically, we all know what happens when a Packers QB and his WR1 are insync throughout the playoffs. Beautiful things happen in this scenario. Although that botched push pass in the red zone during the 2nd quarter was not all that beautiful.

It wasn’t a sexy game at all for our rising star, WR Allen Lazard. After taking a hand-off from Rodgers in the 1st quarter, Lazard ran for 4-yards. The following play, Lazard was called for a critical offensive pass interference that stopped the momentum of the drive. He pretty much disappeared from the game after that mistake. He also was hit pretty hard at the end of the second quarter in a collision with RB Aaron Jones. He returned in the second half from the ankle injury, but was not targeted.

Lazard was an undrafted free agent that made his way through the Jaguars roster to eventually land on the Packers practice squad, and ultimately as a starter at WR2. I am certain he is grateful for the opportunity to even be on the field in the playoffs, but let’s hope he is able to show more of his ability against the 49ers.

It should be mentioned that TE Jimmy Graham did show up last night and was the blocking/receiving tight end he was intended to be.

Seahawks QB Russell Wilson was just overwhelmed by the Packers defense most of the game. Za’Darius Smith and Preston Smith each claimed two sacks — also, Kenny Clark had one sack on Wilson(after having to chase down Wilson – Clark really wanted it). One fact still remains: Wilson is a damn good QB and still has plenty of wins to bring to Seattle in the future.

The great Marshawn Lynch comeback was a bust. Just as he was against the Philadelphia Eagles last week, Lynch was mostly a non-factor outside the redzone.

I am certain that the Packers vs 49ers rematch will be more difficult than anyone left in the AFC for the Packers to face in the Super Bowl. As great as it is for the Packers to be playing in the NFC Championship as a team in a rebuilding phase, it is also not so lucky that their opponent will be someone that embarrassed them earlier in the season with Rodgers playing one of his worst games. Also, unlike the Seahawks who are scrapping by at this point the best they can in the running back department, the 49ers’ rushing-by-committee is still in full force. They’re a more “complete” opponent right now than the Seahawks were last night. 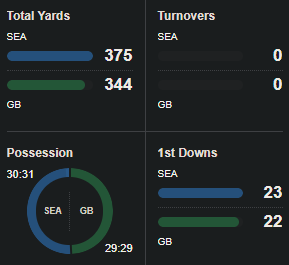 Best sign at any #NFL game. Ever. @packers fans are the best! 💚💛💚💛 #GoPackGo pic.twitter.com/cjKyQKk3M6

FINAL: The @packers are advancing to the NFC Championship Game! #NFLPlayoffs #GoPackGo #SEAvsGB