by Jason Parker
in News and Rumors
69

The great battle of wits between Sean McVay disciples continues in round 2: Green Bay Packers at San Francisco 49ers. This time the NFC Championship, and with it, a trip to the Super Bowl, is at stake.

As you likely know, and are probably tired of hearing about, the 49ers put the Packers over their knee the last meeting with a score of 37-8 — this is despite the fact that the Packers were coming off of a bye week and were a very healthy team. Not only is the NFC Championship at stake, but the Pack’s pride is on the line as they have to prove that they can compete with a team like the 49ers.

Not many people expected the Packers, with a new coach, and with him, a new offensive scheme, to make it this far. In fact, I’ve been traveling this week visiting family because I doubted the Pack would be here when I scheduled this trip. Thanks to Rob Born for carrying the torch and keeping the content coming in the meantime.

Matt LaFleur also worked with Kyle Shanahan’s father, who was the head coach of the Washington Redskins, when LaFleur was the QB coach

Injury Reports(Note: JK Scott has since been added as Questionable with an illness): 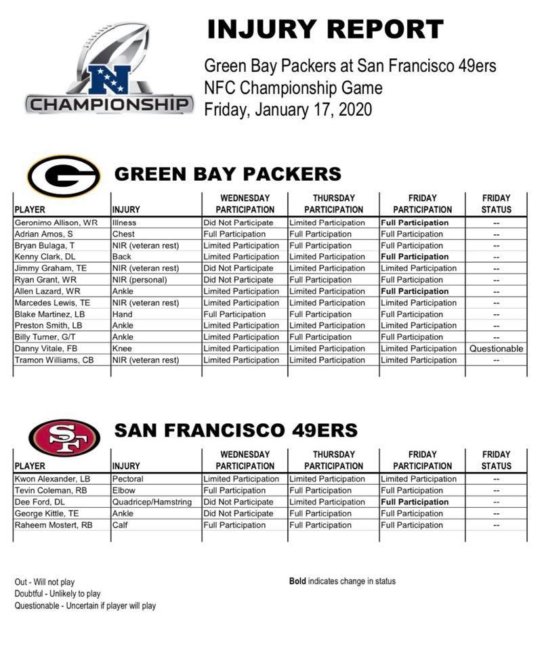