The hypothetical balloting is over: Drew Brees is the Greatest Of All Time. You decide if that means the greatest NFL passer, quarterback, and/or player.

What a season the QB, who is about to turn 41, is having. Last Sunday, Drew solidified his standing at the top of the current heap of QBs. Against the Colts, Drew completed 29 of 30 passes, for 307 yards and four touchdowns, and no interceptions. That computes to a passer rating of 148.9.

In so doing, he increased his league-leading completion percentage to 75.8. It looks like he’s going to break his prior league record of highest annual completion rate, 74.4% in 2018; this in turn broke his previous completion rate record, 71.6% in 2017.

He already holds the career passing percentage mark, at 67.6 % – and rising. 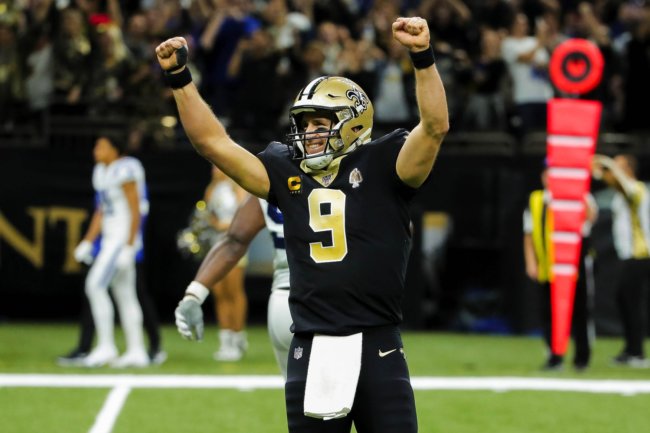 He also jumped into the lead in passer rating this season: his 115.3 now tops Ryan Tannehill, Lamar Jackson, and Kirk Cousins, the others with a rating above 110. If that’s not enough, his completion percentage in this game (.9666) is another all-time NFL record.

The only real competitors for the GOAT designation are Peyton Manning and Tom Brady – two other quarterbacks who played at a high level into their 40s. When Manning hung up the cleats after the 2015 season, he had amassed 71,940 passing yards and 539 touchdown throws. Many thought these marks would last forever.

Here we are, less than four years later, and Drew just threw his 540th (and 541st) touchdown pass. As for yardage, Drew now stands at 76,884 yards through the air – he might wind up with 85,000 or more. For comparison, in his fabulous 20-year career, Brett Favre – the Green Bay gunslinger – finished up with 71,838 passing yards.

Of course Brees can’t compete with Brady when it comes to postseason success. In 19 seasons (I’m not counting 2000 or 2008, in which he barely played), the Patriots won six Super Bowls; the first came following the 2001 season, Brady’s first as a starter. Brady and his mates have also been on the losing end in three Super Bowls. In those 19 years, the Pats have failed to make the playoffs only once (2002).

Of Drew’s 19 seasons (including this one), the first five were spent with San Diego – with only one postseason appearance. Drew, now in his 14th season with New Orleans, has led his team to the postseason eight times (counting 2019). His only Super Bowl appearance was following the 2009 regular season, when the Saints defeated the Colts 31-17. Drew was named MVP in that game; a year later Aaron Rodgers won the honor. Brady has been named league MVP in calendar years 2002, 2004, 2015, and 2017.

Some fans will undoubtedly argue that Brady is the GOAT, based on his postseason appearances and success. I’m framing the GOAT designation, however, as an individual designation. Brees has never been surrounded by brilliant team members and coaches in the manner that Brady has been.

Remember tight end Jared Cook and his one year, 2016, with Green Bay? Though he missed six games due to injuries, his production of 30 catches for 377 yards was still meager for the ten games he did start. Jared then went on to Oakland for two fine years, in which he averaged 61 catches and 792 yards per season. Now, at age 32 he’s with the Saints, where to date he’s had 34 catches for 523 yards (15.4 ypc) and 6 touchdowns. On Drew’s record-breaking game on Sunday, Cook caught 4 of 4 Brees’ throws for 54 yards.

Taysom Hill who went undrafted in 2017, was picked up by the Packers and completed 14 of 20 passes as the Pack’s quarterback that preseason. He was waived, however, just before the regular season, though immediately claimed by the Saints. Though the Saints have used Hill sparingly, they have employed him as a quarterback, running back, and receiver. He generally makes one or two nice contributions per game, and he’s one of the Saints’ fan favorites. Hill caught one of Brees’s four touchdown passes last Sunday.

Tight end Jimmy Graham, a Round 3 draftee in 2010, spent his first five years in the league hauling in Brees passes for New Orleans. From 2011-14, the 6’7” giant annually averaged – yes, averaged – 89 catches and 1,099 receiving yards. I’m guessing this was the most prolific tight end production in league history over such a period of time.

In March of 2015, Graham was traded to the Seahawks for center Max Unger and the Hawks’ first-round selection that year. In March of 2018, Graham signed a 3-year deal with Green Bay for $30 million. Though Graham has had two more future Hall of Fame QBs to work with in Seattle and Green Bay, he must rue the day he had to part ways with Brees.

Before I even became aware of Brees’s latest stellar game, I published a post advocating that Aaron Rodgers use Drew Brees as a role model for modifying his passing ways. In that post (here), I went into some detail about how Drew, year after year, has among the fastest time from the snap to his throws – around 2.5 seconds, and how he’s rewriting the record books on passing proficiency, and how he has defied, the aging process.

What I didn’t point out before is how catchable a ball Drew throws. He delivers a very soft ball, which has a bit of an arc and just floats down into the hands of his receivers. I don’t watch many NFL games that don’t feature the Packers, but others I’ve seen who like to deliver soft balls are Patrick Mahomes and Lamar Jackson – that’s good company to be in. I don’t have to do research to know that good ol’ Brett could never achieve high completion percentages with the kind of heat he threw.

I also indicated that Drew does all his magic despite being under-sized, and having only ordinary athletic ability. You ought to take the time to view the eight minutes of mastery contained in Drew’s latest highlight reel. When you complete 29 of 30, pretty much every play is a highlight.

Talk about rounding into form by the end of the regular season – Green Bay fans pray for this every week, but the Saints have done it. The Pack’s defensive backfield just isn’t prepared for the way Drew Brees is playing. As for the Smiths, even with a great game by both, the ball is going to be out of Drew’s hands by the time they get near him.

Don’t fret the 49ers, or any team other than the Saints. Let’s all pray, people, that the Packers can avoid playing New Orleans in the course of the postseason.