Those of you who weren’t satisfied with the Pack’s 18-point win over the Giants must really be in a funk after the Redskins win.

What didn’t go unrewarded was the typical effort that Aaron Jones put forth – both on his 16 running plays and his six receptions. His total offensive production (134 rushing and 58 receiving) of 192 yards comprised 56% of his team’s total yardage. Who knows how much he would have totaled had he gotten the number of carries he deserves. 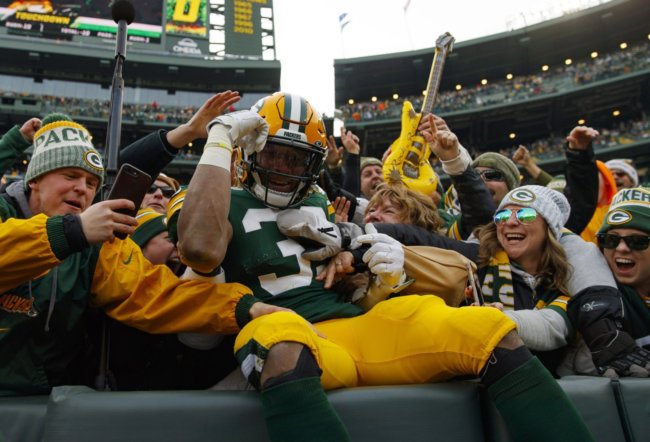 And it could have been 66 yards more. Early in the fourth quarter, with the game still close and the Packers facing a third and nine from their own 34-yard line , the Packers dialed up a dandy – yes, LaFleur finally resorted to the unexpected. Jones, situated as a wideout on the left side, drew 245-pound linebacker Jon Bostic in coverage. Jones made a sharp cut toward midfield but quickly reversed himself and went wide and deep.

It was a stutter-step worthy of Davante Adams, causing the defender to stumble, and allowing Aaron to be two full strides beyond Bostic. Though it wasn’t a particularly long throw, and though Rodgers had fine pass protection, his pass sailed way beyond the target – an opportunity squandered.

I think it’s typical of NFL teams to game plan for maybe two to four special plays against each opponent. These are big-play opportunities, which usually involve getting a fast receiver in a favorable matchup against a slower defender. Play callers wait for both the right matchup and the right moment to call such plays. Opportunistic teams rely upon one or two of these plays getting called every game. Successful practitioners of the art included coach Belichick and Tome Brady, Pete Carroll and Russell Wilson, and Andy Reed and Patrick Mahomes

Worse yet, Rodgers squandered a second such opportunity against the Redskins. With 10:34 left in the second quarter, LaFleur again picked an unexpected moment, and an unexpected receiver, in hopes of a big play. It was first and ten at Washington’s 46-yard line, and tight end Jimmy Graham was sent streaking across the field from right to left. Rodgers faded back fifteen yards to allow time for the play to develop – but then greatly overthrew his massive receiver, though Jimmy had a step and a half on his defender.

Had either of these special plays been executed properly, this game wouldn’t have been the nail-biter Packers fans have become accustomed to. 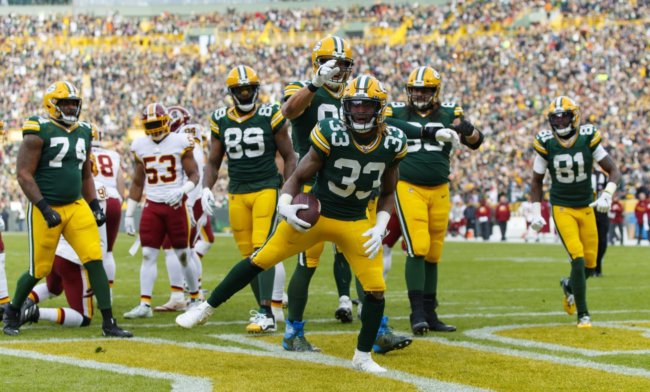 Among Jones’s highlights on Sunday was the following gem. Nursing a 17-9 lead in the middle of the fourth quarter, LaFleur found himself with a third down and 14 to go. Under Mike McCarthy, the Packers don’t even try to convert in such a situation – and certainly not with the ball on the Packers’ 7-yard line.

With an empty backfield, Jones lined up short right. This time Rodgers doesn’t hesitate – he sends a laser twenty yards downfield, and just over the double coverage. Jones makes a nice leaping catch. For a moment, it seemed Jones had himself a 93-yard touchdown. The refs ruled that Jones was down by contact, though he was on his feet the only time a defender reached out and touched him, and the touch did not assist in Jones initially going to the ground. Bad call? (Non-reviewable?) Best and most aggressive throw of the year for Aaron?

Do you see a pattern? Jones is at his best in big games.

I’ve disparaged the head coach’s platooning of his two talented running backs a bunch, but apparently not enough. I’m being repetitive, but then again the evidence just keeps piling up.

Great rushers almost invariably thrive on heavy use. Very often you’ll see a defense keying on, and holding down, a premier running back for a quarter or maybe the entire first half. But great backs tend to do their best work as games go on and defenses wear down.

Almost whenever his keepers decide to give him some leash, Jones responds well. Aaron averaged 8.38 yards per carry on Sunday. When he got 19 carries against Dallas, he averaged 6.63 ypc. His highest number of carries on the year was 23, against the Vikings, and he again averaged over five yards per carry.

It’s hard not to spot the trends. Aaron Jones thrives on heavy usage – as he did throughout his four years at UTEP. And the Packers tend to win when he is heavily used, and to lose when he isn’t. Also, this team tends to abandon the run too early when it’s not working well.

I strongly believe that LaFleur, and more so Big Mike before him, have hindered a great player from achieving anywhere near his potential. Jones currently ranks fourteenth in rushing yardage among NFL running backs. His 779 yards is over 500 yards behind Nick Chubb (CLE). Nick Chubb – who has 78 more carries than Aaron! He’s hundreds of yards behind Josh Jacobs (OAK), and he’s even behind guys like Carlos Hyde (HOU), Marlon Mack (IND), Mark Ingram (BAL), and Joe Mixon (CIN). Marlon Mack – are you kidding me?

Those 16 carries on Sunday allowed Jones to climb up all the way to 18th in carries among the league’s running backs.

I can’t think of another football player who has Aaron’s love for the game. In the most intense moments, Aaron is out there grinning, joking, and having fun. He’s loose and calm. Paul Neumann once played Cool Hand Luke – Packers fans have the pleasure of watching Cool Hand Aaron. His personality draws you in like a magnet.

He doesn’t gripe or complain. He’s a team guy, not someone who goes to the media and demands more playing time. He’s Green Bay’s most popular player, and their best player. How far this team goes utterly depends on how much greatness they can get out of him.

Back on October 31, I did a post saluting Aaron (here) – worth a re-read. At that time I pointed out:

“Packer fans are eager for even more highlight films of Jones as the year progresses. Though he’s already twice been named NFC Offensive Player of the Week this season, I won’t be surprised if he picks up one or two more of these awards by season’s end.”

What about it, NFL? Is it time for Aaron to be named the league’s OPW for a third time?

Previous Article
No Question, Coach LaFleur Was the Right Choice For Packers
Next Article
Mike McCarthy Getting Ready for a Comeback?