by Jason Parker
in News and Rumors, Articles & Analysis
60

After a long and agonizing two week wait, the Green Bay Packers will take the field again tonight in San Francisco at Levi’s Stadium. While it is certain to be a tough road game for the Packers facing a 9-1 team, there is some reasonable doubt cast upon the 49ers’ winning streak(prior to their loss to the Seahawks) due to their very easy early schedule this season. With that said, having watched their game against the Seahawks, they’re still a damn good team with high caliber players on both sides of the ball. However, it’s still hard to overlook that fact that they scored 9 points against the currently 1-9 Washington Redskins.

One thing that really stands out this game, other than the obvious fact that the Packers are coming off a bye week, is that the Packers are pretty much as healthy as you could possibly expect a team to be in week 12. On the other hand, the 49ers are more banged up — although recent reports indicate that 49ers TE George Kittle, WR Emmanuel Sanders, and WR Deebo Samuel are expected to be active despite some earlier doubts. Kittle had missed the previous two games when the 49ers lost to the Seattle Seahawks and barely squeaked by the Arizona Cardinals.

Matt LaFleur also worked with Kyle Shanahan’s father, who was the head coach of the Washington Redskins, when LaFleur was the QB coach

If the Packers win, head coach Matt LaFleur will tie Mike Holmgren and Mike Sherman for most wins as a first year coach of the Packers.

49ers’ QB Jimmy Garoppolo is tied at 4th in the league for interceptions with 10. Expect to see relentless pressure put on him by the Packers to keep him hurried and prevent him from establishing a comfortable pace. That goes for almost any opposition QB, but expect it tonight more so than average as Garoppolo is still relatively inexperienced and has already shown to make mistakes under pressure.

Unlike their west coast game against the Los Angeles Chargers, the Packers waited until Saturday to travel to San Francisco 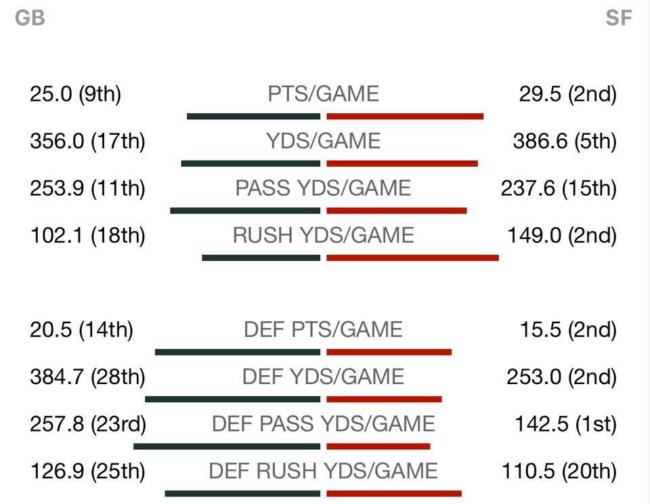