I’ve been unable to find any critiques of Za’Darius Smith’s game against the Cowboys. This needs to be discussed. Below are some of Z’s lowlights – yes, LOWlights.

3rd Quarter, 7:54 remaining – Za’Darius Smith is called for illegal use of hands. He put both hands under Cameron Fleming’s face mask and thrust his head backwards for several seconds – an infraction that couldn’t be missed. The penalty was declined, but only because the play resulted in a 20-yard completion.

4th quarter, 14:03 remaining – Prescott’s pass from the GB 10-yard line is an apparent turnover, when Jaire Alexander tipped the pass and Will Redmond intercepted it in the end zone. That should have been the ball game – but the crucial turnover was nullified by another illegal use of hands call against Z. By the way, after the play Kenny Clark added insult to injury by being called for unsportsmanlike conduct. Both penalties were marked off, putting the ball near the 2-yard line. Elliott then took it in on the next play, making the score 31 to 16 – and preserving precious time.

4th quarter, 8:07 remaining – Immediately after Mason Crosby’s field goal seemingly put the game out of reach, Prescott completed a 7-yard pass, but Z was called for unnecessary roughness – after the play was over. At a time when the Packers were trying to run time off the clock, after one puny play Dallas was set up near midfield. The next play was a 53-yard touchdown completion to Amari Cooper. The entire drive, aided by the untimely penalty, consumed 14 seconds, and it’s 34-24. By the way, on this play Z was put on his back by a clean but violent block, which prompted his retaliation. 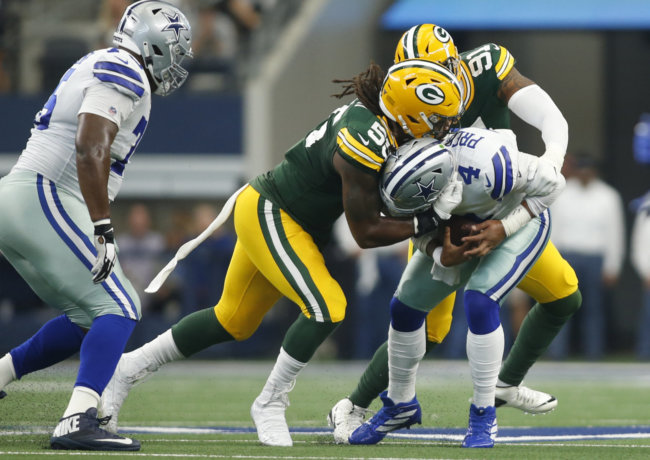 Za’Darius was actually a bit lucky on Sunday. With 6:03 left in the 3rd quarter, the Cowboys were faced with a 3rd and 18 to go. A good pass rush, with Fackrell and Z hitting Prescott as he was in the throwing motion, caused an incompletion, so the Boys kicked a field goal on the next play. While Fackrell’s hit was clean, Z chose to head-tackle the QB. He brushed across Prescott’s face guard, grabbed the top of his helmet and put the quarterback on the ground. This very easily could have been called a blow to the head or a roughing penalty, though Z did let up just a bit rather than slamming the QB to the ground. This favorable non-call on Smith probably prevented the Cowboys from scoring a touchdown instead of a field goal.

You might also have seen that when Kevin King recorded his interception, with 10:29 left in the 4th quarter, Za’Darius drew the attention of almost everyone in the stadium by getting right into Prescott’s face and taunting him. That’s bush league, and it certainly could have – should have – resulted in another 15-yard walk-off against Green Bay.

Fortunately, many of the Cowboys were as unhinged as was Smith. With 19 seconds left in the third quarter, Dallas had a first and ten on its own 30. The magnificent Amari Cooper made a beautiful catch along the sideline, which was initially ruled incomplete. Replays, however, clearly showed he got both feet down in bounds, but it required Cowboys coach Jason Garrett using his final challenge to get the call right.

Not only did Garrett slam down the red flag in the vicinity of the official’s feet, but referee Ron Torbert confirmed afterwards that the penalty “was for abusive language toward an official.” Instead of a devastating 27 yard gain, the play netted only 12 yards for the desperate Cowboys.

Postgame, Garrett stated the obvious: “Obviously, I didn’t handle that situation as well as I should have.” Never to be outdone, Cowboys’ owner and GM Jerry Jones added a little touch of Dallas class. “Oh, I hope the little darling didn’t hear something he hadn’t heard before. We should all stop the wheel over that if he got [a penalty for] abusive language.” Whatever that means.

For the game, the Packers were penalized nine times for 78 yards; the Cowboys were called 11 times for a loss of 124 yards.

Coach LaFleur mentioned several times following the game that his team has a lot of things to clean up. I hope he was referring in large part to Smith allowing his lack of self-control to jeopardize a hard-earned 28-point lead. As noted above, a good portion of the Dallas comeback can be ascribed to Smith using his body but not his head.