USA Today have recently unveiled their top 100 NFL players of all time, which has been selected by a 19 man panel, and the Packers have been well represented with a total of 10 players who have represented Green Bay making the cut.

We’re going to have a look at those who were rated as the top five in a little more detail.

Nitschke, who was a quarterback during his early years of playing football, goes down as one the best defensive players we’ve ever had. His tenacious attitude and fearlessness combined with his leadership skills saw him marshal our defense to back to back Super Bowl wins (the first two) as well as five NFL championships. Not that he needs more evidence to support his case by a career entirely dedicated to the Packers does earn him bonus points in my eyes.

It’s crazy to think that not too long ago a few were starting to question Rodgers, but since Matt LaFleur came on board, the 2005 round one pick has proven his worth – again. Not to say that LaFleur is responsible for the recent achievements of Rodgers, but one thing is certain: he motivates Rodgers to play at his best; something former head coach Mike McCarthy did not do. Rodgers is the only one of the Packers’ top 100 selections who is still playing, which is impressive in itself but if he can help Green Bay to another successful season – and the signs are looking good early on – expect him to climb further up the rankings.

He’s already starred as MVP in the victory at Super Bowl XLV and two season MVP awards have been added to his personal trophy haul as well. If you are backing the Packers to be favorites in the NFL playoff betting odds, you know Rodgers will probably be a key player on that. 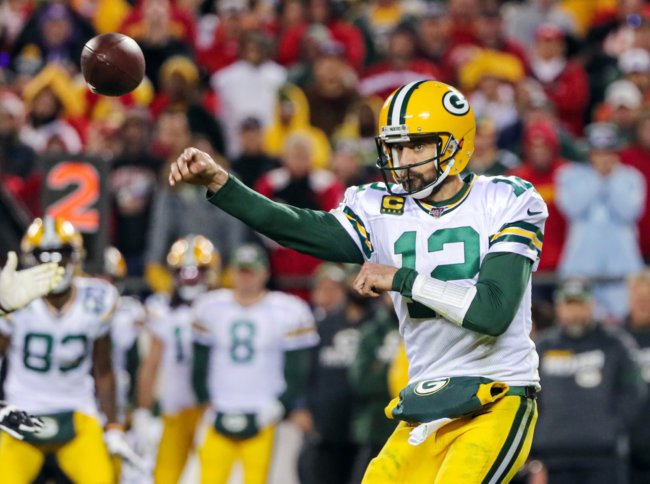 In my opinion, Favre’s overall ranking of 26 isn’t high enough for a man who is one of the greatest quarterbacks the NFL has ever seen. During his career, 16 years of which were spent with Green Bay, Favre threw more yards and more touchdowns than anyone else and retired with an impressive 62% pass completion from over 10,000 attempts. 11 pro bowl appearances and a Super Bowl victory aren’t a shabby start to an honors list either; mind you, it’s somewhat easier to wrack up stats like that when you play over 300 games on the spin!

Hutson’s influence on the Packers will no doubt pre-date most of the fans’ memories but many of the paths you see in today’s game exist because of him. Hutson had the speed to outrun a horse and when put together with agility and handling you were left with one of the most fabulous receivers the game has ever been witness to. During his Packers career Hutson won a hat-trick of NFL titles, was named MVP twice and turned in consistent performances that saw him retire with a host of records, some of which are still intact today.

The USA today rankings have White sitting higher than any other Packer in their list and it’s clear to see why. The defensive end was named defensive player of the year on two occasions and registered a phenomenal 198 sacks during his career, including a historic one during his only Super Bowl triumph in 1997 with Green Bay. White had incredible quality but his consistency is what separates him at the front of the pack and being named in the pro bowl for 13 consecutive seasons is proof of that.

There you have it — five players who have given Green Bay so much over the years. Will any of the current team – Rodgers aside – force their way into the reckoning in future? Given how the season started, perhaps they will and, if they do, they’ll be in very good company.