by Ed Rooney
in Articles & Analysis
9

The Packers enter this week’s game with the Raiders with a 5-1 record, but have numerous injuries to report and the bye week still a month away. There are 16 players on the injury report, the most significant among the receiving group, as the top three all missed the final day of practice for the week.

Davante Adams has missed the last two games with a toe injury and will be out again this week. Geronimo Allison is still recovering from chest injury and concussion sustained last week and Marquez Valdes-Scantling is hampered with a knee and ankle injuries. Other skill positions banged up include both tight end Jimmy Graham (ankle) and Robert Tonyan, quarterback Aaron Rodgers (knee) and running back Aaron Jones (shoulder), who had limited participation in practice. The offensive line has remained intact, with no significant injuries to report. Only tackle Bryan Bulaga was limited in practice and was just to rest.

On the defensive side of the ball, safety Will Redmond (shoulder/ankle) and linebacker Za’Darius Smith (knee) participated in full practice and should be good to go. Cornerbacks Tony Brown and Kevin King were both limited in practice, while safety Darnell Savage (ankle), cornerback Tramon Williams (knee) and defensive lineman Kenny Clark (calf), did not practice. Darnell Savage is very unlikely to play this week.

The Packers face the Raiders and Panthers at home and the Chiefs and Chargers on the road before their bye week. While the injury report isn’t overwhelming, they need to keep momentum and heal over the bye week. The final push is four road games in the last six. The team will need to be healthy at the end, with their last three games divisional at home against the Bears and on the road against the Vikings and Lions. 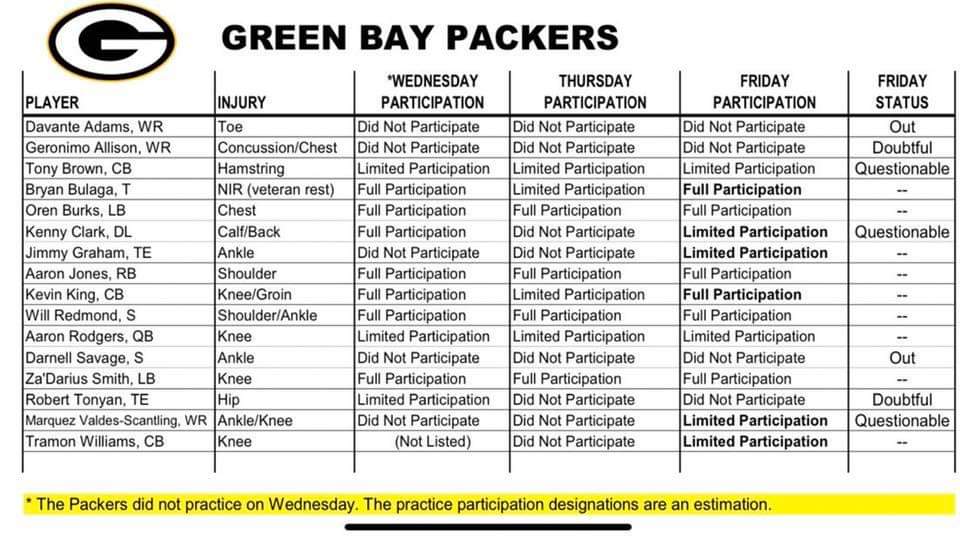 According to Coach Matt LaFleur, Davante Adams is Officially Not Playing Sunday Against the Raiders