The Green Bay Packers take a 6-1 season record into Kansas City Sunday night to take on the 5-2 Chiefs. Kansas City is 4-0 on the road and a surprising 1-2 at Arrowhead Stadium. The Packers are making their third road appearance this season, winning their previous two.

Offensively, the Chiefs are among the highest scoring teams, ranked third at 28.9 points per game. The Packers are ranked 10th averaging 26.3 per game. Kansas City is vastly improved defensively, ranked 13th in points allowed at 21.4 per contest, while the Packers are ninth giving up just under 20 per game.

The Chiefs’ offense goes through Patrick Mahomes, who has thrown for 2180 yards and 15 touchdowns with only a single interception. However, after a dislocated knee in last week’s game, he’s listed as doubtful. Veteran Matt Moore is likely to get the start. He completed 10-of-20 for 117 yards and a touchdown last week in relief.

With Moore in the lineup, the Chiefs will rely more heavily on a running attack led by LeSean McCoy. The 11-year veteran has rushed for 322 yards and averaging 5.4 per carry. Damien Williams is second on the Chiefs in attempts but has struggled to find room to run, averaging just 1.7 per attempt.

When the Chiefs choose to attack through the air, they will likely look for arguably the best tight end in the league in Travis Kelce, who had 38 catches for 541 yards. Kansas City spreads the ball around nicely, with Sammy Watkins, Mecole Hardman, Demarcus Robinson and Tyreek Hill each with three touchdown receptions this season.

Kansas City has been very active defensively, recording 20 sacks, six interceptions and 14 forced fumbles. Emmanuel Ogbah, Frank Clark and Alex Okafor head the pass rush, combining for 9.5 sacks. Kicking Harrison Butker hasn’t attempted a kick from 50 on out, but has converted 14-of-16 tries this season.

The Packers have been getting stellar play from Aaron Rodgers, who is coming off a five-touchdown passing game. He’s thrown for 2019 yards and 13 touchdowns with only two interceptions. His numbers have been particularly good considering the Packers have been without top receiver Davante Adams. Marquez Valdes-Scantling has picked up the slack with 27 receptions for 416 yards and two touchdowns. Jimmy Graham and Jamaal Williams lead the team with three touchdown receptions.

On the ground, Aaron Jones has shown a nose for the end zone, having scored eight times, while rushing for 399 yards on 101 carries. Jamaal Williams has been a good change of pace back, rushing for nearly 200 yards on 4.6 per carry.

Defensively, the Packers pass rush has generated 18 sacks with 13 of them coming from the duo of Preston Smith and Za’Darius Smith. The defense has also been opportunistic, having picked off eight passes with seven forced fumbles. Mason Crosby hasn’t had the number of opportunities as Butker, but has been nearly automatic, hitting 10-of-11 field goal attempts this season.

The Packers play four out of the next five games on the road, heading to Los Angeles next week before returning home for a match up against the Carolina Panthers. 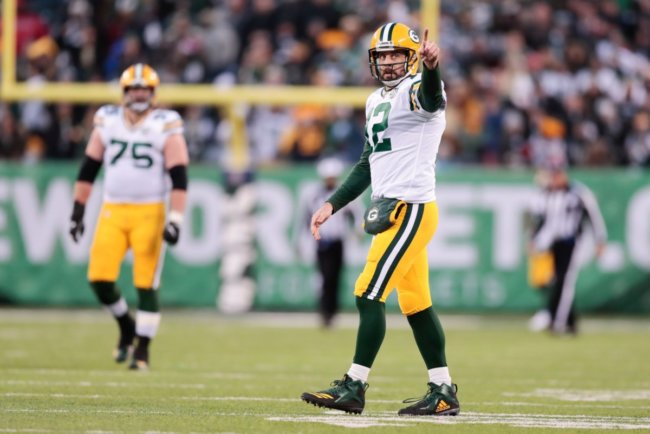 Aaron Rodgers (12) points to the scoreboard during a replay during the second half against the New York Jets at MetLife Stadium. Vincent Carchietta-USA TODAY Sports

Previous Article
A Few Thoughts on Packers vs Raiders Win
Next Article
Is Davante Adams Playing Against the Chiefs? Yes, No, and Maybe.