Kansas City Chiefs QB Patrick Mahomes is one of the most talented young quarterbacks in the league right now. With the Packers facing the Chiefs in an away match-up in Week 8, this Sunday night game was likely to be the toughest so far of the season for Green Bay. While an injury of any player is nothing to celebrate, it does seem that the Packers are getting all the breaks so far this year.

The MRI has confirmed the #Chiefs QB Patrick Mahomes suffered a dislocated kneecap, but not significant additional damage, sources tell me and @JamesPalmerTV. He’ll seek additional opinions to be sure. The plan is for him to return this season after a brief absence.

A dislocated kneecap will put Mahomes on the sidelines for at least three weeks — although that is a bit optimistic. The injury occurred during an away game for the Chiefs against the Denver Broncos. He went down in the 2nd quarter, but there was some optimism when he was able to walk on his own. The play was a 4th down QB sneak and, according to quotes from Chiefs players, it seemed quite obvious right away from physical appearance that the injury was not minor.

Following an MRI analysis, the injury will certainly keep him off the field for a least the near future. Of course, an injury like that could have been much worse.

QB2 Matt Moore will be filling in for the MVP-tier quarterback. The Chiefs are currently 5-2 and lead the AFC West. The Minnesota Vikings will also face them on November 3rd. 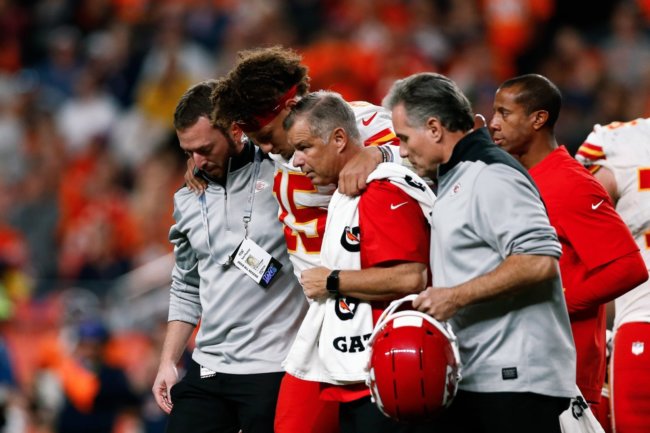 Previous Article
Allen Lazard – The Unlikely Hero
Next Article
According to Coach Matt LaFleur, Davante Adams is Officially Not Playing Sunday Against the Raiders