We can’t re-live the great win over the Kansas City Chiefs last Sunday too many times. There was great coaching, spell-binding highlights, an inspiring finish – and it was a great team effort. It got me to thinking how far the new coaching staff has come in their first eight games with the Packers – though they still have a ways to go.

Matt LaFleur was hired as head coach by the Packers on January 8. Less than a week later, Nathaniel Hackett was selected to be the team’s offensive coordinator. Sure, both guys are NFL junkies, and they certainly had some awareness of Aaron Jones and Jamaal Williams when they arrived at the City on the Bay. On the other hand, neither had ever been a regular season opponent of the Packers in the two seasons since Jones and Williams turned pro in 2017.

While they must have studied lots of film of their new roster of players, it appears to have taken a while for the coaches to fully appreciate the two running backs the team had secured in the middle rounds of the 2017 draft.

Aaron Jones was chosen by Green Bay late in the fifth wound, number 182 overall. Williams, you might recall, was selected in the fourth round, almost 50 picks ahead of Jones. While we should credit the Packers’ scouts and GM with a couple of wise selections, if the Packers had any true idea of Jones’ abilities – or the rest of the league for that matter – he would have been picked off much earlier.

How come some players are largely overlooked at draft time? More often than not, it’s because they starred on teams that played in inferior conferences. No matter how well some of these bargain draftees played in college, there’s a common presumption that the inferior competition is what made them look good. UTEP played in Conference USA, which features the likes of Old Dominion, Louisiana Tech, and Western Kentucky.

Another factor that comes into play: an average showing at the NFL Combine. Aaron, however, had mostly above-average Combine numbers – except for his 4.56 dash time, which was but 47th percentile. But tell that to the three Chiefs’ defenders who Jones left in his wake on his 67-yard touchdown jaunt that provided the margin of victory last Sunday.

At the end of the Packers’ disastrous 2018 season, I detailed at great length how Jones from 2013 through 2016 re-wrote the record books at the University of Texas El Paso. We now know that Aaron, with his cumulative 5.5 yards per rush, was extremely productive in his first two years in the pros. But that should come as no surprise, as Aaron’s yardages per rush averages in college were: 5.2, 5.5, 6.5 and then 7.7 in his final year.

This was even though defenses who played UTEP invariably had but one goal: hold down Aaron Jones. By the way, much of my earlier posting, titled “Aaron Jones: Under-used and Misused,” describes how Coach Mike McCarthy underutilized this great talent. 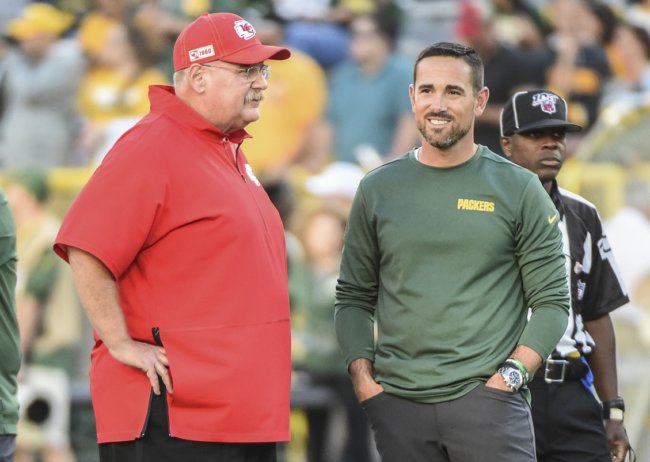 The Education of Matt LaFleur

At any rate, the hiring of Matt Laleur was supposed to have ushered in a new era in Green Bay. No longer would the talent of Aaron Jones go to waste! After all the film studies, training camp practices and preseason games, the brilliant new Packers’ head coach and his staff were utterly ready to take full advantage of its fifth round steal! Right?

Not quite. Or at least not right away. Through the team’s first four games this season, Aaron topped thirteen carries only once, and his receiving output was less than 20 yards per game. Against Denver in Game 3, the prolific rusher averaged an uncharacteristic 1.9 yards per carry, and in the Game 4 loss to the Eagles, that average fell to 1.62. LaFleur obviously had yet to figure out how to best employ Jones.

It took until the Dallas game in Week 5 for La Fleur to start getting his ducks in a row: Aaron rushed 19 times for 107 yards and four touchdowns. He also hauled in seven of eight passes for 75 yards – along the way to completely outplaying Ezekiel Elliott, the Cowboys’ fearsome power runner, Despite this awakening, LaFleur reverted to his platooning style, with Aaron only getting 11, 12, and 13 carries in Games 6 through 8; running mate Jamaal Williams got 24 carries during those three games.

Even so, Aaron turned those 13 carries against the Chiefs into 67 yards, including that forever-memorable final clock-killing drive in which Jones produced two critical first downs on five consecutive carries. In other words, until just over five minutes remained in the big Chiefs win, Aaron had only eight carries on the night.

Yes, he’s still being under-worked in my opinion. Whenever this team is near the opponent’s goal line Jones needs to be on the field. And whenever the Pack reaches the red zone. And whenever the team gets to third down. These should be no-brainers.

While I’m convinced that LaFleur has yet to maximize Arron’s rushing prowess, the coach and play caller must be credited with how he has helped turn Jones into a dangerous receiver. Over the last four games, all wins, Jones has been targeted 27 times, catching 22 passes for a whopping 280 yards and three touchdowns.

Despite his slow start to the season, Aaron’s 355 receiving yards ranks third-best among running backs, behind just the Chargers’ Austin Ekeler (507) and the Pats’ James White (358). On Sunday, we’ll get to see how Ekeler, undrafted out of Western Colorado in 2017, has caught the NFL’s attention – he’s on pace to catch over 100 passes on the year. 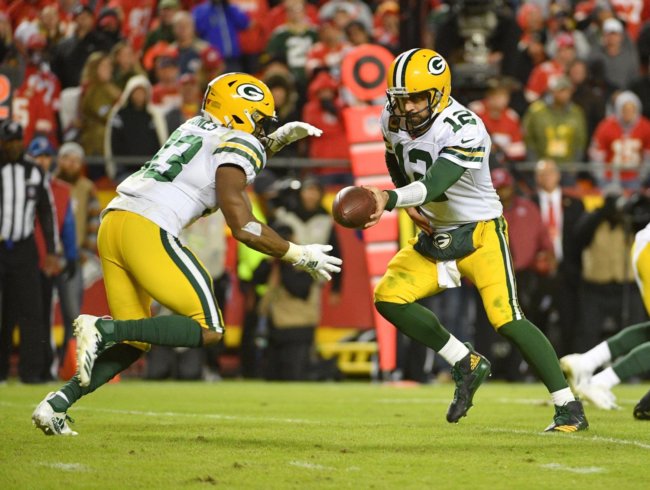 Most notably, Aaron has managed to get deep from out of the backfield several times: there’s the 50-yarder against the Chiefs, the beautiful 21-yard TD catch against the Raiders, and the drop of a would-be TD pass against Detroit in Game 6. As LaFleur continues to devise ways to get Jones isolated on linebackers, good things are inevitably going to happen. LaFleur is increasingly putting Aaron in motion, bunching him behind receivers, or stationing him as a wide-out – ploys that have caused defenses much grief.

At the season’s mid-way point, Aaron Jones has 114 carries. This compares poorly to several of the league’s other great backs: Leonard Fournette (JAX), 163; Dalvin Cook (MIN), 156; Christian McCaffrey (CAR), 141 in 7 games; Ezekiel Elliott (DAL), 135 in 7 games. LaFleur has done better at getting Aaron out and open as a receiver: his 34 catches ranks him sixth highest among running backs.

Now that the new coaches are grasping how special Jones is, and as they increasingly find ways to get him in open space with the ball, things bode well for the second half of the season.

Amidst these good tidings, however, there’s always some worrywart who wonders aloud if Aaron can hold up for the entire season. When asked that question by a reporter following the Chiefs game, Aaron made quick work of it: “I don’t get tired. I don’t get tired. Heh-heh-heh.”

Packer fans should be looking forward to even more highlight films of Jones as the year progresses. Though he’s already twice been named NFC Offensive Player of the Week this season, I won’t be surprised if he picks up one or two more of these awards by season’s end. Aaron, who goes by (@Showtyme_33) on Twitter, is indeed putting on a show for us so far this year – and things should only improve even more now that LaFleur and company are getting to better acquainted with their versatile third-year running back.

Postscript: I’ll save discussion of Jamaal Williams for another time, though he’s my candidate for the team’s most improved player of 2019.