Head coach Matt LaFleur will take his of wily group of youngsters(and also Aaron Rodgers) on the road for the first of two back-to-back road games against AFC opponents. While, at this point in the season, this is not really a must-win for the Packers, they’re in the tough NFC North division and could use some extra breathing room over 2nd ranked Minnesotta Vikings(who also will face the Chiefs on November 3rd).

Chiefs QB Patrick Mahomes is officially ruled out from participating. Now pray for his recovery before they face the Vikings next week(highly unlikely though). In his place will be Matt Moore, who, at the age of 35, only has 30 career starts.

Also out for the Chiefs is LT Eric Fisher, LG Andrew Wylie, DL Chris Jones, DE Frank Clark and CB Kendall Fuller. They’re a really banged up team at the moment and this will obviously work the Packers’ advantage.

Kansas City is ranked 29th in the league at rushing yards allowed with an average of 148.9 yards per game. Expect to see Packers RBs Aaron Jones and Jamaal Williams to be heavily utilized. This is also going to open up opportunities for Aaron Rodgers’ young group of receivers down field.

Another discrepancy between the teams is that the Packers are ranked 4th for Penalty yards per game while the Chiefs are ranked 26th. This is an impressive stat for Green Bay considering it is a new offense for the team as well as a very young team overall.

Ian Rapoport provided an update on the status of S Darnell Savage and LB Blake Martinez:

According to Adam Schefter, WR Davante Adams is highly unlikely to participate, but this should not come as a surprise to those following the situation:

Packers’ WR Davante Adams, listed as doubtful for Sunday night vs. the Chiefs due to turf toe, is not expected to play, per sources. But Adams is likely to return next week at the Los Angeles Chargers, per source.

The Chiefs and the Packers are #1 and #2, respectively, for yards after the catch: 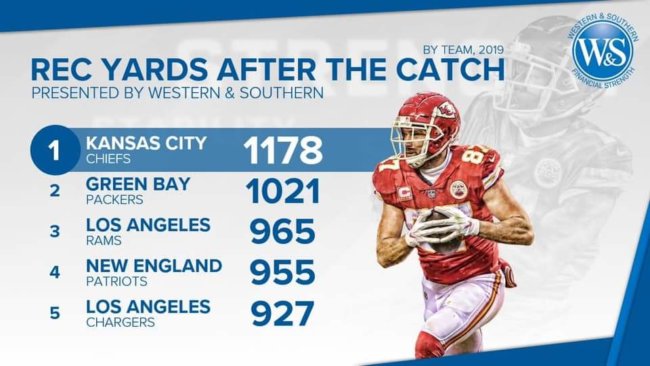 Previous Article
Will Darrius Shepherd Return Punts Against Kansas City?
Next Article
Packers Over Chiefs in a Nail Biter – 31-24