But for Green Bay, the Minnesota Vikings would probably be shopping Kirk Cousins right now.

The Vikings made a supreme commitment to Cousins when they signed him to a 3-year contract in 2018, at an average of $28 million annually. Believe it or not, the deal made Kirk Cousins the (annually) highest-paid player in NFL history. He was even offered $30M per year by the Jets! A fourth-round draft choice in 2012, Kirk’s is a true rags to riches story.

The Vikings, in acquiring the seven-year vet in what should be his prime, paid for a top-tier, elite quarterback – one in theory capable of taking a team that already possessed one of the league’s best defenses straight to the Super Bowl.

Well, in terms of passing yards per game, at an average of 268.6 yards, the Vikings quarterback finished the 2018 season, his first in Minnesota, in 15th place among qualifying quarterbacks. That’s average. Middle of the road. Not what the Vikings expected, or paid for.

But it could have been worse. In his two games against Green Bay last year Cousins averaged – are you ready? – 383.5 passing yards. Take away those two games, and Cousins average would drop to 252.5 yards per game – in 20th place out of 38 QBs.

The Packers allowed Cousins to complete 64 of 86 passes – a stunning 74% – in last season’s games. This aided him in finishing with a completion percentage on the year of 70.1, behind only Drew Brees, who had a marvelous completion rate of 74.4 – an all-time NFL record. Take away those Packers games’ stats, and Cousins moves down to fourth place on the list.

Cousins wound up in ninth place a year ago in touchdowns thrown, with 30. But if you remove the seven TDs he threw against Green Bay, he averaged 1.64 TDs in the other 14 games, which projected through 16 games equals 26.2 TDs, and a so-so 11th place ranking.

Kirk’s passer rating in 2018 was a sound 99.7, good for tenth place among his peers. But against the Packers, his ratings were 118.8 at home in Week 2 and a superlative 129.5 in Week 12. Had it not been for the Packers’ leaky defense, Kirk’s overall passer rating would have been several spots lower on the totem pole.

Not counting the Packers games, Minnesota finishes 7-7, not 8-7-1. You get the picture.

It’s not like the Vikings’ front office didn’t have options before they went after Cousins. Do you remember the incredible situation Minnesota faced in early 2018? The Vikings had no less than three veteran NFL quarterbacks: Case Keenum, Sam Bradford, and Teddy Bridgewater – all at the same time.

On March 14, 2018, Keenum became a free agent, and that same day he signed on as the Broncos starting quarterback. It was a 2-year $36 million deal. Keenum was picked up by the Cardinals in 2018, and he’s currently the starting QB for the Redskins. He threw for 380 yards in a narrow loss to the Eagles last weekend.

Two days later, Bradford left the Vikings and signed a 2-year deal with the Cardinals, for $20 million, 15 of it guaranteed. After two blowout losses to start the year, he was replaced by rookie QB Josh Rosen. Sam was released in November, and is currently a free agent.

In the spring of 2019, Bridgewater parted ways with the Vikes. He signed a 1-year deal, at a fully-guaranteed $7.25 million, to be the backup to Drew Brees in New Orleans. 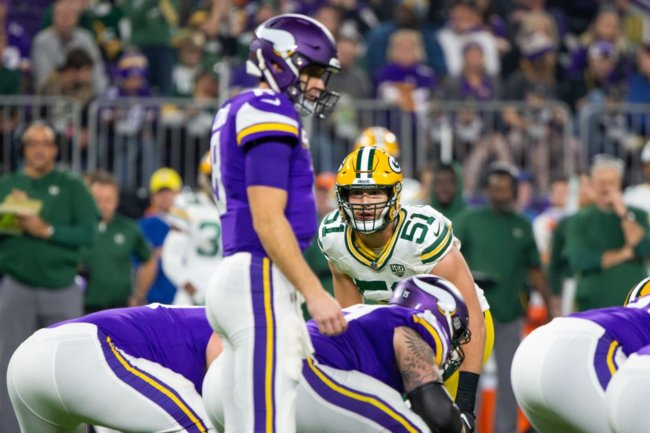 Getting back to the intriguing Sunday faceoff at Lambeau, this is the 31-year-old Cousins’ eighth year in the league. He spent the first six with the Washington Redskins. This will be his fifth year as a starter. The only time a Cousins-led team has made the playoffs was in 2015, when he and the Skins lost to the Packers, 35 to 17, in the Wild Card game.

While I’ve painted a picture of Cousins as an unexceptional quarterback, it must be admitted that Kirk was a one-man wrecking crew last season against the Green and Gold. The good news is the Packers didn’t just sit back and accept that humiliation.

First, one week after last year’s loss to Minnesota, the Packers parted ways with head coach Mike McCarthy. Second, they went looking to plug the holes in their defense – the Packers should have six new defensive starters taking the field against Cousins on Sunday. That previous defense is extinct.

I trust that the Pack will be amped up to settle the score with Cousins and the Vikings. The Packers should view this game as a huge grudge match – a chance for some sweet revenge. Last year they made Cousins look like a combination of Brees and Brady.

It appears to me that the Packers defense now has the necessary manpower to contain the Vikings pass attack – and their run game as well. Packers fans should be extra eager to see how this rivalry game unfolds.

If Aaron Rodgers were to incur a serious injury this season, the Packers ought to consider wasting no time in signing Sam Bradford up to be their temporary starter or as the backup to Tim Boyle. It’s the one hole Gutekunst left unfilled. In fact, I’d give much thought to acquiring him right now. It’s said, however, that after two ACL surgeries, he’s got a bone-on-bone knee, with no cartilage.