Last year, the Cleveland Browns sort-of got an NFL referee fired over a missed false start in a game they played against the Chargers. About a month earlier, Packers coach Mike McCarthy freaked out and screamed at the referees after Clay Matthews was flagged for roughing a passer on a call that’s considered by most to be questionable at best. These were not the first – and probably not the last – cases when the decisions of the referees were questioned. While in the case of Matthews there is more than meets the eye – what most fans and McCarthy didn’t see as a foul may count as one under the rules – there are enough cases when the cameras see one thing, the public sees another, and the referees seem to see something completely different. And not only in football – similar things happen in pretty much any team sport when certain decisions have to be made based on what the referee sees. One solution to these questionable cases comes from soccer, one of the most followed sports in the world. It is called the video assistant referee or VAR for short. 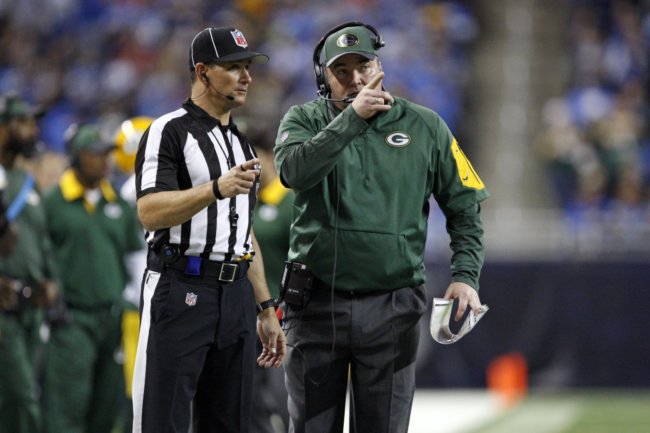 What is a VAR?

Considering that the fate of even the highest-profile soccer matches – those at the FIFA World Cup, capable of bringing fame and a small fortune to the winner – can be decided by a single goal, the decisions of the referee (especially when it comes to free kicks, penalties, and such) are vital. Referees are only human, though, and as such, they are incapable of being in every corner of the playfield to see everything. To help them avoid making mistakes that can cost soccer teams goals and maybe even titles, the Royal Netherlands Football Association (KNVB) implemented a program called “Refereeing 2.0”, which resulted in the creation of the first video assistant referee (VAR).

The system was tested during the matches of the Dutch First Division in the 2012-2013 season, and in the following year, the KNVB proposed it to the International Football Association Board, the highest governing body in soccer that decides the rules of the game. While the system did have its opponents, the IFAB approved the trials and wrote it into the Rules of the Game last year. The VAR operates under the “minimal interference, maximum benefit” principle, and is meant to provide a way to correct “clear and obvious errors” and “serious missed incidents”.

How does the VAR work?

The VAR can be used in the case of four types of decisions: Goal/No Goal, Penalty/No Penalty, direct red card (when the player is sent off the field after committing a foul) and mistaken identity of the player being shown a red or yellow card. When one of these four decisions are taken by the referee, the VAR team reviews the recordings of every incident that falls into these categories. If no mistake is identified, it is communicated to the referee. If, in turn, the recordings don’t agree with the referee’s decision, it can be overturned automatically or the game can be stopped until a more detailed review of the incident is completed.

The first major international tournament where the VAR was used in full (at every match and every venue) was the 2018 FIFA World Cup, where a total of 335 incidents were reviewed and 14 referee decisions were overturned. The system was credited with helping last year’s World Cup become the cleanest event since 1986.

Would a similar system be beneficial to the NFL? Could it make the games “cleaner”?

Previous Article
A Preview to the 2019 Season for the Green Bay Packers
Next Article
Good News: Bears Are a Play-It-Safe Team Too