Right of the bat, they riffed him for managing to injure himself playing basketball earlier this year. They covered the tough week 1 game with the Bears, his relationship with Sean McVay, his time with Tennessee Titans as offensive coordinator, team discipline, living in Green Bay, the role of the tight end position in his offense, and of course, his relationship with Aaron Rodgers. It’s worth listening to if you’re curious about LaFleur’s mindset as far as utilizing Rodgers and Green Bay’s strengths next year. You can check out the podcast here: https://www.podcastone.com/pardon-my-take

Oren Burks May Not Be Out That Long

ILB Oren Burks said he originally thought he would need to have surgery to repair an injured pectoral muscle and would be out for the year, but after consulting with a specialist it was determined it would heal on its own. Said it’s day to day and no time frame has been given.

If surgery were necessary, his season would have been instantly over. Hopefully, we’ll see him recovered within the next month or so.

Aaron Rodgers was highly complimentary of TE Robert Tonyan today in an interview with @SiriusXMNFL.

"The guy is super talented. Has incredible hands. I think he has a very bright future in this league."

"He does everything the right way."

Aaron Rodgers on getting on the same page with Marquez Valdes-Scantling: "I'm dialing in his speed. He's so damn fast."

MVS is expected to make us all proud going into his second season with the team. See Also: Did Gutekunst Get an Under-the-radar Find in Valdes-Scantling?

Rodgers also had something positive to say about CB Tony Brown

Tony is a really great part of the locker room. He’s just got a great personality and brings a great energy to our team. I give Tony a lot of credit. I think he’s continued to improve his entire time being here. What a lot of people don’t see, and I’m going to brag on Tony here for a little bit, is when I’m leaving here some nights, Tony’s still working out. He’s still doing something back in the weight room or he’s watching something. He’s always working. This guy is in here early and he leaves late – legitimately. Not like hyperbole of what it means to be a certain type of player in this league. I can vouch that Tony is usually the first one in here and one of the last to leave.

The undrafted cornerback from Alabama was added to the full roster in September of last year after a brief stint on the Los Angeles Rams practice squad and then the Packers practice squad. He has amazing speed and was also a track star in high school and when he was with Alabama. He did have some discipline issues with Bama including starting a fight that led to his suspension from the 2015 Cotton Bowl.

Rodgers Responds to Made Up Drama About Him and LaFleur:

Aaron Rodgers on Matt LaFleur: “I don’t need to go out there and prove to everybody how great Matt and I are getting along… look, we’re having a great time and we’re communicating. The conjecture is for clickbait news stories that you guys can put on your websites.”

It’s way too early to be making judgement calls about the Rodgers/LaFleur relationship but that does not stop some sites from speculating for that sweet Rodgers drama traffic boost.

The Stache is Back 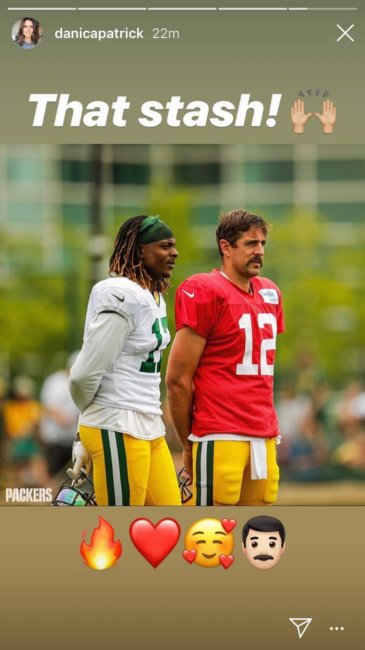 Well, Danica likes it. They probably do Smokey and the Bandit roleplay all the time.

From @NFLTotalAccess: #Packers QB Aaron Rodgers will play a quarter or so against the #Ravens, his debut in coach Matt LaFleur’s offense. A look at how that’s going 👇🏽 pic.twitter.com/IDthg0u2S8

Plenty of chatter around these parts about Rodgers’ distaste for preseason football and some speculation as to how much play time he will get with the new offense for the Big Bears Game™.

The Packers have waived CB Derrick Jones, who was claimed off waivers from the Jets on Sunday, because of a failed physical, per a source.

Easy come, easy go. Jones just wasn’t up to the physical standards of the team. Jones played for Ole Miss and was a sixth-round pick for the Jets in 2017 and has only played in four NFL games.

Packers picked up Bohanon to boost their roster in the Fullback position. There are many indications that this will be a very important position for coach LaFleur’s and OC Hackett’s offense this year. Coming from Wake Forrest, Bohanon was drafted in 2013 during the 7th round by the Jets.

I had a sweet ride to practice https://t.co/Av5QWTjYPx

Here are some key takeaways from Gutekunst’s words with the media(Source – 2pt_perversion on Reddit):