Five-time Pro Bowl tight end Jimmy Graham wasn’t immune to criticism last season and knows he and the team can do better moving forward. Graham, who found the end zone ten times in 2017 with the Seahawks and 69 times over his first eight seasons, scored just two touchdowns last season. He caught just 55 passes, his lowest for a full season since his rookie season (he caught 48 in 11 games in 2015 in his first season with Seattle). Graham is hoping and also confident he and the offense will turn things around this season under new head coach Matt LaFleur. To be fair, there is more a chance this upcoming season of him actually getting his hands on the ball with the likely upcoming offense personnel changes.

Although not one to often talk to the media, Graham opened up at his charity cornhole tournament about the previous season, his goals moving forward, and why he’s still playing the game going into his 10th NFL season. Graham noted that last season was definitely a disappointing one for the entire organization. Personally, he knows last season was bad and needs to focus on being the big red zone threat he has always been throughout his career. 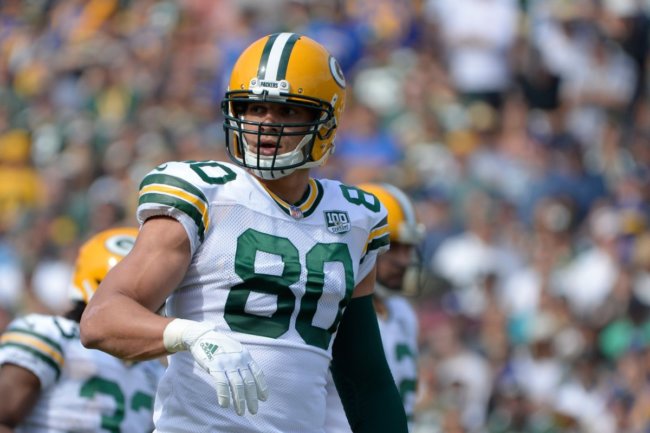 Critics may be whispering about Graham being on the downside of an excellent career, which motivates him more to be the best he can be. The quickness Graham displayed during his prime is now in question, but he knows he can still run and cause mismatch problems for the opposition. Graham also knows that run blocking will likely be at the forefront in LaFleur’s offensive scheme.

Graham will get some competition at the position, as the Packers drafted Jace Sternberger out of Texas A&M in the third round. At 6′ 4″ and 250 pounds, Sternberger is a big target who showed the ability to stretch the field, despite a relatively mediocre time in the 40. He joins 35-year old veteran Marcedes Lewis and Robert Tonyan, along with Graham to form a solid group at the position.

The ultimate goal is getting the Super Bowl ring. Graham insists he will keep playing and is determined to make that happen. Once that does happen, he’ll figure out his next step, whether to play or retire. For the Packers and all of their fans, let’s hope that decision has to come at the conclusion of this coming season.