by Jason Parker
in News and Rumors
16

Per Rob Demovsky of ESPN, Josh Jones is asking the Packers to be traded.

Josh Jones, a second-round pick just two years ago, is skipping the Packers’ OTAs because he’s hoping to force a trade, a source told ESPN.

Jones has been working out in Florida with a trainer after he left the Packers’ offseason program about a month ago.

The source said Jones, who was the 61st overall pick in the 2017 draft, believes it would be best for both him and the Packers if they parted ways.

Packers safety Josh Jones is skipping the voluntary OTAs and working out in Florida because he’s hoping to be traded, a source told ESPN. The source said the 2017 second-round pick believes it would be best for both parties if they parted ways. Story coming on ESPN shortly.

Bill Barnwell of ESPN wrote in early May that Josh Jones was the most likely player to be traded away:

The 2017 second-round pick has to be on notice after this offseason. Brian Gutekunst signed Adrian Amos from the Bears in free agency to take over at one safety spot and moved up to draft Darnell Savage Jr. with the 21st pick in the first round. Jones could figure as a third safety, but the Packers might prefer Tramon Williams in that role. The Packers could look to move Jones to a team looking for help against the run.

As Ed wrote yesterday, off-season moves by the Packers have put more pressure and competition between players on the safety position for next season. While Jones initially reported to workouts, Demovsky says that ESPN’s source indicated that he was been pushing for a trade for a while already.

I don’t particularly want to see him go, but professionally, his position on this issue makes a lot of sense. He is still young with plenty of untapped potential so he obviously wants to play with a team that can help him realize that potential. He hasn’t been with the team long enough yet to really have deep roots so he needs to look out for himself. Of course, he has already made his mark on the team by having two sacks in a game by a rookie defensive back.

Jones has expressed his frustration in the past with his role on the team. Once you factor in the Packers’ off-season moves with Amos and Savage, this seemed inevitable:

#Packers S @JoshJones11_ sounds a little miffed by his lack of playing time on #ClubhouseLive “You ain’t going to take a player in the 2nd round to not contribute to the team.” pic.twitter.com/8BmorzNxaK

Someone on Twitter posted a screenshot of this exchange with Jones back in March: 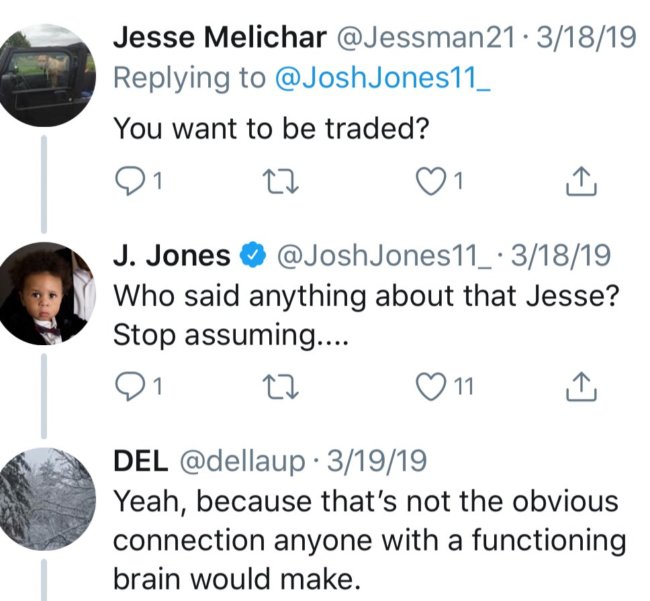