#12 draft pick Rashan Gary has officially signed with the team. While primarily a DT in college with Michigan, Gary was drafted in the first round by the Packers as an edge rusher. Edge rushers is something the team really needed sooner than later but this pick will take some time to bear fruit.

Fun Fact: to the best of my knowledge, Rashan Gary is acting as his own agent.

Certified agent Ian Clarke will negotiate Gary’s contract and will be paid as an employee of the agency instead of getting a percentage.

“I don’t think this has ever happened,” said Gil Brandt, the NFL’s top draft consultant and a former personnel director for the Dallas Cowboys. “Everybody has a new, creative idea and this is the latest one. 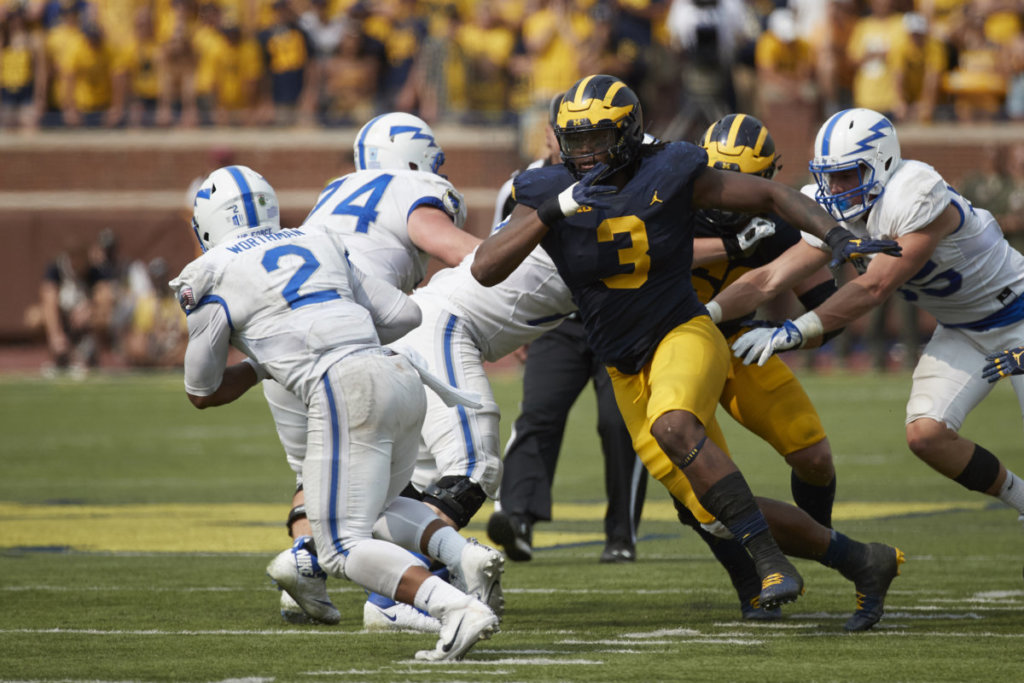 In related news, Gary was seen practicing with a shoulder harness that was similar to what he wore previously with Michigan. “Pro Football Doc” writes that it is likely Gary will need surgery:

Rashan Gary (defensive end, Michigan) has a shoulder issue, but information has been sketchy. Other than an announcement once from his mom, not much has been released. Gary was reported to have undergone shoulder surgery last year and missed some time in the 2018 campaign. Some teams have medical red flags, according to Jason LaConfora. This is a case where Gary’s Combine medical exam will be all-important. Despite a report of some teams downgrading Gary, I don’t see how any shoulder injury he has would keep him from being drafted, though where he will be selected is the question.

It is possible to play with the injury as Demarcus Lawrence did. However, surgery is eventually needed. Playing with a harness is never 100 percent effective and not sustainable for very long. Ezekial Ansah’s 2018 season with the Lions was marred by a labral tear. Shaq Lawson was drafted in the first round of 2016 by the Bills with a similar issue, aggravated the injury immediately in workouts with Buffalo, had surgery and started his rookie season on PUP. This will affect Gary’s draft status. How much depends on the size, location and exam of his labral tear.

Rashan Gary is practicing with a harness on his right shoulder. Tough to see it from distance. pic.twitter.com/cgOEdX3mSp

Pro Football Doc goes to mention that the injury is not necessarily detrimental to his performance:

In no way am I panning the pick. He played with the labral tear and did well in college. Others in the NFL have played with this injury using a brace/harness. That includes the Cowboys DeMarcus Lawrence. However, others, such as the Lions’ Ezekial Ansah last season, have struggled with it.

This all could just be a precaution by the team. Perhaps someone with more sports medicine knowledge than myself can enlighten us in the comments. As of right now, it seems our new project has a personal injury side project going on. This is nothing new as it was reported that Gary’s shoulder was flagged just prior to the draft:

#Michigan DT Rashan Gary, one of the draft’s top defensive players, has a shoulder that was flagged, sources say. It’s a labral tear from college, and most believe he can play this season, then possibly have surgery afterward. It will likely have to be managed or harnessed, tho

The bottom line is do not expect much productivity from this #12 pick any time soon.

Rashan Gary was one of the highest-rated players coming out of Paramus Catholic High in NJ and did nothing at Michigan to live up to it. Also has the labrum issue. Good luck, Packers.

To that, there is often this counter-argument:

#Packers fans. Want to know why Rashan Gary wasn’t super productive in college? He saw double and triple teams like this ALL THE TIME. @1057FMTheFan pic.twitter.com/yxFyfNTSFj

For better or worse, he is ours for 4 years + option(actual terms were not disclosed).

Previous Article
Brian Gutekunst Gets the Last Word on Packers’ Receivers
Next Article
Will Opposing Quarterbacks Start to Dread Playing the Packers?