Previously, I nominated safety Josh Jones as my pick for the Packers’ Breakout Performer of 2019. However, there are a number of his teammates who might surpass him. I’m hoping to see at least two of the below players step up in a major way from their 2018 statistics. 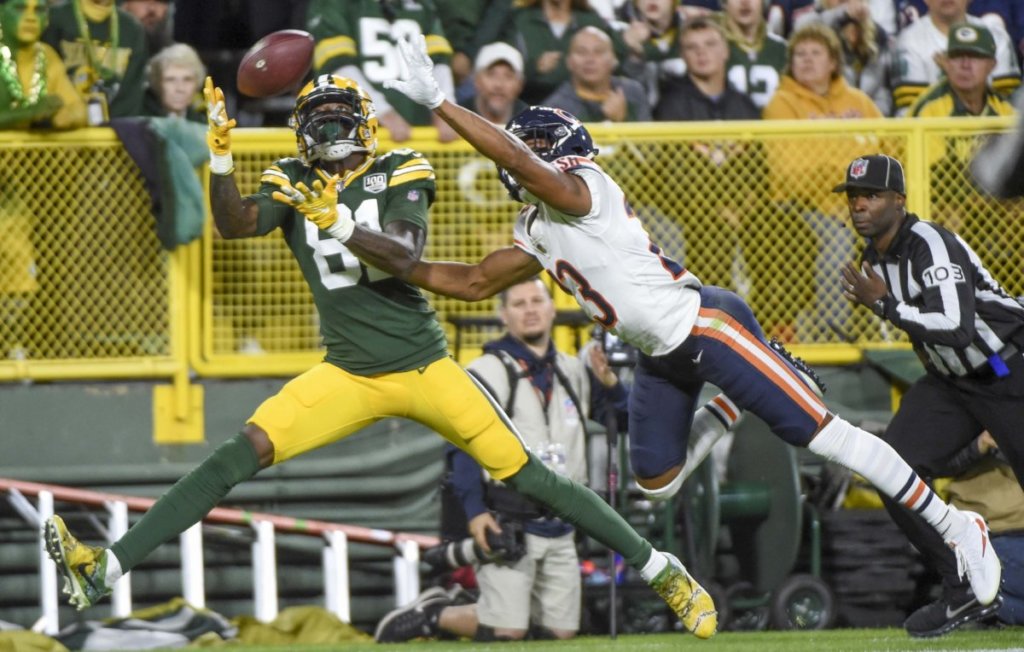 Allison joined the Packers as a free agent in 2016, and finished with 12 catches for 202 yards and two TDs. In 2017 he got about the same amount of playing time (he started two games each year) but did much the same: 23 catches, 253 yards no TDs.

In just 5 games in 2018, he seemed on the verge of breaking out, but his season ended after only five games with these totals: 20 catches for 303 yards and 2 TDs. He had a concussion in Game 4, but it was a groin injury shortly thereafter that led to surgery and to being placed on injured reserve.

Despite his underwhelming speed (4.67 dash time) Allison has proved to be a deep threat: in 2016 he averaged 16.8 yards per catch, and he had a 15.2 rate in 2018. G-Mo has proved to be an elusive player after making a catch. Facing a roster decision, the Packers recently elected to sign Allison to a one-deal for $2.8 million. I’d call that a bit generous, but also a sign that the front office thinks he has too much potential to allow other teams to snatch him away. Geronimo played only two collegiate seasons, at Illinois, so at age 25 he’s probably still got a lot of development remaining to be done.

Perhaps the best reason for optimism for Geronimo is simply that Aaron Rodgers likes to throw his way. As of now, Geronimo is solidly planted as one of the Packers’ three starting wide receivers. If he stays relatively healthy, I would think a 50-catch, 700-yard, 6 TD season would be satisfactory – whether or not that constitutes a breakout year for him. 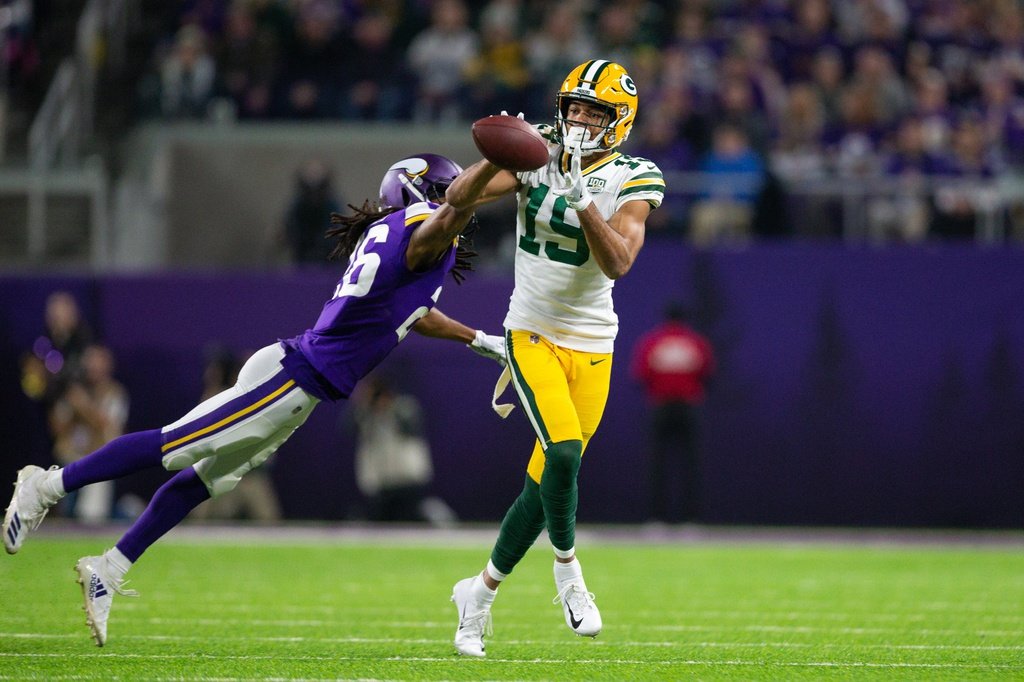 Though Marquez Valdes-Scantling got more playing time and starts (10) in 2018, “EQ” emerged as the favored starter by season’s end – and he is ahead of MVS on Our Lads’ depth chart. The line on EQ was 7 starts, 21 catches, 328 yards, no TDs, while MVS recorded 10 starts, 38 catches, 531 yards, and 2 TDs. Either could be viewed as a likely breakout receiver, but 5th rounder EQ outpaced his 6th-round teammate in the coaches’ eyes as the season wore on. One thing that separated the two similarly-sized receivers was the catch rate: EQ caught 58% of the passes thrown his way – not impressive, but considerably better than MVS’s 52%. They each had yards per reception in the 15’s.

By comparison, Jordy Nelson finished with a career catch percentage of 66.3, and in his final year, with the Raiders, he had a 71.6% catch rate – ruminate on that.

EQ, after three years at Notre Dame, perhaps declared for the draft too early. Though only moderately speedy (4.48 dash time) he has used his 6’5” height and other above-average size dimensions to good advantage. Only 22, he can build off the 358 snaps he managed to get in 2018. Many TP readers seem to think the Packers are well stocked with these two tall late-round draft choices. I don’t agree with that optimistic view, but it appears that one of the starting receiver jobs is St. Brown’s to lose. Packers fans must hope he’ll bust out in his second pro season. If he (or Geronimo) doesn’t, defenses will likely routinely double-team Davante Adams, which would wreak havoc on the Pack’s passing game. 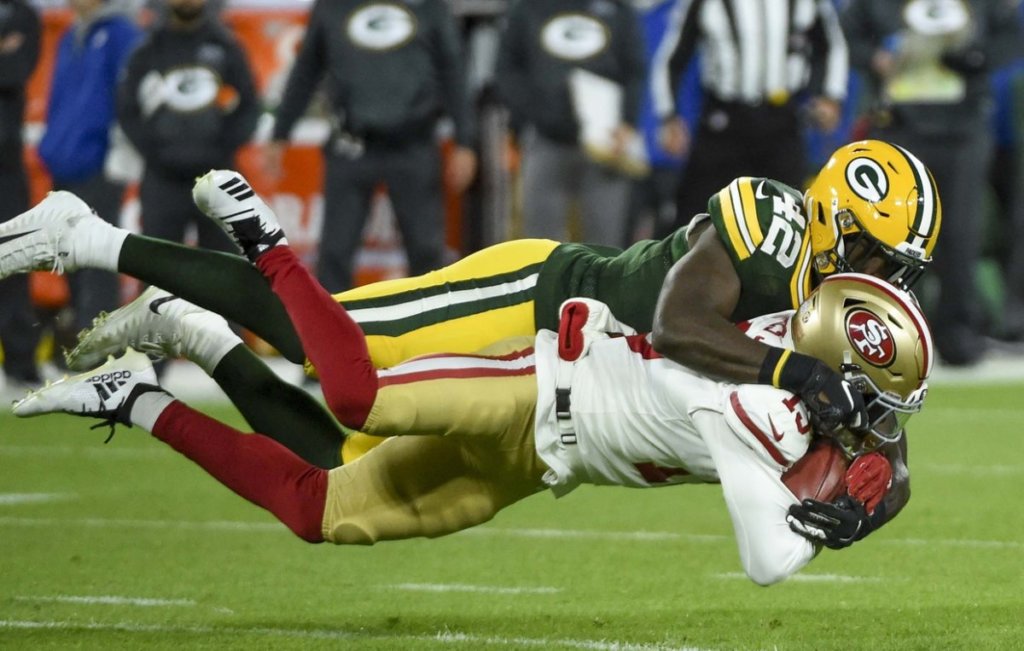 Of Brian Gutekust’s draft selections in his first year as Green Bay’s general manager, the only surprise pick was the lightweight (233 pounds), but quick, linebacker out of Vanderbilt. The 24-year-old is that increasingly rare player who has four years of college under his belt. After several head-turning moments in the preseason, his highest playing time came in Games 4, 5, and 6, when he took 20, 25, and 28 defensive snaps. He then hit a wall. In the team’s final eight games, he was in on only 18 defensive snaps – virtually benched. Can’t sugar-coat it: Burks was a disappointment as a rookie, with four starts, 23 tackles, and no difference-making stats or moments.

We know from his preseason film that the potential is there – as you’d hope to see in a third-round draft pick. In January, the Packers’ Mike Spofford interviewed him and got this quote:

“I know what type of ball I’m capable of playing, and I’m feeling like I didn’t live up to my own expectations. I’m hungry to get back after it, to prove to myself, prove to the team, my worth.”

As I recall, the biggest complaint about Burks was his inability to shed or avoid the blocks of bigger players.

There’s considerable speculation that Burks’ troubles have revealed a lack of depth at inside linebacker that the Packers might try to fill with a high draft choice. If so, Burks will have to first beat out a rookie to win the preseason battle for the starting spot alongside ILB Blake Martinez. Gutekunst thought Burks was a hidden gem in the 2018 draft, but that gem still needs a lot of polishing.