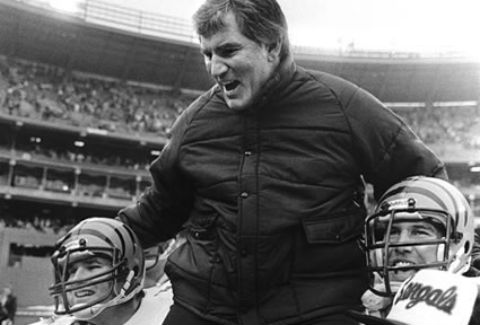 At the age of 85, former Packers offensive lineman, Forrest Gregg, has passed away Friday from complications with Parkinson’s disease. Gregg played in 188 NFL games consecutively which led to him having the nickname “Iron Man”. At the time, this consecutive streak was a record. In his book, Run to Daylight, Vince Lombardi said, ‘Forrest Gregg is the finest player I ever coached!’.

Gregg took over as Packer’s head coach in 1984 after Bart Starr’s nine-year run. As older fans remember, this was not a lucrative period for the team when it came to winning and making the playoffs. It is also one of those rare periods when the Chicago Bears did not suck. Mike Ditka was in command and times were tough in the NFC Central. There was also the Tampa Bay Buccaneers fifth wheel at the time.

I’d like to extend my deepest sympathies to the family of a true Packers legend, Forrest Gregg. This picture has been hanging in my home office for the last 10 years and serves as a great reminder of what a tough competitor Forrest was. #Packers #GoPackGo pic.twitter.com/4TRXhvjcNX

Once again, there is a death of a long-time player in the NFL from cognitive impairment mostly likely linked to years of head injuries. In their reporting of the death, ESPN notes that he never blamed his disease on the sport or participated in league concussion lawsuits:

“I’m overwhelmed at the amount of people that loved Forrest, of the number of players that said he made men out of them,” she said. “Forrest loved people. He loved everybody. He loved his children. He loved me. And it just broke my heart. My heart is broken.”

She said the funeral will be sometime next week in Colorado Springs and open to the public.

His family and his neurologist said Parkinson’s disease may have been related to numerous concussions he suffered during his playing career, but Gregg never blamed football for his health ailments. He refused to join concussion lawsuits against the NFL and said he still would have chosen to play the sport if he’d known there would be a hefty price to pay later in life.

Adam Schefter of ESPN reports that former Packers RB Ty Montgomery has signed a one-year deal with the New York Jets to help add some depth. Montgomery will be backing up the very talented Le’Veon Bell who had rejected the franchise tag from the Pittsburgh Steelers and missed the 2018 season as a result of the shrewd negotiations.

Jets are signing former Packers’ RB Ty Montgomery to a one-year deal, per source. Montgomery expected to be the back to Le’Veon Bell.

Katie George caught up with Aaron Rodgers and got his take on the Milwaukee Bucks:

It was pretty cool catching up with the @StateFarm guy… pic.twitter.com/1j94SdB2Ba

This is coming off recent confirmation that Rodgers was playing with a tibial plateau fracture and a sprained medial collateral ligament in his left knee last season.

Rodgers describes the injury on the Wilde and Tausch Show:

If you watch the hit back, just my two bones that come together on the outside just kind of made an indent fracture. Very painful. The good thing was it’s not super weight bearing, load bearing every single time, but there’s definitely some movements and things you do naturally that affected it.

[…]The MCL was frustrating as well because it did start to get better and then Christian Jones tackled me on the sideline in Detroit early in the game and it basically reset the whole thing. I don’t feel like after the first quarter of the season, the first game, I really wasn’t 100 percent the entire year. That’s not an excuse for the way I played or didn’t play, but it limited my mobility for a good part of the season.

[…]But it is nice to be sitting here — you know the offseason on your body, especially as an older player, it’s great. I feel great. My legs feel good. My feet feel good.