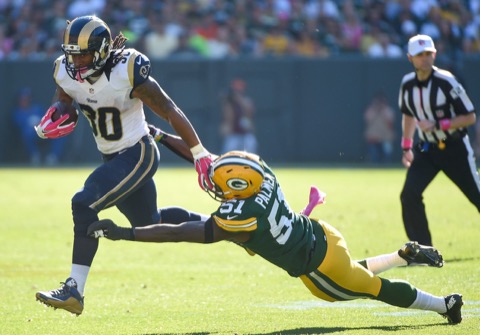 In a post of 2/4, I theorized about the ineffectiveness of the Rams’ superstar running back Todd Gurley in the team’s run at the Super Bowl. Though Gurley insisted his knee was okay, I concluded that despite not showing an obvious limp, he must have had a troublesome knee condition.

It turns out that the knee was a mess after the Rams’ first game of 2018. “It was bad,” Gurley said. “I was contemplating on giving the Rams back their money and everything. It was bad. It was real bad.” He apparently never gave the knee proper rest, to the point that he finally sat out the final two games of the regular season game. Then versus New Orleans in the playoffs he was only given four carries. Though I don’t know why, to this day both Gurley and Coach Sean McVay insist Gurley was healthy. The circumstances indicate otherwise, however.

On February 20, a report via USA Today quoted Gurley’s fellow running back, C.J. Anderson, as saying: “He was more hurt than what we thought. The injury was a little bit more than what everybody in the building thought, including himself.”

This still sounds like a vast understatement. Gurley would be about the unlikeliest player in the league to play a minimal role in a Super Bowl, or to be a non-factor when he was in there, unless he had a serious physical condition.

Just days ago, Gurley indicated his knee was “fantastic,” so it appears that surgery will not be needed in the offseason.

While it might seem noble to refuse to use an injury as an excuse, the NFL has rules requiring accurate reporting of injuries. One big reason is so that injuries are known at the time gamblers make bets on games. The Super Bowl is one of the most highly wagered events there is, so I’m guessing some high-stakes gamblers who bet on the Rams aren’t happy about how this all went down.

In my post of 2/20, I theorized that there was more to the mid-season trade of safety Ha Ha Clinton-Dix and the abrupt release of safety Jermaine Whitehead than anyone was saying. Among the theories I offered was that they might have locked horns with their coaches, they might be sowing discord among their teammates, or that it could have been an overreaction on the part of the Packers’ front office.

The post drew a lot of attention. Some of you might have not have seen the comment by frequent TP contributor “Howard” that “Whitehead was suspended from his college team for abusing a coach(s?).” Howard further indicated that at the conclusion of his college career (at Auburn) at least one scout thought Whitehead was undraftable due to “character problems”.

If so, then it’s a reasonable deduction that Jermaine didn’t take kindly to being lectured or reprimanded over his untimely penalty, and reacted in such a way the Packers had little choice but to release him.

While I think the Packers should be as transparent as possible about issues that affect the team, I also understand that it is also generally unwise to air one’s dirty laundry in public – in fact, that can lead to defamation lawsuits (even if unmerited). Faced with questions by the press, GM Brian Gutekunst responded that “performance is the first consideration, though everything is taken into account.”

I personally would have preferred letting it go at: “the action we took was based on both on-field and off-field circumstances.” Either way, I’m going to trust that the Packers did the right thing regarding Whitehead – even though ridding the team of him (and Ha Ha) left the Pack with a dire shortage of defensive backs.

I wonder, though, if the coaches and/or front office might have inadequately responded to prior incidences of insubordination in the past – and this emboldened Whitehead to think he could behave as he wanted, with impunity?

TP reported on 2/22 that Patriots’ owner Robert Kraft has been charged with misdemeanor solicitation of prostitution, relating to a health spa in Jupiter, Florida that allegedly was a front for sex trafficking. The police reportedly have the goods on over 200 of the “johns,” including lots of video tape.

According to an article in the Orlando Sentinel, a former prosecutor indicated that most people so charged are allowed to enter a diversion program, perform 100 hours of community service, and attend a course on the harmful effects of prostitution and sex trafficking.

Kraft might also be in trouble with the NFL. That same article says that players, owners, coaches and other team employees can be punished, under an NFL policy prohibiting “conduct detrimental to the integrity of and public confidence in” the NFL.

Typically, the NFL says it is aware of the matter and is monitoring developments.

Kraft’s attorneys might face an uphill battle. The Washington Post has reported that the police say Kraft was twice videotaped engaging in a sex act with an employee of Orchids of Asia Day Spa. And here I thought people went to Florida for the sunshine.

While it’s normally players, not executives, that run afoul of this policy, there’s a precedent concerning Colts owner Jim Irsay, who in 2014 pled guilty to a misdemeanor count of operating a vehicle while intoxicated. The league then suspended him for six games and fined him $500,000.

How would your typical multi-billionaire respond to being accused of getting caught with his pants down? Correct, he is denying committing any illegal activities – and probably assembling the best legal team money can buy.

We’ll see how it goes. And by the way, the photo TP posted came with a caption indicating the babe, Ricki Noel Lander, is Kraft’s wife. Not so, though apparently a very good friend. Wikipedia says the 77-year-old Patriots’ owner has been a widower since his wife of close to 50 years died in 2011.