Is Clay Matthews’ Departure Not So Foregone a Conclusion?

by Rob Born
in Articles & Analysis
17

OLB Clay Matthews and Nick Perry seemingly were in identical straits when the free agency stampede approached. Each had been vastly overpaid compared to their work product in 2018, and each’s long-term contract was up. The Packers had their two replacements ready to be signed to long-term deals. Perry was released on March 12. Clay wasn’t. What should we make of this?

Beyond any question, Clay isn’t going to be paid the more than $10 million he’s become accustomed to getting. It‘s doubtful that more than a couple of the other 31 teams would court him at any price. His body has become ever more brittle over ten grueling seasons. He’s viewed as damaged goods.

But could he still have a future in Green Bay? I’d say that depends on whether Clay still wants to play in the NFL. If so, he needs to swallow his pride, take a one-year prove-it deal, and maybe even accept a backup role in the team’s linebacker corps. Mike Pettine also must be on board for this to happen.

In favor of such an arrangement, in the past three years Clay has played a substantial amount of time as an inside linebacker – at this stage, he performs better in the middle than on the edge – he’s a capable run-stopper. DC Mike Pettine likes to mix things up, and Clay could provide him with lots of options.

With Clay, all many of us do is count his annual sacks: 6.5, 5, 7.5, and 3.5 most recently. It’s undeniable that his numbers are down across the board, but they tend to be in relation to how often he gets on the field. And if we’re just counting sacks, the 20% or so of the time he’s been playing on the inside have also diminished those numbers.

Should Gutekunst and his mates have any inclination to retain Clay, he could start alongside Martinez at ILB. He could also be a backup and relief man for all four linebacker spots. If he isn’t up to the task, it doesn’t leave the team in a hole – there’s Kyler Fackrell, Oren Burks, and possibly Jake Ryan (remember him?) available – though if Clay stays the team would likely part ways with Ryan, who makes Clay look like a picture of health. 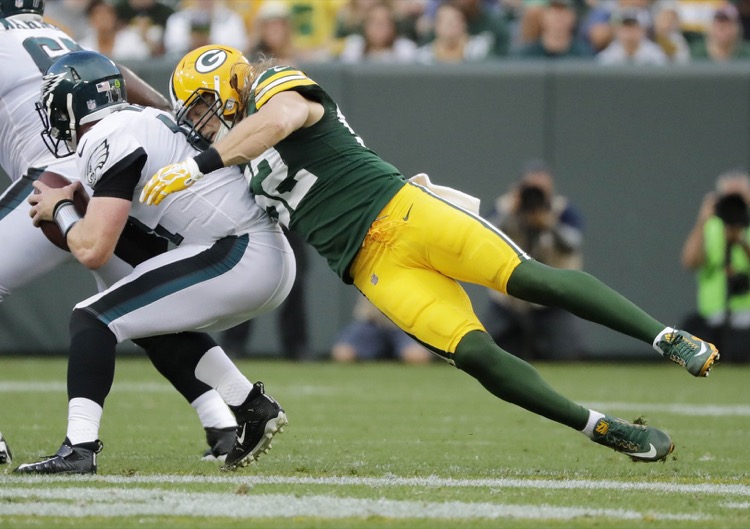 Clay certainly doesn’t need the money. I’d love to know how much he makes from commercials alone. If he has any future left, Green Bay is probably the best spot for him – just ask Jordy. Or ask Morgan Burnett, who in January begged the Steelers to release him from the last two years of his 3-year deal.

We’ve watched Clay over the years go from an ego-driven stallion to a self-deprecating guy. In commercials, he’s Gabby Hayes, the clumsy sidekick to Aaron Rodgers. I recall one post-game interview last year in which he was asked about the refs nullifying a couple of his sacks by calling penalties on him, and he good-humoredly responded that there messing with the numbers that have kept him in the league.

Clay and the Packers have had a mutually beneficial relationship for most of the past ten years. He’s only 32. How about crossing fingers that Clay stays in decent health, and offering him one more year at $4-5 million?

How Will Billy Turner Fit Into Packers’ Offense?