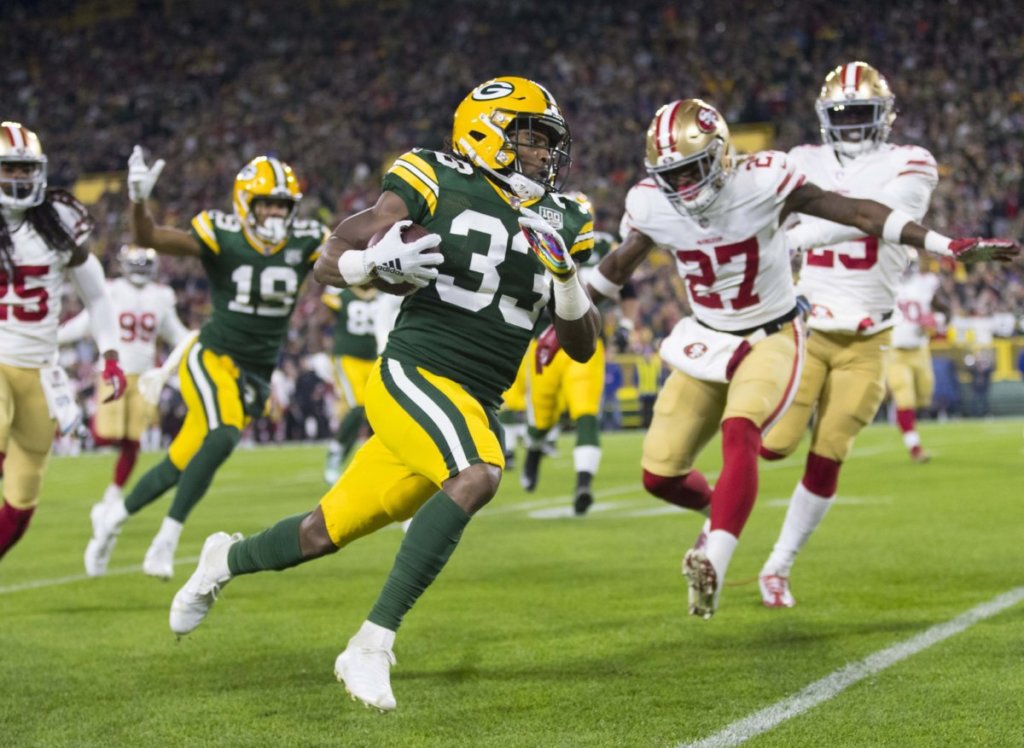 Aaron Jones (33) rushes with the football during the first quarter against the San Francisco 49ers at Lambeau Field. Jeff Hanisch-USA TODAY Sports

Every follower of the Packers knows that Aaron Jones was under-utilized by Coach McCarthy for his first two years as a pro.

Rather than just talk in generalities about correcting this in 2019, I’d like to suggest a couple of benchmarks. Aaron should average at least 18 carries, and catch at least four passes per game in 2019. I’m being conservative – if some of you feel that should be bumped up to 20 carries and five catches, that’s fine with me too. Either way, that means getting Aaron around 25 touches per game.

How realistic are these benchmarks? If you consider Aaron to be one of the finest and most versatile running backs in the league, it would be utterly foolish to use him less often.

Let’s take a look at how much some other top RBs in the league were used in 2019.

Ezekiel Elliott: As expected, the big third-year road grader rambled for 1,434 yards in 304 rushes, with 6 going for touchdowns. Unexpectedly, he also had 77 catches out of 95 throws, for 6 more TDs; I say unexpectedly, because in his first two years he was not targeted more than 39 times. His total yards from scrimmage: 2,001.

Christian McCaffrey: Healthy all year, the second-year pro rushed 219 times, and was thrown to 124 times, catching 107 – that’s a great 86.3 catch percentage. He had 9 rushing TDs and 6 more through the air. Total yards from scrimmage: 1,965.

Great double-threat running backs don’t need to be developed. As Giants’ rookie Saquon Barkley showed, they enter the league ready to ramble. Kamara, McCaffrey, and Mixon (and Jones) are two-year pros, Elliott is a third-year guy, and Gurley just finished his fourth year.

Of RBs with the most carries in 2018, Elliott was first by a mile, Barkley was next, Gurley was 4th, Mixon 8th, McCaffrey 10th, and Kamara (limited by injuries) was 16th.

These stars are incredibly young. Barkley, McCaffrey, and Mixon are 22; Elliott and Kamara are 23; Gurley is 24 – as is Aaron Jones.

Of the six highlighted running backs, how did their teams do on the year?

The Chiefs finished first in points scored. Their running back, Kareem Hunt, was not included in this post, since he was released by his team after 11 games due to not being truthful about an incident of an assault on a woman.

How do the above suggested benchmarks look now? By the way, I heard a TV commentator mention at or near the end of the regular season, that of running backs with more than 200 carries, Aaron Jones and his career mark of 5.5 yards per carry ranks first – in the history of the NFL!