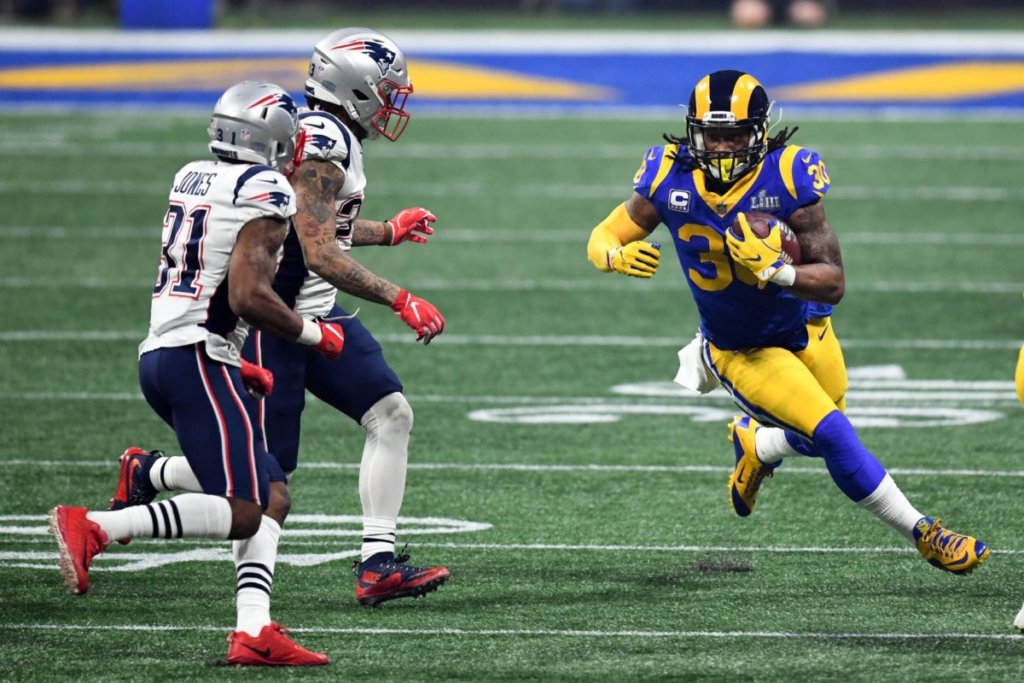 With only 16 points put up, Super Bowl LIII wasn’t much of a game to watch. Nor was the game as close as the score might suggest.

The Patriots, in outgaining the Rams 407 yards to 260, dominated nearly every statistical category. The big difference, though, was in the ground game comparisons: the Pats ran 32 times for 154 yards, while the Rams gained only 62 yards in 18 plays.

Going into the postseason, some thought Todd Gurley should be voted the league’s MVP. Over 16 games, he had the third most rushing yards (1,251), the second most first downs (70), the most touchdowns (17), a 4.9 yards per carry average, and almost 90 rushing yards per game.

The Pats held Gurley to 35 yards in ten carries; he only had one decent run, for 16 yards, and he lost a yard on his one catch.

Gurley’s numbers were fine in the divisional playoff game, but against the Saints two weeks ago he had only four carries for ten yards. Coach McVay assumed the blame for going too much with C.J. Anderson, but he obviously was trying to mask an injury to his prized back. The two week break didn’t bring any improvement.

Though Gurley had no apparent limp, he’s likely dealing with a bad knee. Following his first game of the season, Gurley was listed as having strained his left knee – the “inflammation” persisted throughout most of the season.

Though Gurley rushed for 115 yards in only 16 tries against the Cowboys on January 12, it’s likely he exacerbated the condition in this game. On the Rams crucial final 12-play touchdown drive, Gurley had but one carry for a yard, while C.J. Anderson had five carries, and the wide receivers contributed two more rushes. Anderson had been unemployed, and didn’t even join the team, until mid-December.

The Rams have relied upon a balanced ground and passing attack all year. But not on Sunday.

Without production from Gurley, QB Jared Goff was a bone to be chewed by the playoff-savvy New England defense. Goff was sacked four times, and he was constantly pressured. Led by three hits each by Dont’a Hightower and Kyle Van Noy, Goff suffered 12 QB hits in the game. Brady was only sacked once, and only hit three other times. Once again, the sacks and hits differentials were greatly in favor of the winning team.

Goff was certainly the iffiest of the four quarterbacks in the conference finals. Whenever Goff has to work in a compressed pocket, it’s a problem. This weak link completely broke without the support and cover provided by the Rams’ customarily strong run game.

This in turn resulted in a piss-poor spectacle for viewers.

Even after the disappointing game, Gurley insisted that his knee was fine. He’s a guy who tows the line that injuries are no excuse. I suspect, however, that the truth will emerge in the coming days.

Previous Article
Rob’s Reasons for Optimism
Next Article
Josh McDaniels And The Green Bay Packers: Marriage Made In Heaven?