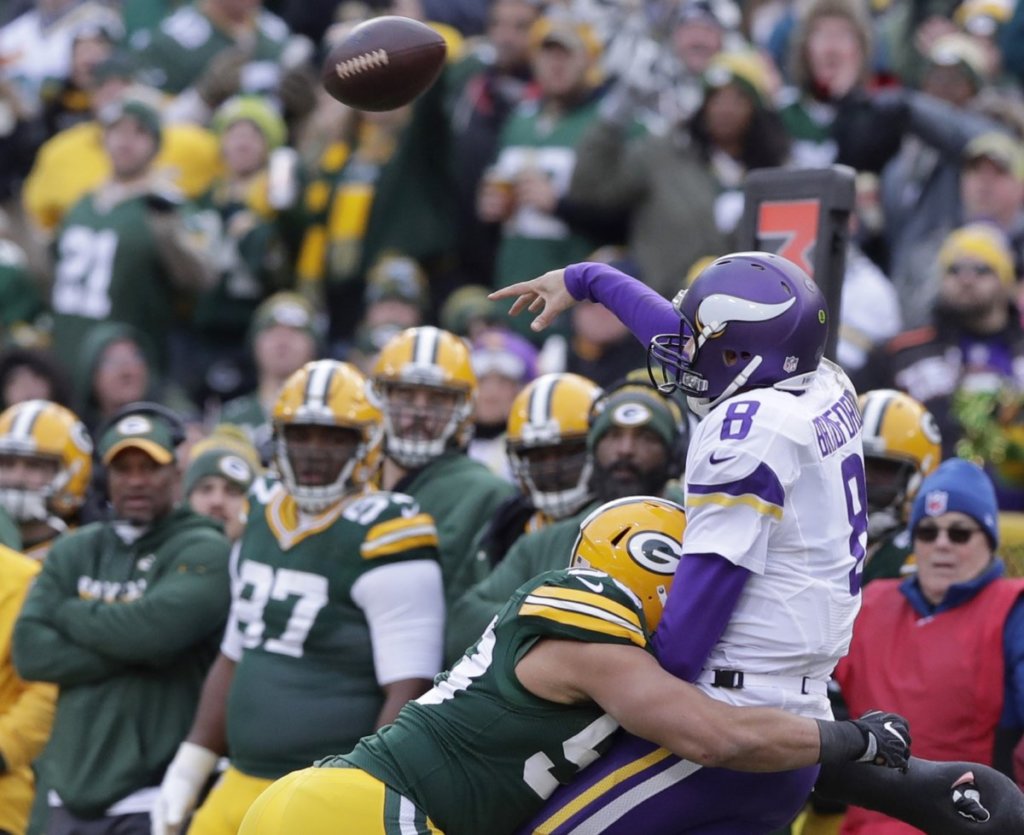 I don’t think it’s even arguable: over the past few years the Packers have not prioritized drafting players who might fill its most urgent needs. It’s a particularly grave mistake if the hole to be filled is on defense. If you’ve got no quality tight ends, for instance, you can choose not to throw to the tight end very often, whereas if you got a weak cornerback, the other team can focus it’s whole offensive game plan on exploiting that deficiency.

Here’s what’s so peculiar: over that last three years at least – and with two different general managers: the Packers have made almost no serious efforts to fill two of its most pressing needs.

The selection of Davante Adams in Round 2 in 2014 has worked out nicely, though it took three years for a return on this investment. By the end of the 2015 season, however, the Packers, who for years had three capable wide receivers, had an obvious weakness at the position: Randall Cobb went from 1,287 to 829 yards gained, and his number of injuries escalated. And James Jones, who led the team in yardage in 2015, was let go.

So what did the Packers do in the 2016 draft? They brought in Trevor Davis, who never showed much promise, in the sixth round.

Though Jordy returned strongly from his ACL injury in 2016, Cobb’s decline worsened – his yardage dropped to 610 on the year. Additionally, Ty Montgomery, a third-round pick in 2015, was moved from receiver to a running back.

What did Green Bay do in the Spring of 2017? They drafted DeAngelo Yancey in Round 5.and Malachi Dupre in Round 7.

Things only worsened during the 2017 season. Jordy Nelson slumped to 53 catches and 482 receiving yards. Cobb went through his third consecutive subpar season: 66 catches, for only 653 yards and four TDs.

Even if you thought Jordy would bounce back, wasn’t it obvious that Packers receivers were getting long in the tooth: 2018 would be Jordy’s 11th season (counting the lost 2015 campaign), and Cobb’s 8th. Shouldn’t they have been looking for a high-quality receiver with the next five or so seasons in mind?

What did the Packers’ front office do prior to the 2018 season. First, they let Jordy go. Then they chose quantity over quality. The Pack waited until late in the fourth round (pick # 133 overall), to select WR J’Mon Moore. Not satisfied, they selected two more big and fast, though not highly rated, receivers in rounds five and six. It was a foregone conclusion that these guys were going to take years to develop. 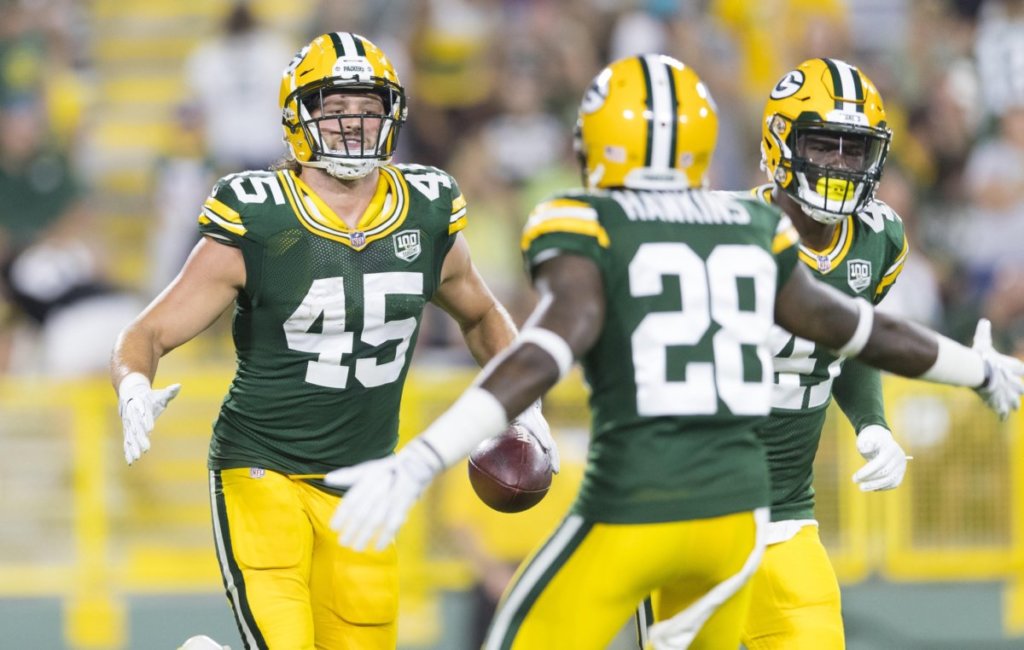 Vince Biegel (45) celebrates after recovering a fumble during the fourth quarter against the Tennessee Titans at Lambeau Field. Jeff Hanisch-USA TODAY Sports

We’ve known that Clay Matthews hasn’t had a good sack season since he had 11 in 2014. We also have known for that length of time that he’s been injury-prone. In addition, the other starter on the edge, Nick Perry has had only one season in seven years with over seven sacks – and Nick is even more susceptible to injury than Clay. That’s one, or even two, gaping holes at one of the most important positions on the team.

So what has the Ted Thompson group, and the Brian Gutekunst group last year, done to fill these holes?

In 2015, the closest they came was drafting defensive end Christian Ringo in Round 6.

In 2016, they went with OLB Kyler Fackrell in Round 3 – though he wasn’t envisioned as a dominant edge rusher. In his third year, Fackrell surprised almost everyone by recording 10.5 sacks. Whether he’s a one-year wonder is uncertain, but either way it took three years for Fackrell to begin to be a force on the edge.

In 2017, the Pack waited until the fourth round, and then selected linebacker Vince Biegel. Some thought Biegel could become the next Clay Matthews, though he seemed to lack size, power and quickness.

In 2018, as the lack of a strong edge rusher had become glaring, the Packers made the surprising choice of Oren Burks in the third round. But Burks was envisioned as an inside backer, not an outside edge rusher.

It would be hard to pick between wide receiver and outside linebacker as being the most gaping hole, or holes, in the team’s lineup – but each has been a weakness for three years running. Green Bay has done virtually nothing to fill either need through free agent market or trades. Will that change in 2019?

While the defensive backfield positions have also been weak spots, it hasn’t been for lack of trying. The allocation of high draft selections over the past five drafts for defensive backs – three first-rounders and four second-rounders – is the primary reason so many holes have emerged elsewhere.

Given the team’s recent draft history, I won’t even venture a guess at which holes the Packers will address foremost in the upcoming draft. With almost two months to go before the draft, it’s the silly season for prognosticators, with some calling for a safety, a guard, a tight end, or a defensive end to be selected early on.

From 2010 through 2014, the Packers never finished below ninth in passing yardage. From 2015 through 2018, they’ve never finished above seventh, and twice they’ve finished 25th. For Aaron Rodgers to have commanded the ninth best passing attack (yardage-wise) in 2018 was quite an accomplishment – considering he was supplied with only one productive and experienced wide receiver.

Speaking of accomplishments, DC Mike Pettine had little to work with to produce a pass rush in 2018. Clay Mathews and Nick Perry managed just five sacks – not each, but combined. Without these two, his defenders still managed to finish the season with 44 sacks – eighth best in the league.

He did it by using a lot of deception, and involving all of the positions. The linebacker corps, led by Kyler Fackrell, had 24; The D-line, led by Kenny Clark, had over a dozen, and six different DBs accumulated 5.5 more. Another unexpected strong contributor was ILB Blake Martinez, who was third best on the team with five sacks.

Previous Article
News: WR Randall Cobb Not Likely to Be Around Next Season
Next Article
McCarthy Spending His Free Time Yelling at High School Basketball Referees