by Ed Rooney
in Articles & Analysis
42

According to reports, the Packers appeared to have found their new head coach, as 39-year old Matt LaFleur has been offered the job:

From @NFLTotalAccess: The #Packers are hiring #Titans OC Matt LaFleur, a bright young offensive mind to come in and challenge QB Aaron Rodgers, as their new head coach. pic.twitter.com/bvqCuk0HLD

Offensive coordinator for the Titans in 2018, LaFleur has a history at the quarterback position, playing for Saginaw Valley State from 2000 through 2002. In fact, he lead the team to three consecutive playoff appearances and excelled as a senior, throwing 20 touchdowns while rushing for five more.

Although the Titans had just the 27th ranked offense behind LaFleur, but starting quarterback Marcius Mariota missed three games and often played with nagging shoulder and elbow problems, hindering his accuracy. LaFleur made the most of the situation, grooming young wide receivers.

The hiring of LaFleur isn’t without risk, but his type of hiring is become the norm in the NFL. Sean McVay and Matt Nagy were promoted to head coaching positions with relatively little experience as offensive coordinator and now the hiring of LaFleur continues the trend. LaFleur began his coaching career as an offensive assistant with Saginaw Valley State in 2003 and following two seasons as offensive assistant at Central Michigan, became the quarterbacks and receivers coach for Northern Michigan in 2006 and offensive coordinator for Ashland in 2007.

LaFleur landed his first NFL coaching job in 2008, when he became offensive quality control coach for the Houston Texans. After two seasons in Houston, LaFleur was hired by the Washington Redskins as their quarterbacks coach. He held the position through the 2013 season before returning to the collegiate level for a season at Notre Dame in 2014. Following a two-year stint as quarterbacks coach with the Atlanta Falcons, LaFleur was hired as offensive coordinator for the Rams in 2017.

Despite not yet turning 40-years old, LaFleur has a tremendous amount of experience working with quarterbacks. Among the list of those he’s coached include Donovan McNabb, Marcus Mariota, Matt Ryan, Jared Goff, Kirk Cousins and Robert Griffin III. It must be noted that LaFleur was quarterbacks coach for the Falcons the year Ryan won league MVP. His work with quarterbacks will undoubtedly be attractive for Aaron Rodgers, who has formed bonds with assistants in the past who were former quarterbacks.

During his journey through the coaching ranks involving many teams both collegiality and professionally, LaFleur has had the guidance of top coaches in the country. LaFleur was connected to Gary Kubiak in Houston, Kyle Shanahan in Houston, Washington and Atlanta. LaFleur served under Dan Quinn in Atlanta and connected to Sean McVay while with the Redskins. The connection with McVay was instrumental in landing him the job with the Rams. Long time NFL player Mike Vrabel and current Titans coach handed over the play calling duties to LaFleur this past season.

It’s worth noting that Matt’s brother Mike also has NFL coaching experience, currently wide receivers and passing game coordinator for the 49ers. Considering the brothers worked together on the staff of the Atlanta Falcons, it is possible the Matt would entertain the thought of reuniting with Mike on the same staff. However, indicates have it that Mike is leaning on remaining with the 49ers.

The job LaFleur has done with quarterbacks has been impressive. Going back just two seasons, Jared Goff had an MVP caliber season after being somewhat of a bust his rookie season. Matt Ryan put up 38 touchdown passes for the Falcons the prior season during his MVP campaign. LaFleur was the position coach in Washington when Robert Griffith III took home MVP honors and LaFleur also helped developed Kirk Cousins into one of the better starting quarterbacks in the league. While Aaron Rodgers is a lock to be a Hall-of-Famer following his playing days, he will benefit from the teaching of LaFleur and could be in for a MVP type season in 2019.

Also interesting to note is that he plans to mostly keep the defensive coaching staff intact:

They're working on finalizing a deal. This also is expected to help keep Mike Pettine and the defensive staff intact, I'm told. https://t.co/3TSxdyTCpV

#Packers DC Mike Pettine, still under contract, was on new coach Matt LaFleur’s list when he presented during his interview, source said. The early expectation is that Pettine stays in Green Bay, though Lafleur will make a firm call when it’s official. 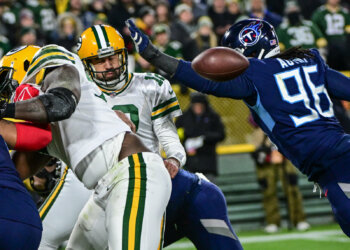