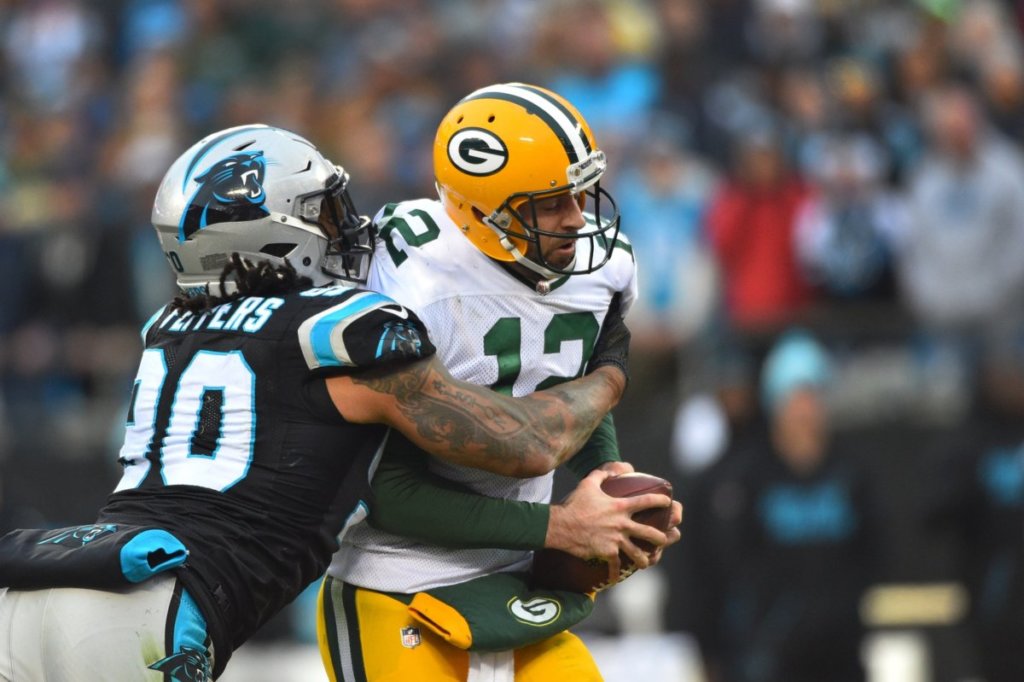 It’s time to stop pussyfootin’ around: if Aaron Rodgers wants to RETURN to being a top-tier quarterback, and lead his team back to making postseason runs at the Super Bowl, he needs to COMMIT to drastically reducing his sack numbers.

I’ve ranted about this before, and now I have another year of stats to pound the point home.

January 20: Jared Goff, sacked once for an 8-yard loss, leads his team into the Super Bowl. Tom Brady does the same thing, without being sacked. Their counterparts: six sacks for losses totaling 53 yards.

Sacks are bad. They lead to quarterbacks playing injured, missing games, and going on IR. They also, by definition, result in a lost down and loss of yardage. Significant lost yardage plays are drive killers. Yesterday, Mahomes badly affected his game’s outcome by losing 46 yards on his four sacks.

How many times have you seen a sack move a team out of field goal position? That’s plain stupid, on the part of the quarterback, or coaches who don’t emphasize it, or both. Patrick and Andy Reid, shape up. I believe the Packers made the same error more than once this past season.

In this top 12 list, how many postseason QBs do you see? I see three, with Watson and Wilson quickly losing their wild card games, and Prescott going 1-1 in the playoffs.

While I’m at it, I can almost hear the bitching about our lousy offensive linemen. I believe, however, that Rodgers has had better than average pass blockers almost his entire career, usually right around top ten in the league. Poor pass protection has been a minor cause of Rodgers being sacked – the QB holding the ball too long is the major cause.

Most quarterbacks increasingly gravitate to being pocket passers as they age. Many of the all-time greats were either always pocket passers or became ones: Fouts, Marino, Manning, Brady, and Brees – who now is way on top of the NFL’s all-time most passing yardage list.

As to Rodgers, I used to come right out of my seat every time Aaron broke out of the pocket. His passer ratings when doing so used to be in the 130’s, and good things were bound to happen.

In the last two or three years, however, Aaron’s ratings have been lower when he scrambles than when he doesn’t. Therefore, hanging onto the ball, trying to extend plays, and risking sacks are now hurting, not helping, this offense. I’ll say it again: when Aaron breaks out of the pocket and scrambles around looking for an open receiver, it’s counterproductive.

I’m all for Aaron continuing to look to run when he spots an opening – it’s a great weapon, and very few injuries occur when QBs take off running, because they can go into a slide. It’s those blind-side sacks and defenseless collisions that break bones.

Directing the focus on Rodgers, the trend is disturbing. First, we need to throw out – but learn from – 2013 and 2017, when Aaron played only nine and seven games – due to suffering broken clavicles when being sacked, or nearly being sacked (in the case of dirty Anthony Barr).

We keep hearing that the new coach is going to “challenge” Rodgers, and that Aaron should welcome the change after being increasingly smothered under McCarthy’s so-called leadership.

Getting sacked fewer than 25 times in 2019 would be an excellent challenge. It would greatly help keep offensive drives going, and might even aid in Aaron staying healthy for an entire season.

Previous Article
Packers Capable of Filling Many Holes in the 2019 Draft
Next Article
News: Mike Smith Will Join Packers Coaching Staff as Outside Linebacker Coach