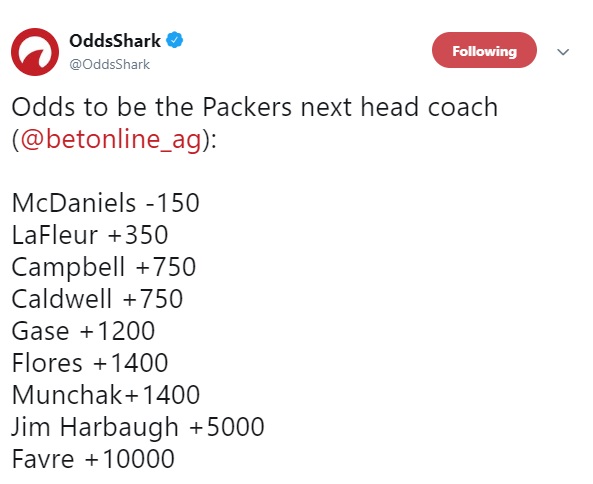 As expected, Josh McDaniels tops the list of new Packers coach candidates that are most likely to get the job. Wouldn’t expect Brett Favre to make the list at all but a sucker is born everyday and they will gladly take anyone’s bet on that. Also near the top is Tennessee Titans Offensive Coordinator Matt La Fleur who has an interview schedules for January 6th. This Kyle Shanahan disciple went to Super Bowl LI with the Falcons in 2016.

Whomever gets the job has a steep hill of drama and injuries to climb in order to turn the Packers into the winning team they have the potential to be. While some were happy to see him go, Mike McCarthy leaves a void that will not be easy to fill. Per Colin Cowherd, McCarthy is the most desired coaching candidate currently on the market:

Personally, I gotta agree with the oddsmakers and say that Josh McDaniels is looking more and more like the most likely candidate. What are your thoughts?