by Rob Born
in Articles & Analysis
31

The Packers clearly weren’t going to pay his current salary, but it was a shock to learn the team didn’t even try to re-negotiate his contract downward.

After being dumped on March 13, Jordy had to quickly implement Plan B, signing up with Jon Gruten’s Raiders for two years at $15 million, $13 million guaranteed – reasonable for both parties.

Jordy’s numbers for 2018 were: 63 catches, 739 yards, and three touchdowns. That’s less than desired production, but take a closer look at those figures.

With so-so quarterback Derek Carr doing the flinging, Jordy caught 38 passes, for 386 yards in his last five games. That’s more than double the catches and yardage in the first eleven games – what gives?

If those last five games were projected over 16 games, it would total 1,235 yards and way over 100 catches on the year. Jordy was also his usual efficient self as the season wound down, catching those 38 balls in just 48 targets.

In his five games prior to the above five games, however, had 2-1-2-0-0 catches, and gained but 36 yards while being target just twelve times. The Raiders apparently all but eliminated Jordy from the game plans in mid-season, but he proved in those final five games he has plenty of football life still in him.

The Packers pulled the same thing on another fan-popular receiver, James Jones. Journeyman Jones was never a 1,000 yard receiver, but he was a solid 600+ yarder six times in his nine-year career. When he got dumped in 2013, he also went to the Raiders where he had a decent year (73 catches, 666 yards, 6 TDs).

In 2015 he was with the Giants, but was cut days before the season opened. He appeared to be out of football. The Packers, again shorty of receivers, picked him up. He proceeded to lead the team, with 50 catches for 890 yards, 8 TDs and a sterling 17.9 catch average. It was a career year for Jones.

The Packers would never have “run the table”, finished 10-6, and sneaked into the playoffs without Jordy’s BFF, James Jones.

I doubt that the Raiders want to retain Nelson in 2019. The Gruden rebuilding program is going to take more time than anticipated. In trading away 24-year old star receiver Amari Cooper at the start of last year, the Raiders got a 1919 first round draft choice, so they now have the 4th, 24th, and 27th picks in the first round of the upcoming draft, and ten picks out of the first 100. By comparison, Green Bay is thrilled to have four of the first 76 picks.

The Raiders need to be acquiring and developing young players for the future, not relying on a player nearing retirement. 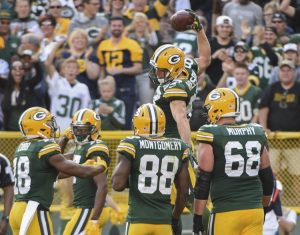 Bringing Jordy back poses little risk, and not a great deal of expense. His pay desires have always been reasonable. Should he fall back to his 2017 level of performance, then he can be platooned with the youngsters. Plus, he’s stayed very healthy except for the ACL injury. Oh, and he won’t take three or more years to get in sync with our persnickety QB.

This might be sounding like a familiar refrain, but actions have consequences and we must try to learn from them. I believe the Packers would have increased their win total by probably two games last year had Jordy not been thrown by the wayside. And they still could have found time to bring around their low-round draftee receivers, but more gradually.

Brian Gutekunst was the brand new GM when the Packers decided to cast off Jordy go in 2018. He messed up, especially since he only had one game-ready wide receiver to put on the field when he did so.

Hey Brian, it’s not often you get the chance for this kind of redemption. Bring Jordy back!

For a Preview of the 2019 Packers Offense, Watch the Rams Game

For a Preview of the 2019 Packers Offense, Watch the Rams Game