So, we’re all wondering whether the head coaching change will lead the Pack back to the promised land.

Though many theories can be explored, I’d start with how the arrival of Matt LaFleur should vault Aaron Jones into his proper place as one of the league’s star running backs.

At least we no longer have to scratch my head over Big Mike’s bizarre handling of Jones. It no longer matters why McCarthy failed to exploit Aaron’s talents. I hope, however, that it played a major role in CEO Murphy’s decision to dismiss him. That would be just desserts for his mishandling of such a game-changer.

Jones is a great feel-good NFL story, and he was one of the biggest steals of the 2017 draft – credit to the draft team who I believe at that point had effectively taken over the duties of GM Ted Thompson.

Just in case there are those who still don’t think Jones is special, I’ll recap.

The fifth-rounder out of UTEP (19th RB overall) was virtually the only talented player in El Paso during his four years with the Miners. Every defense UTEP faced had but one focus: stopping the small but well-built running back and his lightning-quick changes-of-direction. Very few opponents held Jones down. Just to sum up, in four years at UTEP, and despite some injuries, Jones rushed for 4,114 yards and averaged 6.3 yards per carry. Counting his 71 receptions, he accounted for 40 of the team’s touchdowns. Jones still frequents El Paso in the off-season, where he remains revered by the locals.

From 2013 through 2016, Jones was UTEP football. Though the team had 18 wins and 31 losses in that time, they probably don’t win a half-dozen games without Aaron. Minus Jones, the Miners went winless in 2017.

Here’s what the scouts said as he was about to be drafted into the NFL: “good vision”, “lateral burst gets him outside the tackles quickly”, “always seems to find the best opening”, “makes tacklers miss in the open field”, “never giving up on the play and consistently getting hidden yardage”, “home run ability”. Doesn’t that pretty well also describe his NFL performance to date?

How was Aaron used during college? As often as possible. On 10/29/17 I did a posting titled “Nothing Has Ever Stopped Aaron Jones – Except Injuries.” That article documents what the Packers were getting. Jones was made UTEP’s workhorse, and the more touches he got the better he played. By the time he finished up in 2016, he possessed the school’s single season records for rushing yards (1,773), carries (229), and rushing average (a gaudy 7.7). He averaged 19.2 carries per game, and he got better every year.

He capped his career against North Texas with 301 yards on 24 attempts, four rushing touchdowns, and 312 all-purpose yards. That’s efficiency: 12.5 yards per carry.

Now that he’s been a pro for two years, it’s time to update that header: “Nothing Has Ever Stopped Aaron Jones – Except Injuries and Mike McCarthy”.

We’ve all seen how Big Mike utilized Aaron, despite him being an immediate dynamic presence in the NFL. In the second game that Jones saw action – a 35-31 win at Dallas – Aaron outplayed Ezekiel Elliott, with 19 carries for 125 yards, a 6.9 average. He’s never since had that many carries; in fact he’s only exceeded 15 carries four times in two years. 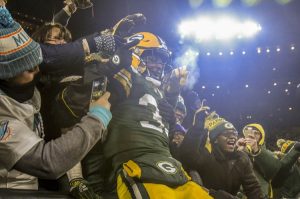 In his final six games under Big Mike in 2017, he was handed the ball a total of 19 times. Though he as usual averaged well over five yards a carry, he was a non-factor as playoff hopes slipped away. The exception was when he got his sole carry in overtime against the Bucs, and ran it in from 20 yards out to account for the win.

The Pack dropped their final two games of the year, missing the playoffs – Jones had three carries in each loss, Unfortunately, Jones was injured early in that season finale against the Bears – and there went the season. Even then, he turned those six chances into 60 yards.

This all begs the question: how many wins did the under-usage of Jones cost the team in 2017, and then again in 2018? My sense is that it probably cost us two wins each year. If so, this factor all by itself kept the team out of the playoffs each time.

My biggest gripe about how Jones was utilized by McCarthy is simply that he was rarely given a carry designed to go outside the tackles – this is where his lateral quickness, vision, and shiftiness comes into full play. I’m hoping LaFleur will give Jones from 15 to 20 carries per game, with at least five being sweeps or otherwise meant to veer outside the tackles. This would spread the field sideways and discourage defenses from “stacking the box”. 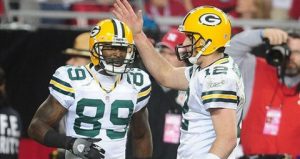 How will the arrival of Matt LaFleur impact Jones? As Tennessee’s play caller, LaFleur had a bruising RB in 247-pound Derrick Henry. In Tennessee’s first four games, Henry got the ball 16, 21, 33, and 17 times. Though shrimpy, Dion Lewis started getting his share of snaps, Henry finished the year with 215 carries for 1,059 yards – and I nice 4.9 yard average.

Unless injuries interfere, the Packers should have their first 1,000 yard ground gainer since Eddie Lacy went for 1,139 yards in 2014. And that should translate into the Pack returning to the postseason.