It is Green Bay Packers coach Mike McCarthy who says the best ability is availability. Honestly, we think that’s about the dumbest thing Gravy Head has ever said.

The best ability is, you know… actually kicking ass at something.

A.J. Hawk was always available. He kicked ass at just two things. Jumping on piles and losing his goddam helmet. So there’s your availability argument.

Packers right tackle Bryan Bulaga would fit into neither of these categories.

He isn’t good. He’s not very available, either. 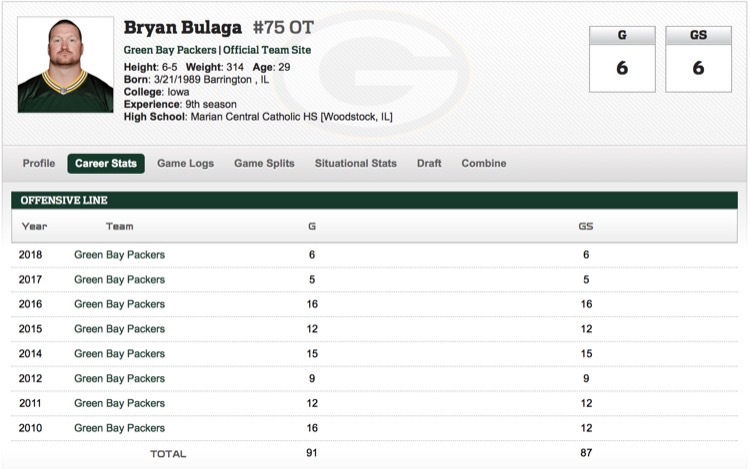 I mean, look. I don’t even want to add the missed games up.

It isn’t because I’m lazy or can’t do math. It’s because I’m tired of talking about this asshole being injured.

Bulaga came up with a new knee injury this past week. He played anyway, at least until, guess what?

He pulled up lame with another injury.

The Packers moved starting right guard Byron Bell to right tackle when Bulaga went out. That brought in Lucas Patrick at right guard.

Is Bulaga going to be ready to get back on the field after the bye?

He is absolutely the most replaceable component on the Packers offensive line. Bulaga is okay as a pass blocker, but he’s a garbage run blocker.

That makes him an average offensive lineman at best.

If the Packers were to lose David Bakhtiari, currently PFF’s highest-graded tackle, they would be in a world of shit. If they lost Bulaga, well, Byron Bell is the same guy.

There was actually talk of the Packers cutting Bulaga after he refused a pay cut this past offseason. Seems like that would have been a wise move.

But go ahead and tell me more about availability being the best ability.