Packers Get Fucked In DC

by Mordecai Jones
in Uncategorized
57

Aaron Rodgers was on. Aaron Jones was on. The Green Bay Packers were not on.

It was almost predictable. That the Packers would drop a game on the road to an inferior Washington team.

How did that happen?

Washington was three-for-five in the red zone. The Packers were one-for-two. That’s a better percentage than last week, but they couldn’t really get there, could they?

Let’s talk about dropped passes. Randall Cobb was targeted 11 times. He caught four fucking balls. We could say that any of his drops were big, but the one on fourth down late in the game was huge. Randall Cobb sucked a sack of ass on Sunday.

And, hey, let’s let our old foe Adrian Peterson trounce all over us again! Good job, guys! You haven’t seen the child beater enough to be able to stop him? Really, just tremendous.

This is the bottom line.

The Packers’ defense isn’t any better than they’ve ever been. Jaire Alexander may be an alpha, but if you’re giving up 31 to an Alex Smith quarterbacked team, you’re shit.

Clay Matthews can’t touch a quarterback without getting flagged. How about that shit? Wonder what bullshit the league will serve up this week about this textbook tackle.

And if the fucktards that are supposed to be catching passes from Aaron Rodgers can’t do that, then this is what you get.

Losing a shit game to a shit team.

Clay Matthews Is Somewhat Off The Hook 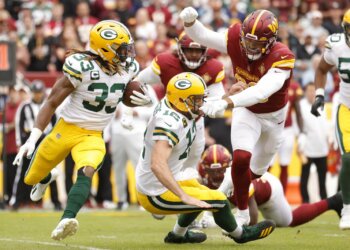